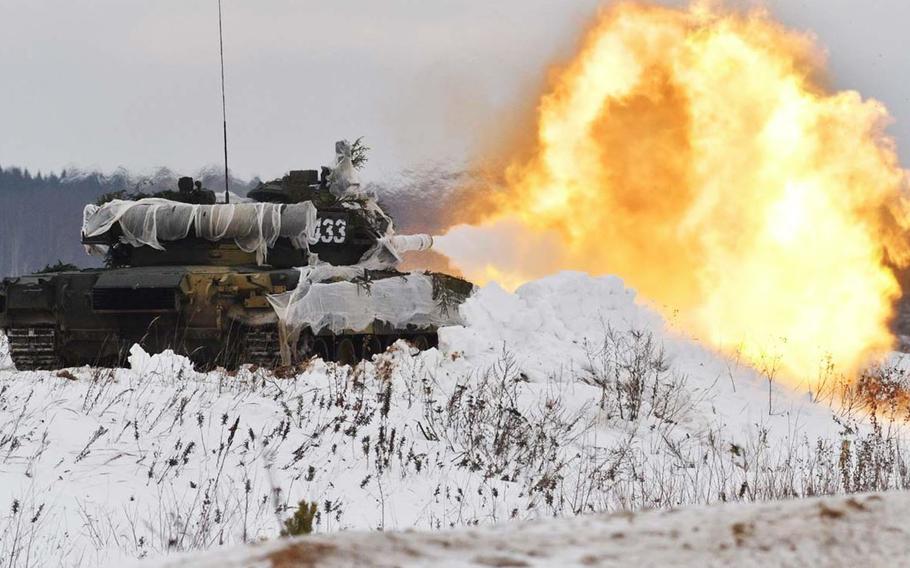 A Russian tank fires during a training exercise near Moscow. Russia reportedly will beef up its Baltic Fleet with a tank regiment and a coastal defense missile battalion. (Courtesy of Russian Ministry of Defense)

STUTTGART, Germany — Russia will add new tank and missile defense units to its Baltic fleet this year along with more modern weaponry for forces positioned in the vicinity of NATO turf, the country’s defense minister said.

Defense Minister Sergei Shoigu told Russian state media on Wednesday the moves were a response to NATO’s growing presence in and around the Baltics.

“We are forced to provide an adequate response, carrying out strategic containment events with the plans of stepping up combat capabilities of military formations and units,” said Shoigu, as quoted by the TASS news agency.

As part of a reorganization of its forces, Moscow wants to bolster its coastal defenses with a missile defense battalion, a tank regiment and two other army regiments, Shoigu said.

“The efficiency of providing cover for military and state facilities in the Baltic operational area will increase by 40 percent,” he said.

The military also will implement 142 unspecified “organizational measures,” he said.

The Russian military also is moving forward with the construction of new garrisons for recently formed units in Russia’s Western Military District, home to the newly formed 3rd and 144th motor rifle divisions of the 20th Army.

The Russian defense chief described the efforts as a counter to NATO’s enhanced military pres-ence in the Baltics, where the alliance now has multinational battlegroups in all three Baltic states and Poland.

While Moscow routinely lashes out at NATO’s moves along the alliance’s eastern flank, allies say Russia’s aggressive moves are to blame.

Before Russia’s 2014 annexation of Ukraine’s Crimea Peninsula, allies had minimal military presence in the Baltics and Poland. but Moscow’s use of military force rattled member states and launched a push inside NATO to elevate its combat readiness.