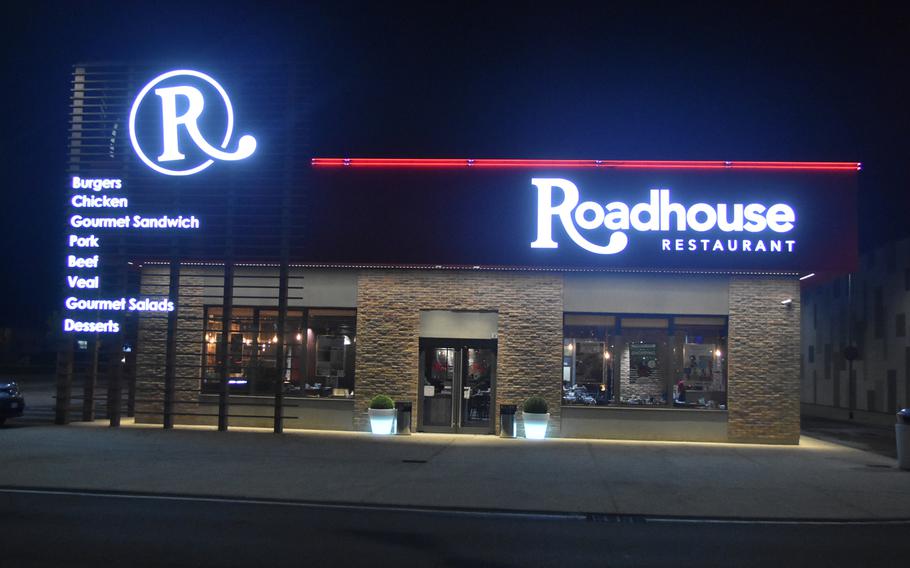 Buy Photo
The Roadhouse restaurant in Conegliano, Italy, is located in a shopping center off the SS-13, about a half hour's drive from Aviano Air Base. (Kent Harris/Stars and Stripes)

Buy Photo
The Roadhouse restaurant in Conegliano, Italy, is located in a shopping center off the SS-13, about a half hour's drive from Aviano Air Base. (Kent Harris/Stars and Stripes) 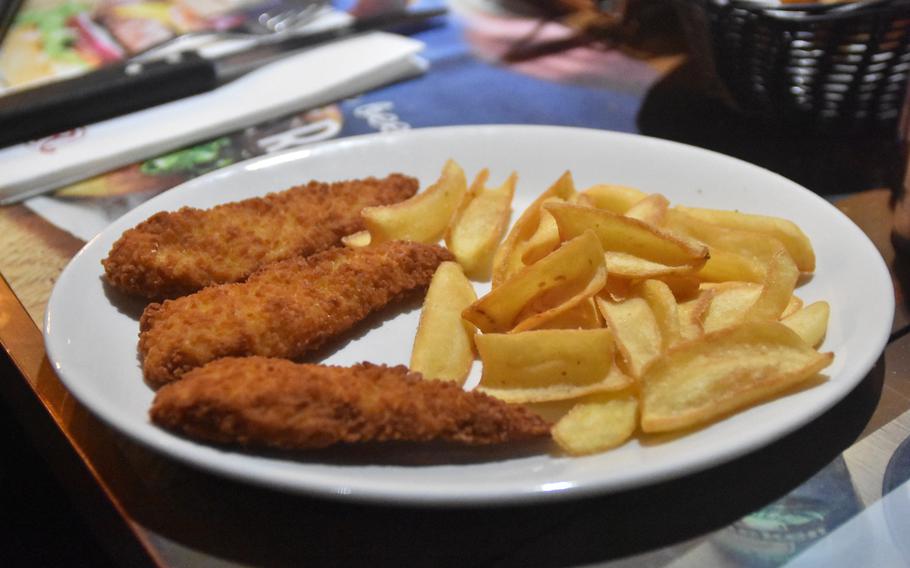 Buy Photo
One of the options on the children's menu at Roadhouse is chicken stripes and wedge fries (along with a drink). (Kent Harris/Stars and Stripes) 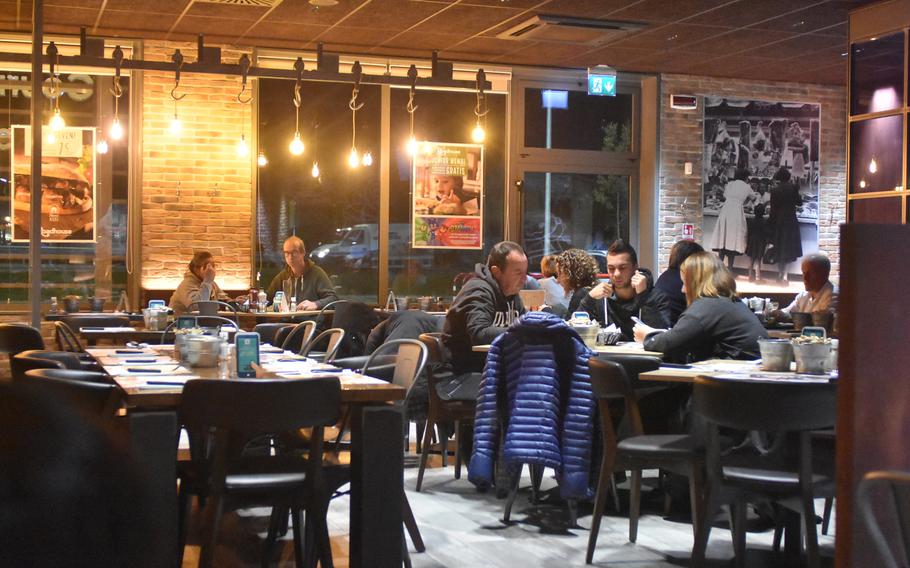 Buy Photo
The interior of the Roadhouse restaurant in Conegliano, Italy, is similar to others in the chain. (Kent Harris/Stars and Stripes) 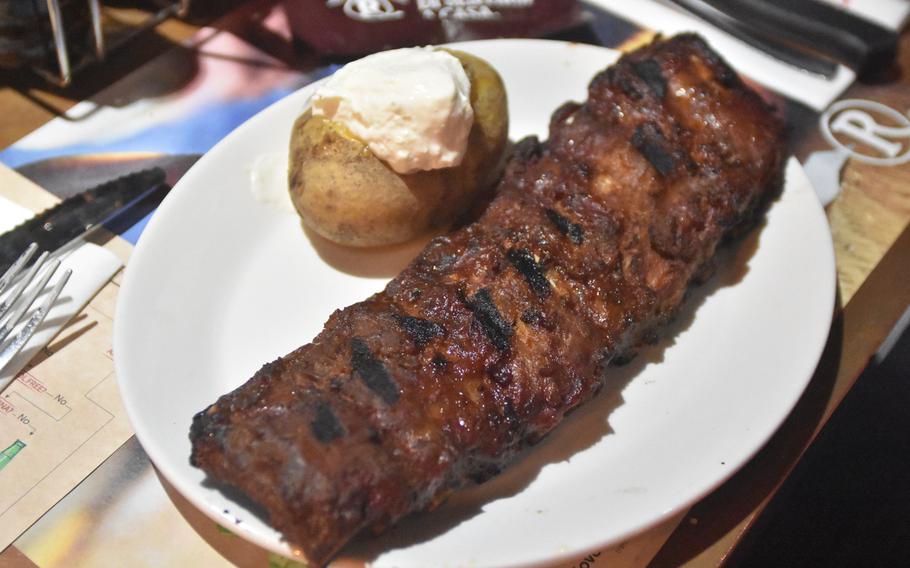 Buy Photo
Want a rack of ribs and a baked potato? The Roadhouse restaurant in Conegliano serves both seven days a week. (Kent Harris/Stars and Stripes) 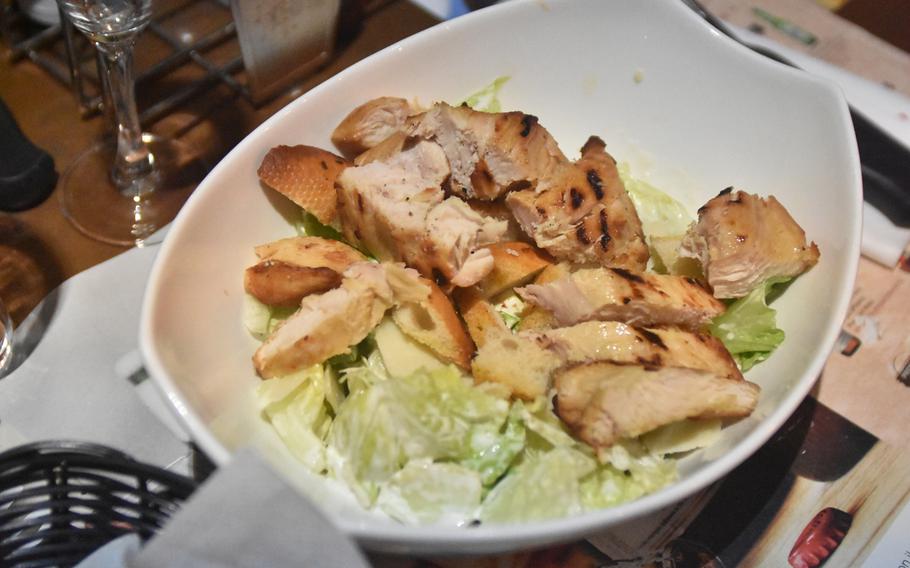 Buy Photo
The Chicken Caesar Salad at the Roadhouse includes a lot of chicken as well as lettuce, slices of Parmesan cheese and dressing. (Kent Harris/Stars and Stripes) 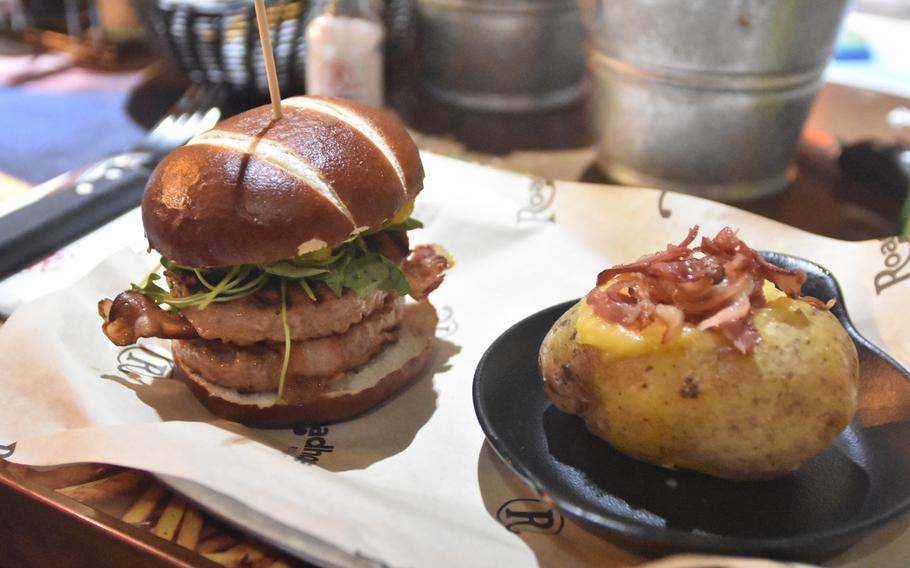 Buy Photo
One of the sandwich options at the Roadhouse is the Double Pork. It features a pretzel-like bun, two pork patties, bacon, arugula, onions and a salsa. A baked potato (with cheese and bacon in this case) is available as a side. (Kent Harris/Stars and Stripes)

I had dined at the Roadhouse chain of restaurants before while visiting the Tiare shopping mall near Villesse just a few miles from the Italian border with Slovenia.

And I wrote a review of it for Stars and Stripes.

But since then, a new location has opened much closer to Aviano Air Base. So I checked it out to see if the food and service is standard at locations throughout the chain.

At least in this case, the answer is yes, which is good news for Americans looking to get away from Italian food and get a taste of home — especially if your home tastes like large chunks of red meat.

There’s no pasta or pizza on the menu. There are more than a dozen choices involving steak or at least beef. Add in a half dozen choices for hamburgers and a handful of sandwich options.

Three salads (all with plenty of meat) offer an alternative for those who want something green as part of their meals. And having those might lead you to believe, incorrectly, that indulging in an array of decadent dessert options is still OK health-wise.

Diners going for meat can easily add an extra side dish, such as potatoes or vegetables, for a few euros more.

There’s a separate menu for kids, and children are given colored pencils and paper to entertain them. There’s also a room with projected images where kids can run around, or just throw themselves on the floor.

Another positive is that diners don’t have to remember which days of the week Roadhouse is open. It’s open for lunch and dinner without any regularly scheduled closing times.

Address: Via Villa Liccer 1, San Fior, ItalyDirections: From Aviano, follow the SS-13 toward Congeliano. The restaurant is on the left in a new shopping center. Turn left at two roundabouts to enter the center.Dress: CasualMenu: In Italian, with plenty of English sprinkled in (much of staff speaks at least some English).Food: Italian interpretation of American diner/steakhouse food. Menu (with prices and to-go options) listed extensively on the website. All-you-can-eat ribs and wings on Sundays.Hours: Open for lunch and dinner daily.Phone: 0438-403880Online:roadhouse.it