Retiree Tricare hikes rejected; disabled vets to shop on base 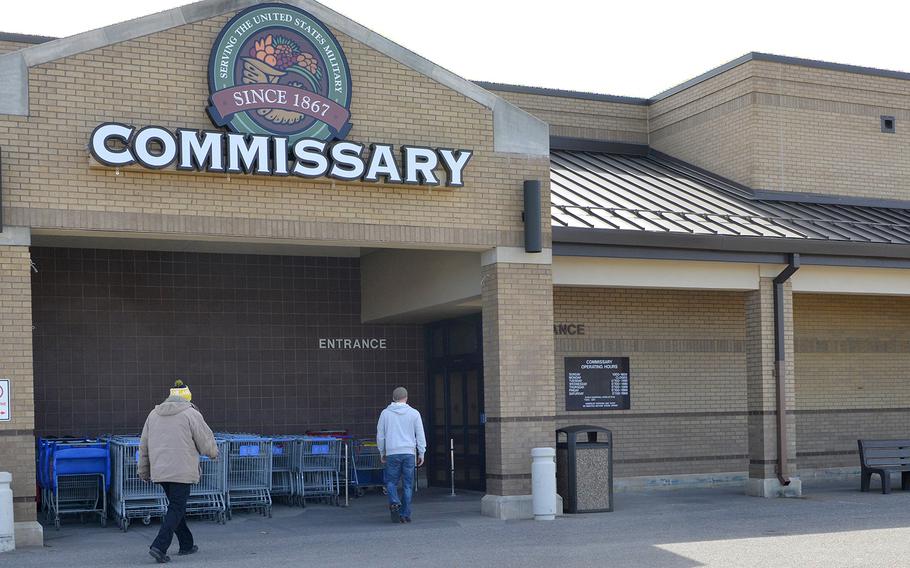 Airmen, their families and retirees prepare to enter the Commissary Feb. 27, 2014, at McConnell Air Force Base, Kan. A House-Senate conference committee accepted House language to open base stores and services, starting in 2020, to any veteran with a service-connected disability, as well as to Purple Heart and Medal of Honor recipients, former prisoners of war and veteran caregivers. (revor Rhynes/U.S. Air Force)

A House-Senate conference committee tasked with ironing out differences in separate versions of the defense authorization bill has rejected Senate-passed provisions that would have sharply increased Tricare fees, deductibles and co-pays for a million retirees under age 65.

Lawmakers who in recent weeks shaped a final $716 billion John S. McCain National Defense Authorization Act for Fiscal Year 2019 (HR 5515) also voted to allow disabled veterans, Purple Heart recipients and caregivers of veterans severely injured in war to shop on military bases, paying slightly more at checkout than current patrons. They also will be able to use base recreational facilities.

Expansion of access to on-base services, which the Department of Defense endorsed in part to make commissaries more self-sustaining, is to occur Jan. 1, 2020.

Conferees also narrowed the scope of Senate-passed reforms to officer accession and promotion practices so officers will continue to be considered for promotion as part of the same year group they were promoted to current rank.

Also shelved was the Senate plan to repeal use of authorized officer strength tables to instead require that Congress annually authorize the number of officers allowed to serve in the ranks of O-4 through O-6 across all the services.

However, a host of other accession and promotion reforms survived the conference and will “begin to modernize officer personnel management to bolster the effectiveness, recruitment and retention of the all-volunteer force,” says a Senate Armed Services Committee press release.

“The 38-year-old Defense Officer Personnel Management Act requires all military services to manage their officer corps in the same general manner within specific constraints. By beginning to reform this system, the [2019 defense authorization bill] will provide for flexibility in the careers of commissioned officers [to] better serve the demands of the modern force.”

Repeal a requirement that candidates for regular commissions not be older than 42, or at least have enough service years to complete 20 years by age 62. Enhancement of services’ authority to award constructive service credit for special private-sector training or experience to allow active or reserve officer appointments up to the rank of colonel or Navy captain in critically needed fields. Authorizing each service to award temporary promotions to the ranks O-3 through O-6 for specified positions. Only the Navy has such authority today, so this change would standardize it across all branches. Authorizing promotion boards to recommend that “officers of particular merit” be placed higher on promotion lists than peers. Allowing officers, when deemed in the best interest of the service, to have their names removed from consideration by a selection board for promotion to the next higher grade, and authorizing officers in certain military specialties to remain on active duty until reaching 40 years active service. Authorizing use of alternative promotion processes for officers in certain secretary-designated competitive categories, to include a term-based continuation process when certain officers are not selected for promotion. This would selectively end the traditional up-or-out requirement for officer management. Conferees rejected House language that would have required the Air Force to assess the “feasibility and advisability” of allowing otherwise qualified candidates who are deaf or hearing impaired to be Air Force officers.

Compensation — The highlight of compensation provisions embraced by conferees was decided months ago: a 2.6 percent military pay raise effective Jan. 1, 2019, to match recent wage growth in the private sector. It also will be the largest percentage military pay increase in nine years.

Tricare fees blocked — Military associations lobbied successfully against Senate language to repeal an unusual grandfather provision in current law that protects working-age retirees from a host of Tricare fee increases that, for now, target only members who enter service this year or later and eventually retire.

Senators wanted the higher Tricare cost-shares applied to all current and future retirees under age 65 and not disabled, as the Defense Department intended. Conferees blocked that but said they “remain concerned about the high cost of military health care, understanding that much of the cost has been driven by new benefits and benefit enhancements authorized by Congress.”

With the Congressional Budget Office estimating the average military cost of providing health care to a typical retiree household at $17,800 by 2021, conferees directed the defense secretary to update that estimate by next February and to list policy options both to improve quality of health care and to better control costs.

The compromise bill also directs that a survey be conducted “to ascertain whether beneficiaries would be amenable to additional modest fee increases to maintain a fiscally viable, comprehensive health benefit.”

The sweeping fee increases blocked included a first-ever Tricare Select enrollment fee and, for retirees who use non-network providers, a new annual deductible. CBO estimated that retiree users of Select would have seen average out-of-pocket costs jump from $1,645 a year to $2,800 for family coverage and from $570 to $1,160 for self-only coverage. Retiree households using Prime would have seen more modest increases. Tricare for Life recipients would been spared.

More shoppers — Commissaries and exchanges nationwide are expected to see a few hundred thousand more shoppers. Conferees accepted House language to open base stores and services, starting in 2020, to any veteran with a service-connected disability, as well as to Purple Heart and Medal of Honor recipients, former prisoners of war and veteran caregivers.

Defense officials supported the House-backed provision, to strengthen the military resale system and to reward deserving veterans with shopper discounts, if an extra user fee could be imposed on these “secondary” groups of store patrons.

A department study concluded that “a large influx of new patrons is necessary to continue efficiently providing commissary and exchange benefits into the future.” Military associations and veteran groups also had backed the move.

Trump parade — Conferees modified House language in support of the president’s call for a Washington, D.C., military parade. The conference report says it’s “appropriate to honor and celebrate 100 years of patriotic sacrifice in a way that expresses appreciation and admiration for our men and women in uniform.” But the bill “prohibits the use of operational units or equipment in the parade if the Secretary of Defense believes such use will hamper readiness.”