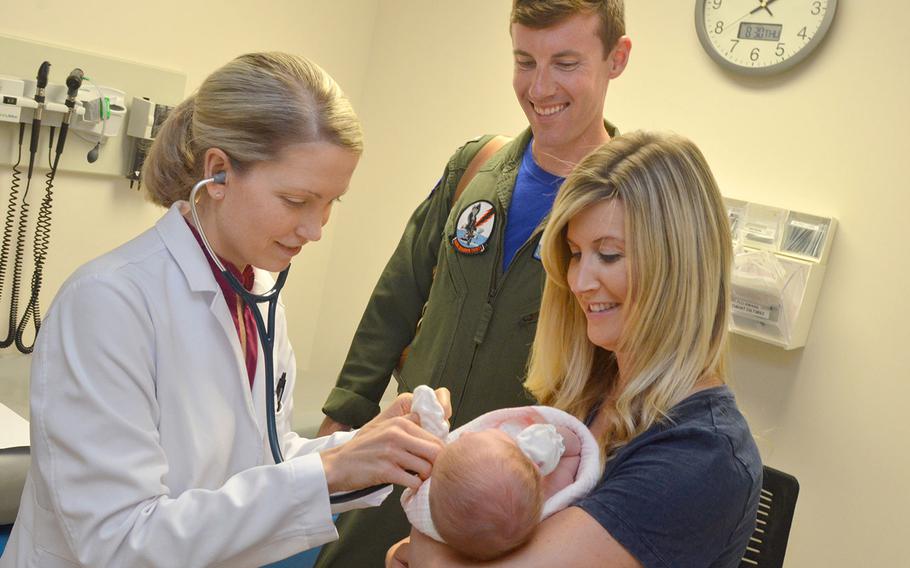 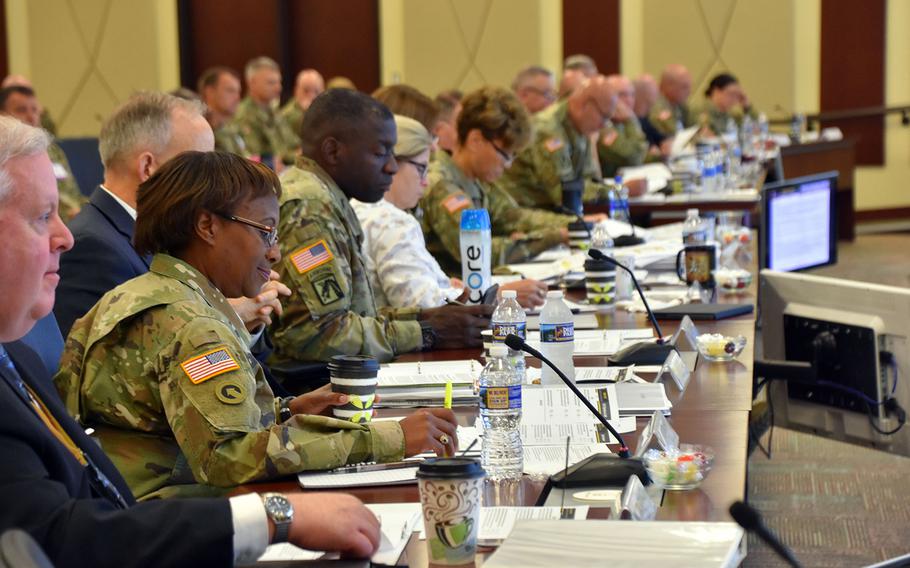 Leaders from across the Department of Defense, the Army and Fort Bragg meet at Forces Command Heaquarters July 19, 2018 to discuss the upcoming transition of the administration and management of Womack Army Medical Center from the U.S. Army Medical Command to the Defense Health Agency. (Eve Meinhardt/U.S. Army)

As envisioned and directed by Congress two years ago, this was to be the month that the 5-year-old Defense Health Agency (DHA) assumed management responsibility for all Army, Navy and Air Force health care facilities, which includes 59 hospitals and 360 clinics across the nation and at U.S. bases overseas.

But given the complexity of such transfers, and to protect medical readiness, Congress in August extended its original deadline for consolidating health care facility operations by a full three years, until Sept. 30, 2021.

The Defense Department in June rolled out a final implementation plan for sweeping health system reforms lawmakers directed in the fiscal 2017 defense authorization act. The revised plan described recent steps by the department to modernize governance of the health system. It also urged a more gradual phase-in for streamlining and standardizing of health care delivery under DHA.

Congress granted that request, with extension language in the fiscal 2019 defense policy bill that the president signed Aug. 13. Lawmakers declined, however, to grant the defense secretary authority to waive specific requirements of the consolidation if he determines more delays are necessary to keep the pace of transfer feasible or to preserve medical readiness.

Instead, Congress further strengthened the role of DHA director and more precisely defined responsibilities for medical readiness that remain with the Army, Navy and Air Force surgeons general. These include: assignment of uniformed medical and dental personnel to military health facilities; ensuring their medical readiness; providing logistical support and training for deployment, and overseeing their mobilization and demobilization. Surgeons general remain responsible for ensuring the medical force can support the warfighter. They also will continue to fill uniformed leadership positions across the military health system.

Congress also directed that no military treatment facility be closed or downsized without the department first submitting a report to the Armed Services committees on methodology and criteria used for the decision. It further ordered DHA to stand up two subordinate organizations: one for research and development and another for to focus on public health issues.

“This is probably the biggest transformation of the military health system in history,” or at least for decades, Adirim said, requiring “a huge list” of changes to integrate operations in DHA from across military medical departments.

“To do that in a short period of time is hugely challenging. So, we needed the time to do the planning and then begin to make sure all functions coming under the DHA are successfully transferred. We thought doing this phased approach would reduce risk and give us more time to ensure we get it right.”

The reforms have several goals. One is to lower costs by ending duplication of effort and inefficient use of resources from having three services run separate medical departments. Another is standardizing care experiences across the military by adopting identical clinical practices and processes.

As responsibilities of the DHA director expand and those of the services and their surgeons general narrow, the shift should be invisible to the nine million beneficiaries of military health care, Adirim said.

“They’re not going to see any difference in the level of service or care except, we hope, eventually they will see improvement and a more standard [care] experience,” she said. “This transition is really impacting mostly headquarters.”

The plan unveiled in June does project both health care savings and overall staff reductions as the Army, Navy and Air Force lose medical headquarters personnel in numbers greater than staff growth planned at DHA.

“The Department has already programmed a 25 percent reduction in manpower positions aligned to medical headquarters across the enterprise” and a $202.5 million cut in health plan costs tied to that effort, the report says.

More reductions are planned, it adds. But because service branches “will be supporting the transition of administration and management” functions to DHA through 2019, “the Department does not anticipate major reductions in headquarters manpower beyond the 25 percent reduction already established.”

When DHA was established in 2013, it took charge of certain “shared services” across the health system, including medical logistics, information technology, pharmacies, Tricare health plans, facility planning, medical research, acquisition, budget management, and medical education and training. This saved $2.3 billion from fiscal 2015 through 2017, the report contends.

It also identifies new reforms with potential to save $760 million more annually by fiscal 2023, through improved management of access to care, of purchased support services such as housekeeping and dietary services at military treatment facilities, and of medical facility operations including laboratories and radiology. DHA also expects to squeeze costs from Tricare support contracts.

Much of the final plan report focuses on a more streamlined governance scheme for the health system adopted earlier this year to speed up a “sclerotic decision-making process that has the effect of demoralizing staff and other stakeholders who seek to make timely improvements in [military health system] policy, readiness and health care delivery.”

Adirim conceded that it was her initiative to include dissolving many of 109 governance bodies for military health care created in recent years, and to shift the department from governing health policy too often by consensus rather than informed leadership. Adirim said the reference to low morale was an exaggeration for effect. But clearly leaders of military medicine have been getting bogged down in too many meetings, and lengthy staffing processes, to exercise their most effective oversight of a system undergoing a historic transformation.

“We would like to focus on performance and making sure to hold the components accountable for their responsibilities. And we thought we could do that better with a more streamlined government process,” Adirim said.

The planning report also emphasizes that needs of the warfighter are paramount. A key charge to DHA is to ready plans to continue providing health services to beneficiaries, including families and retirees, when military medical personnel are deployed from base hospitals and clinics.

DHA is going to have more tools to do that because “one point of consolidation is better integration of direct care and purchased care so we can flex that way. Because we’re all about readiness. That’s why we’re here.”