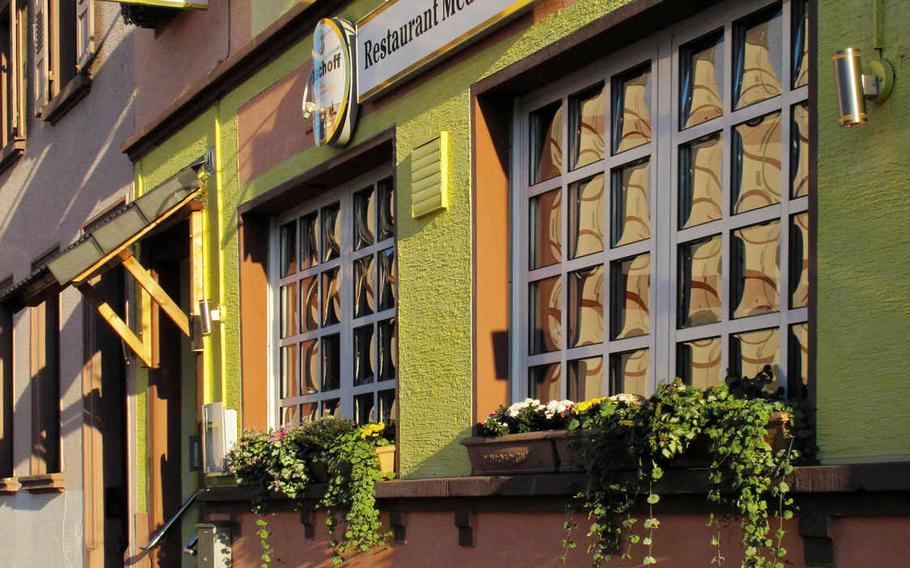 Mediterran, a restaurant that features meats and fish, stands out among the shabby storefronts on Pariser Strasse in Kaiserslautern, Germany. There is plenty of parking across the street. Andrew Yurkovsky/Stars and Stripes ()

Mediterran, a restaurant that features meats and fish, stands out among the shabby storefronts on Pariser Strasse in Kaiserslautern, Germany. There is plenty of parking across the street. Andrew Yurkovsky/Stars and Stripes () 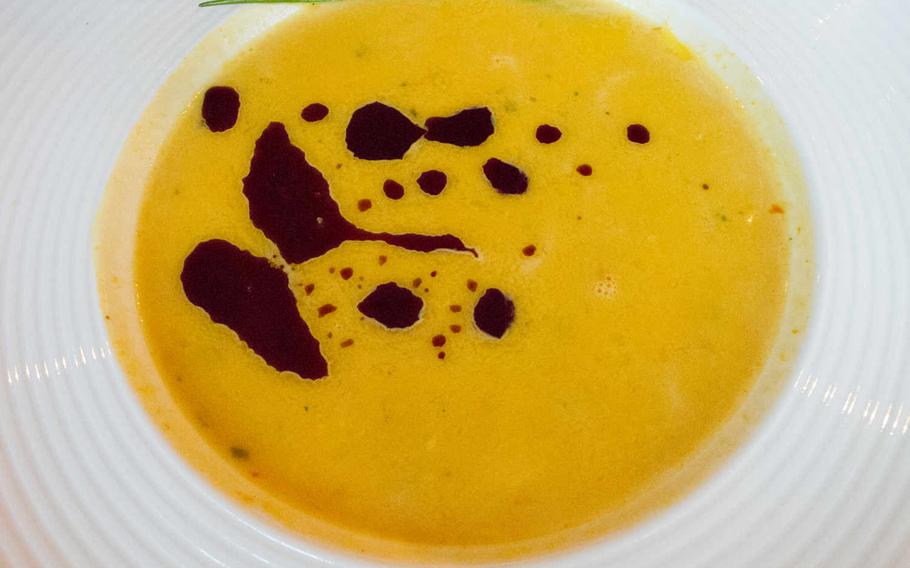 The pumpkin soup at Kaiserslautern, Germany?s Restaurant Mediterran was a minimalist masterpiece. Andrew Yurkovsky/Stars and Stripes () 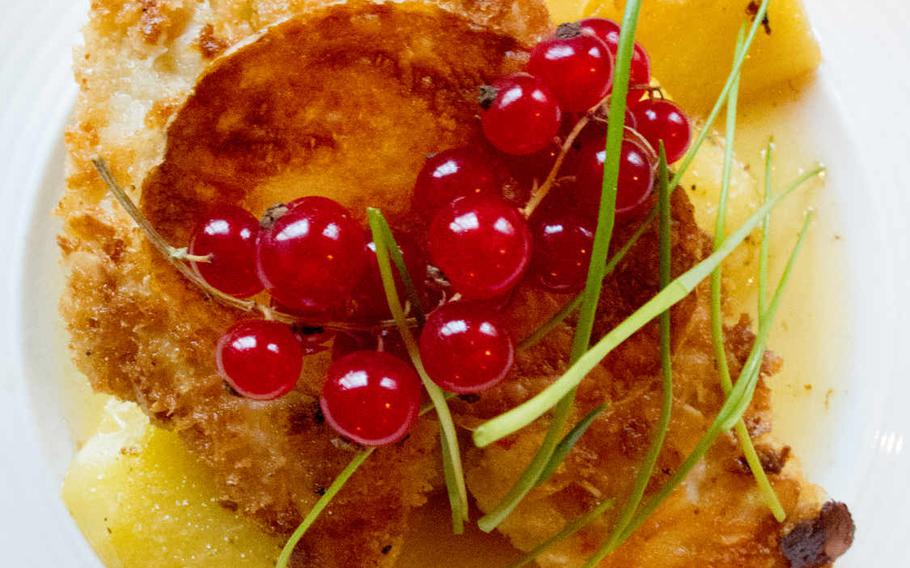 Restaurant Mediterran in Kaiserslautern, Germany, gets high marks for presentation. This cod filet, covered in almonds and topped with a sprig of currants, was visually appealing but a tad too oily. Andrew Yurkovsky/Stars and Stripes () For a tasty, hearty meal, you can hardly beat the roasted lamb at Restaurant Mediterran in Kaiserslautern, Germany. Served with crispy potatoes and covered in a garlicky sauce, it comes in at a mere 13 euros ($15). Andrew Yurkovsky/Stars and Stripes () 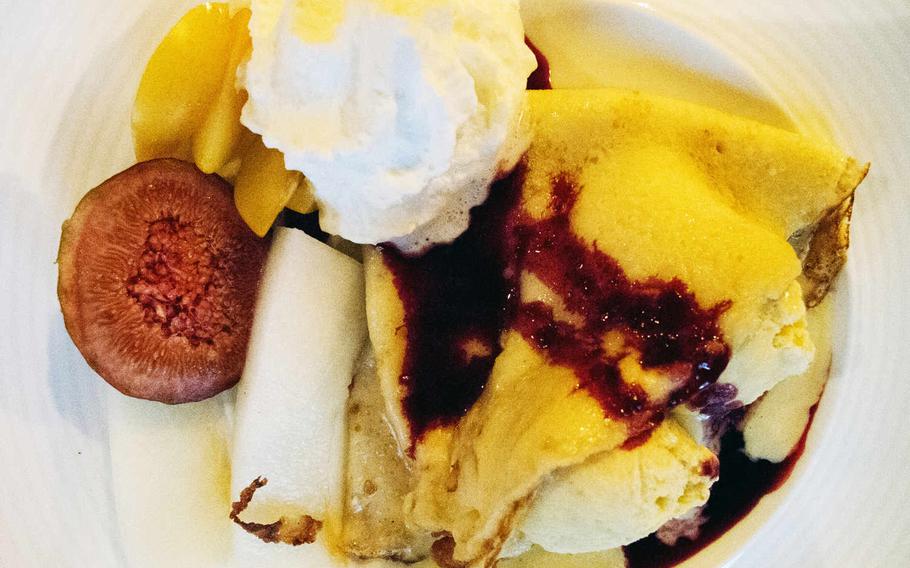 The day’s special at Mediterran included “Palatschinken” served with ice cream, whipped cream and fruits. Dessert is no afterthought at the restaurant in the center of Kaiserslautern, Germany. Andrew Yurkovsky/Stars and Stripes () The dining room at Mediterran, a restaurant in Kaiserslautern, Germany, offers a cool place to spend a late summer evening. Most guests on this hot day opted for the patio instead. Andrew Yurkovsky/Stars and Stripes ()

You can’t mistake Kaiserslautern, Germany’s Pariser Strasse for the Champs-Elysees – or any other Paris avenue. The section that runs from the shopping mall to Berliner Strasse is notable mainly for a string of old men’s bars, an empty Christian Science Reading Room and an array of shabby small shops.

Restaurant Mediterran, which offers a moderately priced menu of meats and seafood, is a standout in this culinary and commercial no-man’s land. Walk inside and you’ll be transported hundreds of miles away, to the bright colors and warm spirit of southern Europe.

After contemplating a visit for more than a year, I finally stopped in with a work colleague on a hot August evening. There’s outdoor seating, but we opted to stay inside when we discovered that the backyard patio was a tight fit.

Bold figurative paintings hang from the walls in the area where we ended up sitting, next to the front window. The other half of the dining room, where the bar is situated, has a more sophisticated vibe, like that of an artsy brasserie.

Mediterran’s menu is compact yet sufficiently diverse. Among the entrees, lamb and beef predominate. Other dishes include mussels, shrimp and pasta, and fried eggplant.

I chose the special, which on this day was pumpkin soup, cod fried in almond flakes, and a dessert of ice cream and Palatschinken, or pancakes.

Each of the dishes was a visual treat. The pumpkin soup resembled an abstract painting, with pumpkin oil forming swirls atop a deep ocher background. It tasted as good as it looked.

I anticipated equal satisfaction with the cod, which was accompanied by a sprig of red currants. The currants brightened the plate, adding a sweet and tangy accent to the fish, but the fish itself was disappointing. It was a bit too oily for my taste – always a risk with a fried dish.

My colleague was happier with his order of roasted lamb. Served in a light, garlicky sauce with vegetables and mushrooms, it, too, was decorated with red currants. The accompanying roasted potatoes were crispy and tasty.

We ended up having the same Palatschinken for dessert. Covered in ice cream and chocolate syrup, they were served with a fresh sliced fig — a nice touch that’s indicative of the restaurant’s attention to detail.

I expect to return to Mediterran. It gets so many things right that it would be unfair to judge it harshly for my unspectacular cod. And from now on I’ll think of Pariser Strasse as more than a place for dive-bar slumming.

Restaurant MediterranLocation: Pariser Strasse 41, 67655 Kaisersalutern, Germany. There is ample parking at a lot across the street.

Menu: Mainly in English. Practically every type of meat – turkey, beef, pork and lamb - is represented. Besides the cod special, seafood includes shrimp and mussels. Some dishes recognize the Balkan heritage of the owners: pljeskavica (chopped beef filled with cheese and onions) and a rump steak dubbed Lustiger Bosnjak, or the Happy Bosniak.