Report: Pilots at fault in Osprey crash that killed 2 Marines in May 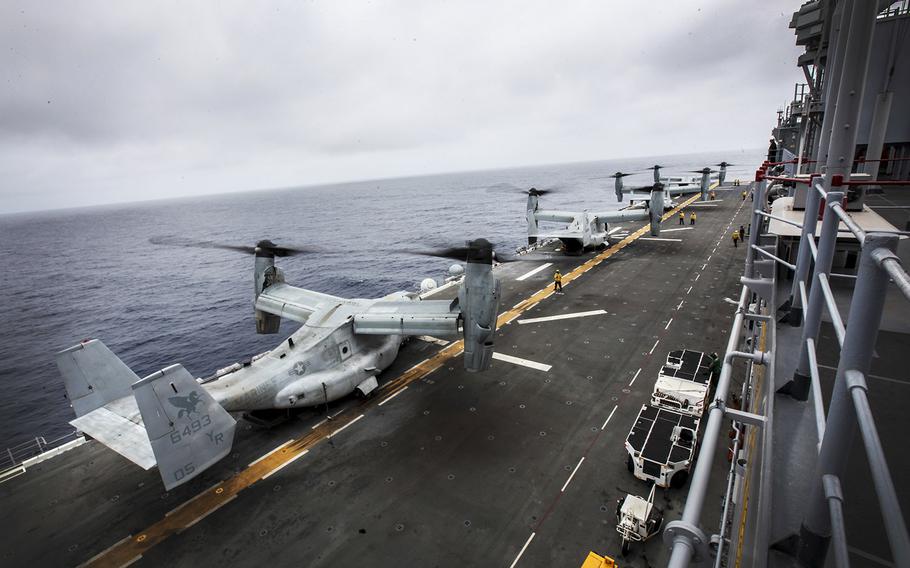 FORT SHAFTER, Hawaii — An investigation has determined an Osprey crash that killed two Marines in May at Marine Corps Training Area Bellows on Oahu was mainly due to pilot performance and an improper site survey of the terrain.

The probe concluded the crash “did not occur due to any misconduct or negligence of duties or training on the part of the air crew,” according to a Marine Corps news release issued Monday.

The investigation’s recommendations include “the potential for disciplinary and administrative actions,” the release stated.

The recommendations have been forwarded to the commander of the I Marine Expeditionary Force at Camp Pendleton, Calif., who will decide whether further actions will be taken, said Chuck Little, a spokesman for U.S. Marine Corps Forces, Pacific. Details about the recommendations and the personnel affected are not being released at this time, he said.

Marines Lance Cpl. Matthew J. Determan and Lance Cpl. Joshua E. Barron died in the May 17 crash, and many other Marines were hospitalized.

The Osprey, from the Camp Pendleton-based 15th Marine Expeditionary Unit, had been flying from the USS Essex to deliver Marines for training on land.

The 15th MEU was in Hawaii to conduct sustainment training exercises before being deployed to other areas of the Pacific.

Ospreys are equipped with tiltrotors, allowing them to land and take off vertically as helicopters do, then fly like a fixed-wing aircraft. They have been used in Afghanistan and Iraq.

The investigation found the pilots did not violate regulations or flight standards but did make wrong decisions, the Marines said.

The pilots attempted to set down on Landing Zone Gull, but visibility of the terrain was poor because of dust churned by the aircraft.

“The investigation indicated that a proper risk assessment should have prompted the pilots to choose an alternate flight profile, path or landing site that would have minimized or avoided the severe brownout conditions,” the release said.

Sustained flight time in brownout conditions due to dust and sand in the air while attempting to land caused the Osprey’s left engine to stall, and it fell to the ground with the loss of power, the release said.

The power of the engines decreased each time the Osprey entered a low-altitude hover of the landing zone, the release said, but did not say how many landing attempts were made.

With each attempt, the sand and dust caused a buildup of material on the blades and vanes of the compressor on the engine turbines. The blades spin to compress air as it passes into the combustion section of the engine, while the stationary vanes guide the flow of that air.

The buildup caused the compressor to stall on the left engine.

As a direct result of the crash, the Naval Air Training and Operating Procedures Standardization program now recommends decreased exposure times for the aircraft in brownout conditions.