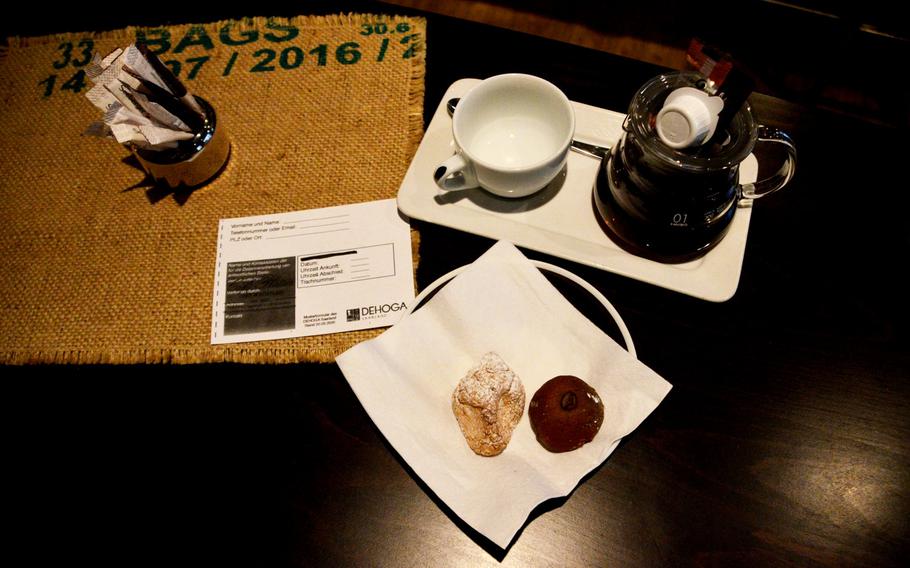 Buy Photo
A pot of Peru Tunki drip coffee served with individual pots of cream and a small cookie, almond and mocha Italian pastries, a pot of sugar and a paper to fill in with contact tracing information for the coronavirus sit on a table at Cafe Plaisir in Saarlouis, Germany, on Oct. 17, 2020. (Karin Zeitvogel/Stars and Stripes)

Buy Photo
A pot of Peru Tunki drip coffee served with individual pots of cream and a small cookie, almond and mocha Italian pastries, a pot of sugar and a paper to fill in with contact tracing information for the coronavirus sit on a table at Cafe Plaisir in Saarlouis, Germany, on Oct. 17, 2020. (Karin Zeitvogel/Stars and Stripes) 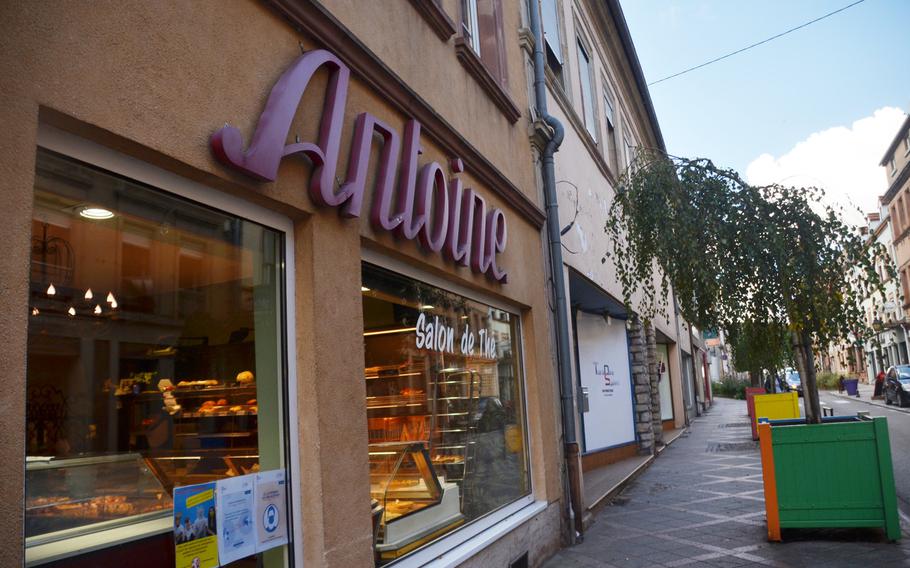 Buy Photo
Patisserie Antoine in Bitche, France, sells an array of pastries and cakes, and warm or cold beverages. Everything can be eaten in the cafe, where tables are spaced far apart to prevent the spread of the coronavirus, or ordered to go. (Karin Zeitvogel/Stars and Stripes) 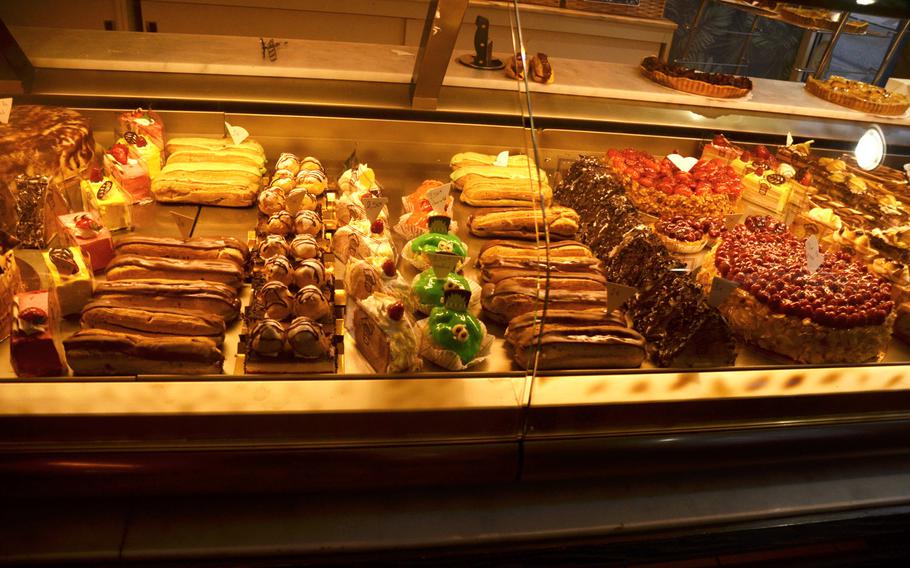 Buy Photo
An array of pastries and cakes, including chocolate eclairs and fruit tarts, feature in the display case at Patisserie Antoine in Bitche, France, on Oct. 10, 2020. Pastries can be eaten at the cafe or taken home. (Karin Zeitvogel/Stars and Stripes) 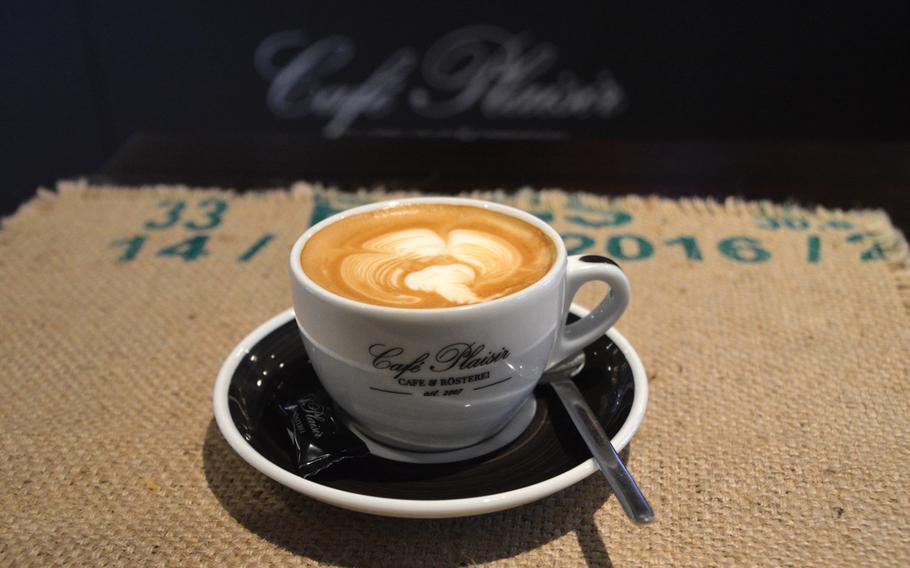 Buy Photo
A cappuccino at Cafe Plaisir in Saarlouis, Germany features what looks like an elephant's head on Oct. 17, 2020. The cappuccino was served with a chocolate-covered espresso bean. (Karin Zeitvogel/Stars and Stripes) 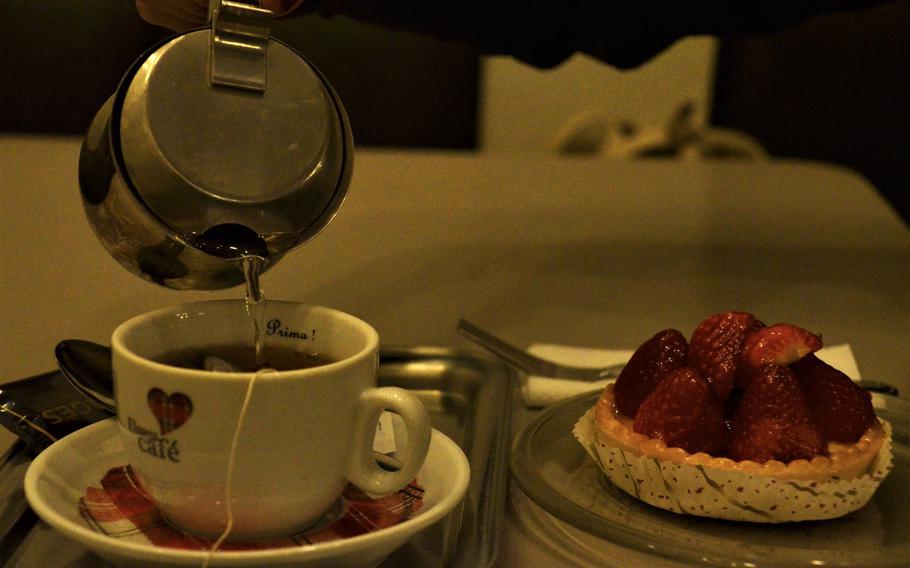 Buy Photo
A strawberry tart and a pot of fruit tea at Patisserie Antoine in Bitche, France, on Oct. 10, 2020. The tart consisted of a pastry bed topped with confectioner's custard and crowned with fresh strawberries. (Karin Zeitvogel/Stars and Stripes) 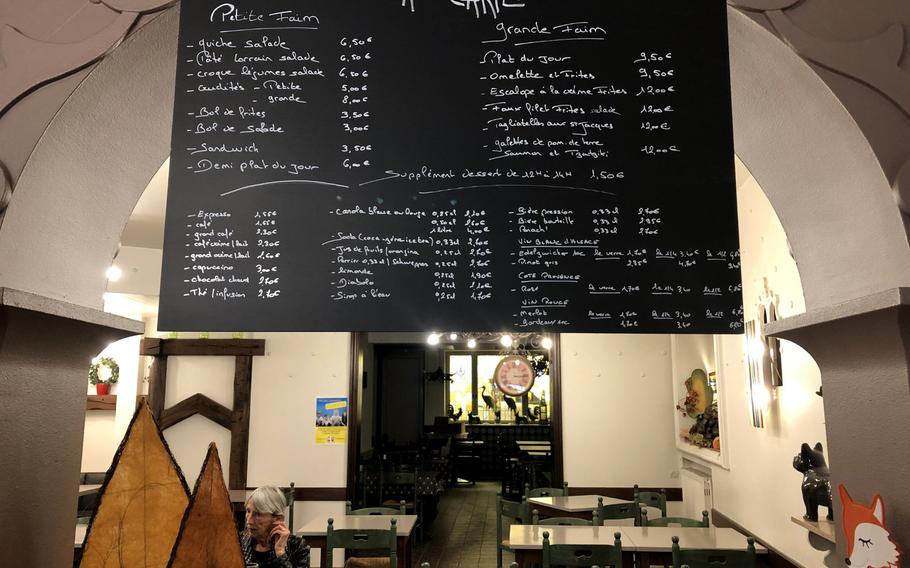 Buy Photo
A woman sits near the menu in Patisserie Antoine in Bitche, France, on Oct. 10, 2020. In addition to small and large dishes such as quiche with salade and tagliatelle with scallops, the cafe offers an array of pastries and beverages, including tea and coffee. (Karin Zeitvogel/Stars and Stripes) 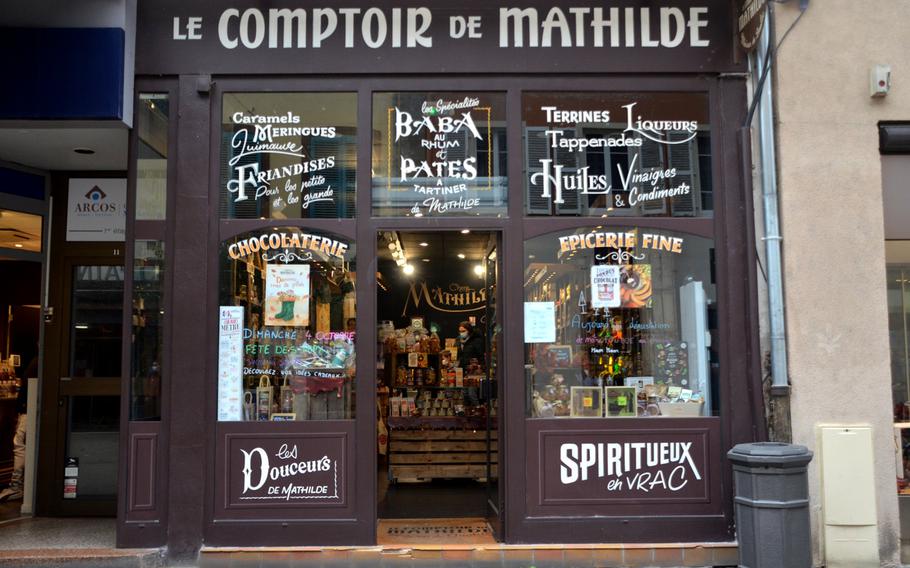 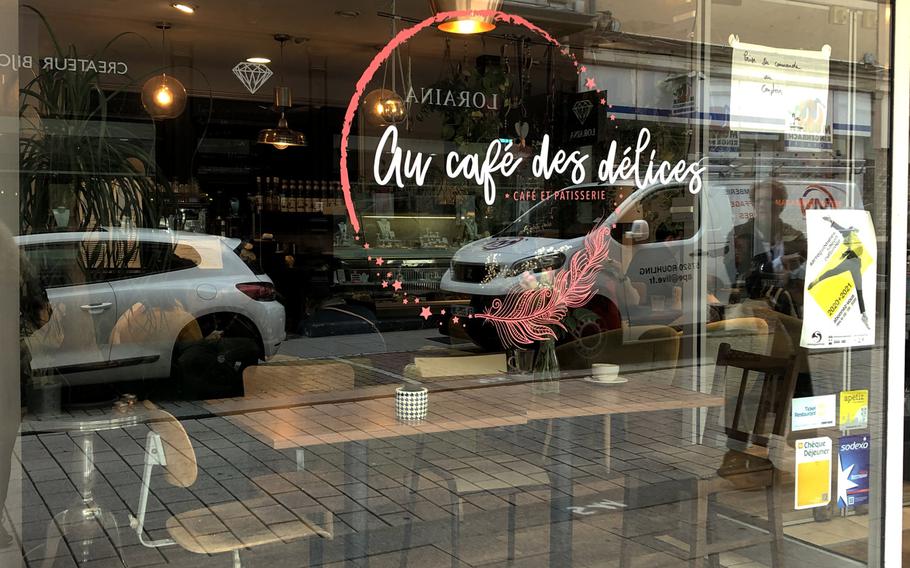 Buy Photo
Au Cafe des Delices in Sarreguemines, France, on Oct. 3, 2020. The cafe specializes in North African pastries, including baklava and makrout, a small cake made with semolina and filled with date paste. (Karin Zeitvogel/Stars and Stripes) 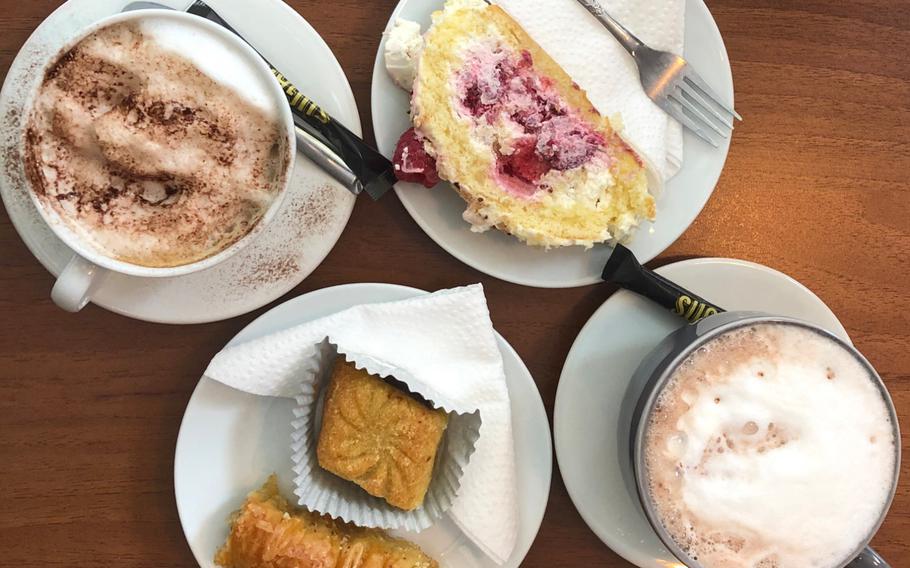 Buy Photo
From left to right: a cappuccino, North African pastries, a raspberry sponge cake and a hot chocolate wait to be tucked into at Au Cafe des Delices in Sarreguemines, France, on Oct. 3, 2020. (Karin Zeitvogel/Stars and Stripes) 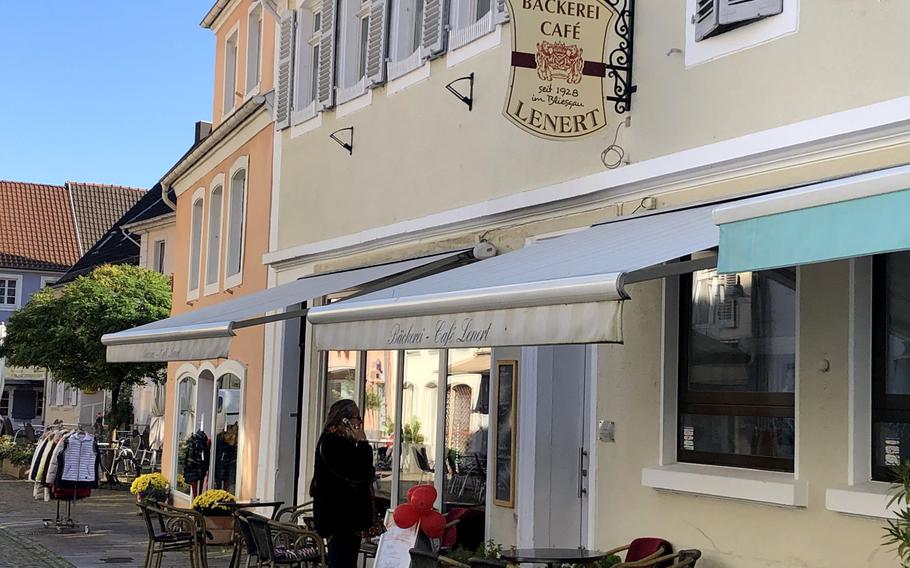 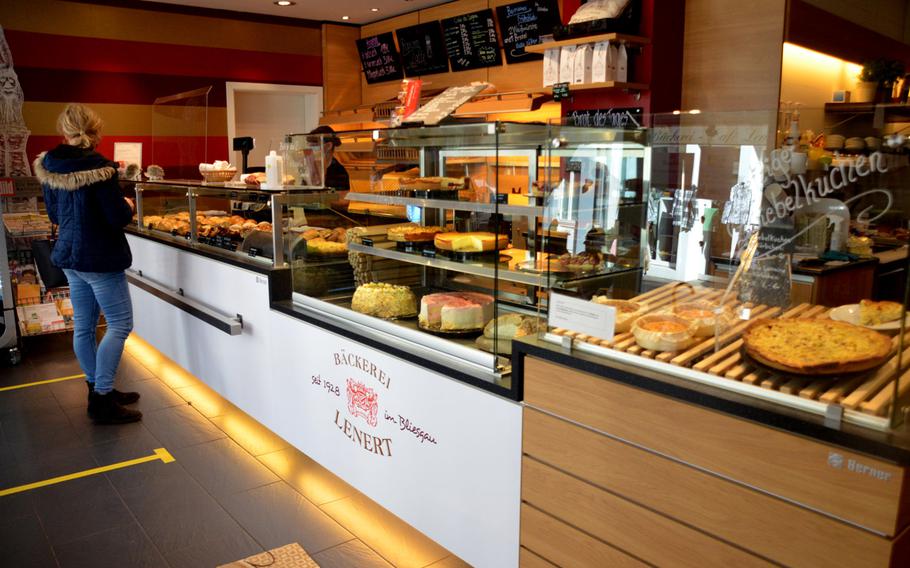 Buy Photo
A customer places a take-out order at Cafe Lenert in Blieskastel, Germany, on Oct. 10, 2020. The cafe, which has been in business since the late 1920s, uses locally sourced ingredients to make its savory and sweet baked goods and sandwiches. (Karin Zeitvogel/Stars and Stripes) 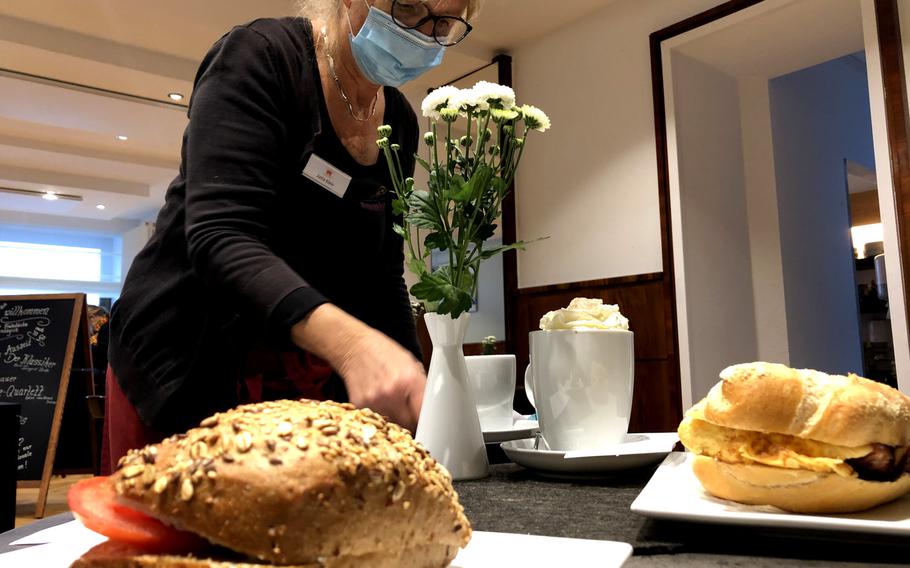 Buy Photo
Server Jutta Klein delivers a Weisser Hoefling sandwich (left), an Ei Love You (right), described by the customer as "a fancy Egg McMuffin," a hot chocolate with a dollop of whipped cream and a coffee at Cafe Lenert in Blieskastel, Germany, on Oct. 10, 2020. (Karin Zeitvogel/Stars and Stripes) 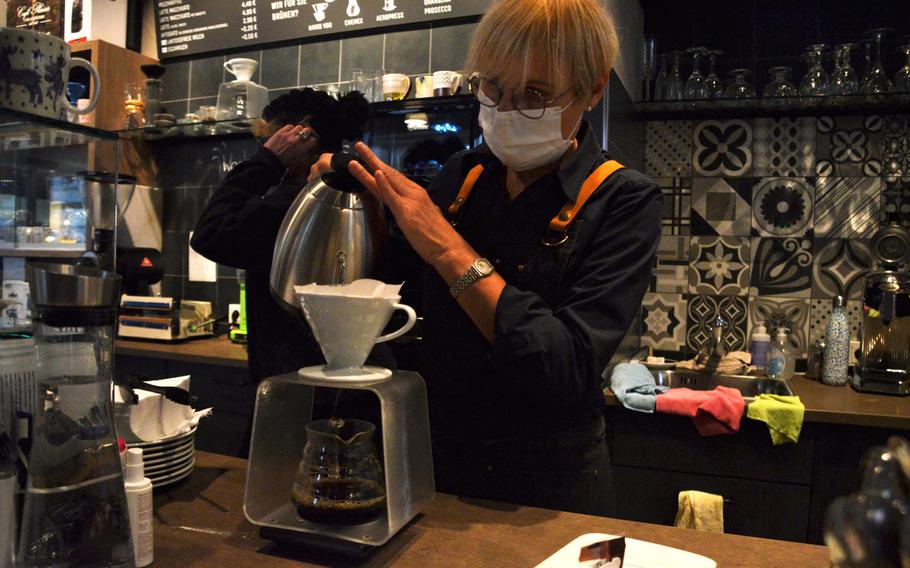 Buy Photo
A barista pours hot water onto Peru Tunki coffee at Cafe Plaisir in Saarlouis, Germany, on Oct. 17, 2020. The cafe roasts its own coffee, sourcing beans from farms around the world. (Karin Zeitvogel/Stars and Stripes) 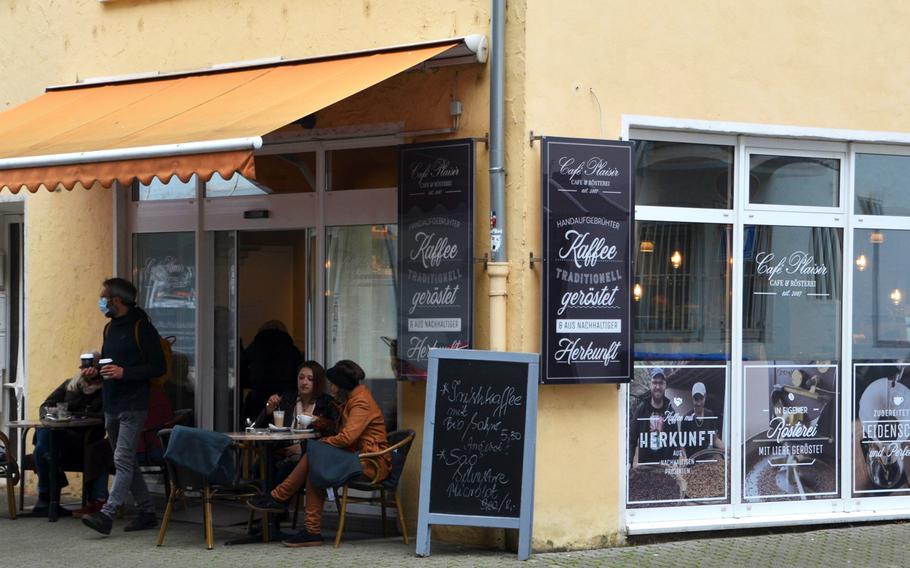 Buy Photo
A customer wearing a face mask leaves Cafe Plaisir in Saarlouis, Germany, with two beverages, while other customers enjoy their beverages outside and inside the cafe, on the edge of the city's pedestrian zone. (Karin Zeitvogel/Stars and Stripes) 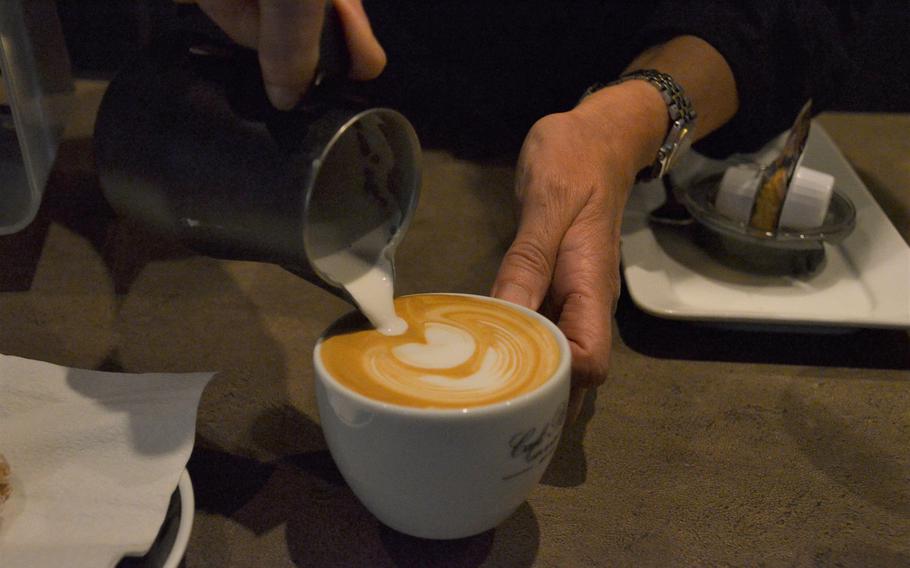 Buy Photo
A barista at Cafe Plaisir in Saarlouis, Germany, pours steamed milk onto espresso coffee to make a cappuccino on Oct. 17, 2020. Cafe Plaisir sources coffee beans from farms around the world and roasts its own coffee. (Karin Zeitvogel/Stars and Stripes)

When someone on Facebook asked for recommendations for a cafe where there were things to do nearby besides eating and drinking, nearly all the answers were for places in Kaiserslautern. So I got a compass, drew a circle with Ramstein Air Base as its center, and after consulting the Robert Koch Institute’s dashboard to try to avoid red coronavirus areas, set out with a friend to test cafes off the beaten path.

Here are the results.

Cafe Lenert Blieskastel, Germany The breakfast menu is available all day, but we ordered sandwiches. My guest chose the Ei Love You sandwich, which she described as “a fancy Egg McMuffin.” I had the Weisser Hoefling sandwich, made with a locally produced “Camembert-style” white cheese, slices of tomatoes and cucumbers, in a dark roll with pumpkin, sesame and other seeds.

I washed down my sandwich with a coffee from Cafe da Lagoa, one of the oldest coffee growers in Brazil, the cafe says. My friend had a hot chocolate topped with a very large dollop of whipped cream.

Two of us lunched for just under 14 euros. I was glad I didn’t give up when they were closed for renovations the first time I went. Tables are far enough apart to allow social distancing, and since reopening on Oct. 10, the cafe locally sources most of the ingredients in the food it serves. Customers are asked to fill in a form for contact tracing.

Parking: Turn right at the roundabout at the entrance to the town and there’s a large, free parking lot. The cafe is a five-minute walk away.

Other things to do: Bring your bike. The Glan-Blies bike path passes right behind the parking lot. In one direction, it takes you back to Ramstein and in the other to Sarreguemines, France. There’s also a Roman settlement nearby with an open-air museum.

Au Cafe des Delices Sarreguemines, France Sarreguemines is in France’s Grand Est region, which was the only part of France that wasn’t considered a high-risk area for the coronavirus when we went in early October. That has changed — RKI now considers all of mainland France high-risk. The border is still open, though, and most people in Sarreguemines wore masks, indoors and outdoors, when we were there.

Run by two Algerian women, the cafe features North African specialities like makrout — cakes made with semolina and filled with date paste — or baklava. The day we were there, the sisters also made sponge cakes with creamy fillings including malt balls or fresh fruit.

We had a selection of North African cakes, a slice of raspberry sponge cake, and a cappuccino and a hot chocolate to drink. We should have tried the mint tea — it’s a specialty of North Africa.

The cakes were just the right amount of sweet. The cappuccino could have used a little more frothy milk.

The cafe was very busy. Orders are placed at the counter and brought to your table. Customers wore face masks when walking around but removed them while seated. Staff wore them all the time. Social distancing rules were enforced. No contact tracing information was collected, but we paid by credit card, which might allow them to find us if they need to.

Parking: A spot across the street cost 60 euro cents for an hour. The ticket machine took a U.S. credit card.

Other things to do: Turn right when you leave the cafe, and there are numerous specialty food and other shops in a pedestrian area. Cora is about a mile away. Sarreguemines also has a ceramics museum, and if you have your bike with you, you could ride the French part of the Glan-Blies bike path.

Patisserie Antoine Bitche, France Only the French know how to make fruit tarts like the ones we had in this cafe in the small but historic town of Bitche: Take a pastry bed, top it with confectioner’s custard and crown with a circle of fresh fruit.

Orders are placed at the display case at the entrance and then brought to your table. You pay as you leave, which meant we bought a couple more pastries to go.

The atmosphere was a little like what you might imagine rural France to have been like in bygone times. An old woman read the newspaper as her friends streamed in and out to talk to her, and a young couple chatted over croissants and espressos.

There’s plenty of room in the cafe to stay well away from the next person, but no contract tracing information was taken. Bitche is also in the Grand Est region, which the German public health agency, RKI, raised to the highest health alert on Oct. 15.

Address: 3 Rue de Sarreguemines, 57230 Bitche, France. Under an hour from Ramstein and Kaiserslautern, just over an hour from Baumholder. Open every day except Monday from 7:30 a.m. to 6:30 p.m.

Parking: We found a spot up the street from the cafe and parked there for free.

Other things to do: Take a self-guided tour of the Citadel, which you’ll see perched atop a hill in the center of town as you enter Bitche. A small indoor exhibit at the Porte de Strasbourg includes a tribute to the 100th Infantry Division, which liberated the town in 1945.

Cafe Plaisir Saarlouis, Germany This was the cherry on the cake of my hunt for a good cuppa. It was the best cup of coffee I’ve had since 1991 when the Burundian agriculture minister gave me a bag of coffee beans after we’d sat together on a long flight. That East African coffee was for decades the standard by which I measured other coffee. Nothing came close — until I went to Cafe Plaisir.

The aptly named cafe — it means “cafe pleasure” — is in downtown Saarlouis at the edge of a pedestrian shopping district. They roast their own coffees, sourcing the beans directly from farms around the world.

There is a small selection of croissants and Italian pastries available to nibble on, but the focus is on coffee. I had an almond and a mocha pastry with my Peru Tunki drip coffee. The barista also gave me a cappuccino to try. Both coffees made me sink into my seat and revel in the experience. It was coffee heaven. The pastries were good, too.

The tables in the cafe were all spaced roughly six feet apart, as were those outside. The servers wore masks all the time and frequently washed their hands. You can buy bags of coffee and the Italian pastries at the cafe or online.

Parking: There is a multi-story parking lot nearby. It cost 1.80 euros because I overran my first hour.

Other things to do: You could visit the city. It was founded by Louis XIV, France’s Sun King who had Versailles built. He liked Saarlouis so much, he named it after himself. There’s a LeClerc hypermarket just over the border in Creutzwald, France. But really, the coffee alone justifies the trip.

Of all the cafes I tried, Cafe Plaisir is the closest to Spangdahlem — about 75 minutes away. It’s about 45 minutes from Ramstein and an hour from Baumholder and Kaiserslautern.