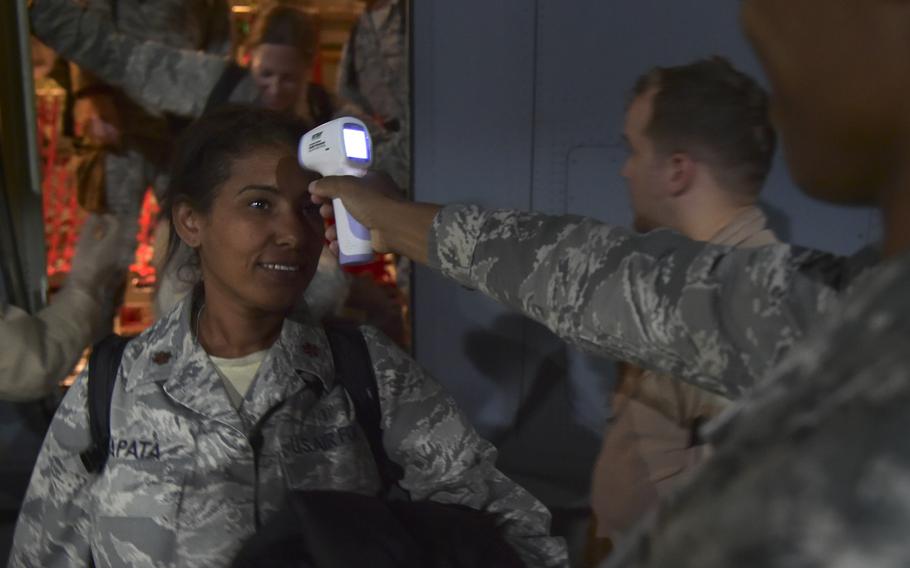 RAMSTEIN AIR BASE, Germany — Ramstein officials are implementing extra precautions for personnel returning from Ebola-afflicted regions in West Africa, procedures that in some situations are more stringent than those required by the Defense Department or recommended by the Centers for Disease Control and Prevention.

Steps include directing Ramstein personnel involved with Operation Unified Assistance to have their temperature checked twice daily at the base medical clinic for 21 days, even if they’ve had no known exposure to the Ebola virus, 86th Airlift Wing officials said at a town hall meeting Monday.

Temperatures of personnel returning to Germany are initially taken plane side, before anyone leaves the flight line, and then again at a separate screening location. Passengers traveling further must also be cleared for flight.

Some restrictions on movement also could be placed on military members with a “low risk” of exposure to Ebola, even if they are asymptomatic. But any “quarantine” would need to be determined on a case-by-case, by-risk basis, according to Col. Brian Agee, the wing’s public health emergency officer.

“Quarantine of a healthy person is not to be taken lightly,” he said.

The rules Ramstein has put in place differ from the approaches being taken in New York and New Jersey, which have come under scrutiny for their handling of Ebola-related cases in recent weeks.

Late last week, New Jersey Gov. Chris Christie and New York Gov. Andrew Cuomo announced their states would require a 21-day hospital quarantine of health care workers who had spent time in Africa caring for Ebola patients. On Monday, however, both states announced that they would ease those restrictions and allow medical professionals who had contact with Ebola patients to be quarantined at home instead.

Because airmen from Ramstein have been delivering aid and medical supplies to African nations battling the disease, the wing scheduled four town hall meetings to discuss protocols established to reduce inadvertently exposing the local military and host-nation community. Officials are urging the base populace to be informed about the disease, which has so far killed nearly 5,000 people, mostly in West Africa, according to the latest CDC figures.

Agee said it’s important to “have a healthy respect for this enemy, but not blind fear.”

Airmen assigned to the wing are providing logistical support to the U.S.-led effort to eradicate Ebola in West Africa, mainly by airlifting supplies to the region. Other personnel involved in Operation United Assistance, including military members not assigned to Ramstein, DOD civilians and other federal government workers, may also transit through Ramstein on military aircraft en route to other destinations.

As of Friday, less than 50 people have come through Ramstein from the region, base officials said.

So far, no one considered at “low risk” of exposure to Ebola has traveled to Ramstein, Agee said. That category covers anyone who had close, household-type contact with an Ebola patient or someone who cared for an Ebola patient while not wearing the recommended protective gear.

Military members with a “low risk” of exposure to Ebola, could be restricted to base or told to avoid any large public gatherings, for instance, said Agee. Those determinations would be decided on a case-by-case basis, he said.

Agee said confirmed cases, suspected cases and “high risk” exposures would not be flown back to Germany.

Whether someone presenting with symptoms after returning to Germany was sick from Ebola could be determined quickly, Agee said. The only definitive test for the virus is a blood test. Landstuhl Regional Medical Center can get test results within four to six hours, Agee said.

If the results were positive, the decision on where to hospitalize would be the call of a local German doctor, Christiane Steinebrei, the public health commissioner for the county of Kaiserslautern, even if the patient was in the military. Agee noted that the hospital in Frankfurt has four beds to treat Ebola patients; as well, there are three other facilities throughout Germany equipped to provide that level of care, he said.

Air crews in transit back and forth between Germany and West Africa are instructed to self-monitor and report their status twice per week until their mission is complete, officials noted.