Buy Photo
A close up of the gaeng phed gai at Thai Thai Orchidee, a restaurant in Ramstein-Miesenbach, Germany. The chicken and vegetable dish in a sauce of red curry and coconut milk is served over white rice. (Jennifer H. Svan/Stars and Stripes)

Buy Photo
A close up of the gaeng phed gai at Thai Thai Orchidee, a restaurant in Ramstein-Miesenbach, Germany. The chicken and vegetable dish in a sauce of red curry and coconut milk is served over white rice. (Jennifer H. Svan/Stars and Stripes) 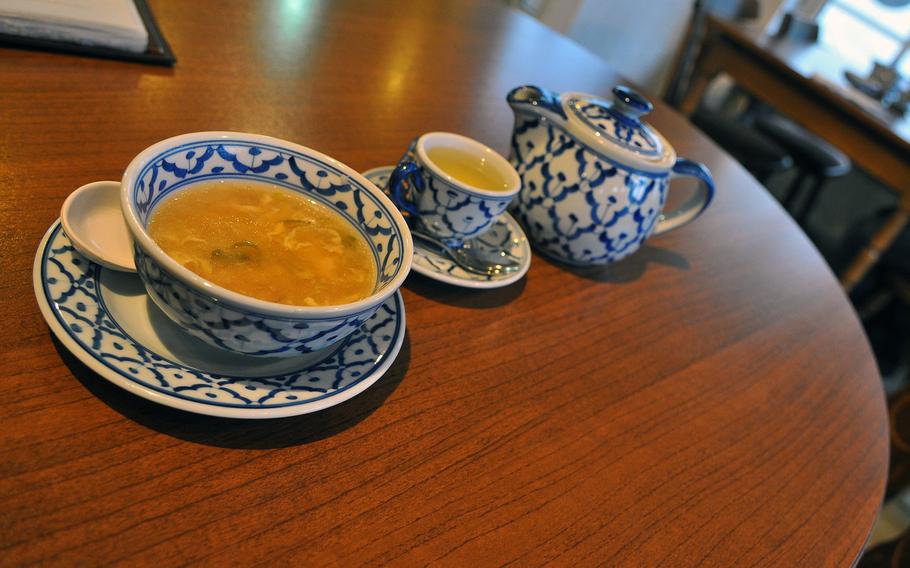 Buy Photo
A bowl of soup with egg and rice and hot Jasmine tea preceded the main dish on a recent lunch outing to Thai Thai Orchidee, a small Thai restaurant in Ramstein-Miesenbach, Germany. (Jennifer H. Svan/Stars and Stripes) Buy Photo
Inside the Thai Thai Orchidee. The food at the small Thai restaurant in Ramstein-Miesenbach, Germany, comes to the table in two covered dishes: one for rice, the other for the main dish. The latter, for this meal, was the gaeng phed gai, chicken and vegetables in a red curry, coconut milk sauce. (Jennifer H. Svan/Stars and Stripes) Praising the Thai Thai Orchidee restaurant as the “best Thai in Ramstein” might not be a ringing endorsement — it’s nearly akin to calling your only child your favorite child.

A quick online search shows two Thai restaurants in the small village a short drive from the U.S. military’s Ramstein Air Base. And both — Thai Thai Orchidee and Thai Thai Two — have the same owners.

When it comes to Thai food in these parts, there’s not much choice.

I’m not much of a Thai food expert. I probably would give high marks to chopped schnitzel disguised as chicken in a sauce of curry and coconut milk as long as it tasted good.

Wanting to avoid the busy weekday lunch crowd I had read about, I arrived at Thai Thai Orchidee after 1 p.m. A few customers lingered, but there were several empty tables.

The restaurant is small, though not particularly cozy. The orchids by my table looked real — until I touched them. But the place is clean and big windows provide enough natural light even on a dreary, rainy day.

The extensive menu might have been overwhelming if not for two things: A colleague suggested anything with red curry and coconut milk, and I had only 10 euros in my wallet. English descriptions of each dish were a plus.

I ordered gaeng phed gai, chicken in a red curry, coconut milk sauce with vegetables. Spicy dishes are identified on the menu with one or two red chili peppers. On the lunch menu, gaeng phed gai had one pepper.

I would give it one piece of a finely diced chili pepper. It had a tiny kick, but there was no sweat pouring from glands, no tingling tongue, no need to even drink a cooling beverage.

Next time, I’ll opt for some authentic Thai flavoring.

The food, nevertheless, was very good. The sauce was tangy and the vegetables tasted fresh, a nice mix of three kinds of bell pepper, cucumber, thin and surprisingly tender bamboo strips, and basil. The portions — it came with white rice — were just right.

Lunch came with a hot soup containing egg and rice. Even with some hot Jasmine tea, I stayed under budget. That was definitely a deal. But I’m looking forward to venturing beyond the lunch specials on another visit. For starters, there are nine soups to try and two pages of appetizers, including deep-fried shrimp and stir-fried chicken salad. The main dishes come with chicken, pork, beef, duck, seafood or just vegetables, with different sauces and a variety of curries, including green, yellow, red and massaman.

Service is businesslike: You place your order, you get your food. At 2 o’clock, when the restaurant closes for the afternoon, I was told it was time to go. No matter; I was done.

Prices: Weekday lunch specials, including soup and main dish, start at 6.50 euros ($7.10); meals from the regular menu start at 7.50 euros for vegetarian and about 9 euros and up for meat dishes.