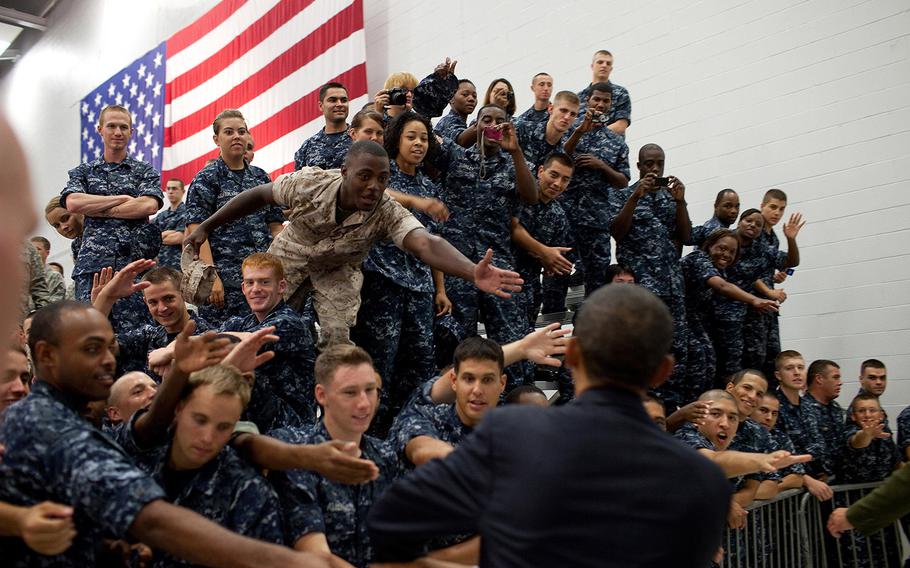 President Barack Obama greets members of the audience following his remarks at an event with military personnel at the Pensacola Naval Air Station in Pensacola, Fla., June 15, 2010. This was the President's fourth trip to the Gulf Coast to assess the ongoing response to the BP oil spill in the Gulf of Mexico. (The White House)

1. Mr. President, many military families wonder why there is debate about whether or not their sons and daughters are on a combat mission in Iraq. They are risking their lives to defend not only Iraq, but ultimately the United States and the Western way of life. The U.S. forces who have lost their lives in Iraq since 2014 died on the ground fighting the Islamic State. In your own words, could you please say why this deployment back to Iraq is not a combat mission?

In our fight against ISIL, three of our brave service members have made the ultimate sacrifice on the battlefield—Master Sergeant Joshua Wheeler, Staff Sergeant Louis Cardin and Chief Special Warfare Operator Charles Keating IV. These three men were killed in combat while they were supporting local forces in Iraq. They gave their lives to keep us safe, and our prayers are with their families who have endured a loss that few of us can imagine. This Memorial Day, I’ll have the opportunity to honor these three patriots and speak to the American people about their sacrifice.

As Commander in Chief, I’ve spoken as clearly as I can about our mission against ISIL—both what it is and what it is not. Our men and women in uniform and their families, who serve on our behalf and defend our way of life, deserve nothing less. Our mission in Iraq, first and foremost, is to support Iraqi forces as they take the lead in fighting ISIL on the ground. This includes our special operations forces in Iraq, and now Syria, who are training, equipping and advising local forces and partnering on counterterrorism missions against ISIL leaders and targets. It also includes our air campaign, which, along with coalition partners, has pounded ISIL targets and helped local forces in Iraq and Syria push ISIL back from key areas.

This is a dangerous mission, and our forces will sometimes face combat situations, as did Master Sergeant Wheeler, Staff Sergeant Cardin and Chief Special Warfare Operator Keating. Sending our forces into harm’s way is the most solemn decision I have to make as President. I do so knowing that some may be gravely injured or give their lives. Over the years, Michelle and I have spent countless hours at the bedsides of our wounded warriors. We’ve grieved with Gold Star families. I understand the consequences of war.

I do think it’s important to note that our fight against ISIL is very different in both scale and mission from the large ground wars we fought in Afghanistan and Iraq. I’ve approved the deployment of some 4,000 U.S. military personnel in Iraq and up to 300 in Syria to assist local forces and to support the air campaign. In contrast, at one point we had about 195,000 American troops in Afghanistan and Iraq, where they were responsible for security and engaged in combat on a regular basis as they patrolled cities and towns.

Today in Iraq and Syria, that larger mission—leading the fight against ISIL on the ground and taking and holding territory—is the responsibility of local forces. For example, when Ramadi was liberated from ISIL, it was Iraqi forces that fought and pushed them out. That’s because, as we learned during the Iraq War, gains will be fleeting unless they are won by local forces who can secure and stabilize their countries on the ground over the long-term. We’ll continue to train, equip and assist them. We’ll continue to support them with air strikes and partner with them in raids against ISIL leaders. American forces will continue to face risks, and we’ll make sure they have the support and equipment they need as they support local forces on the ground who are in the lead. And I am absolutely confident that if we remain focused and relentless, along with our coalition partners, we will succeed in our goal of destroying ISIL.

2. Mr. President, in your own words, who are we fighting when we send troops to combat the Islamic State? If this is not a war against radical Islamic terrorists, what is it?

As every military leader understands, you have to know your enemy. And our enemy, ISIL, is a network of barbaric terrorists. Moreover, it’s important that we never play into our enemy’s propaganda, which they use to radicalize and recruit people to their ranks. Groups like ISIL and al Qaeda are desperate for legitimacy. They want people to think that they are religious warriors defending Islam, but nothing could be further from the truth. They are thugs, thieves and murderers, and many of their victims are innocent Muslim men, women and children. And they’ve been rejected by the overwhelming majority of the world’s Muslims, including patriotic Muslim Americans who serve proudly in our armed forces.

So I will never give terrorists like ISIL and al Qaeda the legitimacy they crave. I will never play into their propaganda or help them recruit. And others shouldn’t either. When we start using loose language that lumps terrorists together with an entire faith, it helps the terrorists. It risks reinforcing their claim that America or the West is somehow at war with Islam, which is an ugly lie. And it risks pushing away the very people—Muslim American communities here at home and Muslim nations around the world—who are among our closest partners against terrorism and violent extremism. The language we use has consequences. And we have to be smart in our fight against terrorism—in both our deeds and words. Our security depends on it.

3. Mr. President, before you took office, in a 2008 speech on Iraq in Fayetteville, North Carolina, you pledged to end the war in Iraq, because its continued execution was not making the American people safer. Eight years later, the United States has approximately 4,250 ground troops in Iraq and Syria. We are conducting daily airstrikes, and drone attacks, and from time to time suffering casualties in a conflict which by some estimates could last for decades. Given the chance to make the same decision again, would you have pushed the Iraqis harder to enable some American forces to remain in Iraq after 2011?

As both a candidate and as President, I pledged to bring the war in Iraq that had been launched in 2003 to a responsible end. I believed then, and I continue to believe, that it was the right thing to do for our national security. As Iraqi forces took responsibility for their country’s security, we brought home nearly 150,000 American troops. I was willing to consider maintaining a small number of U.S. personnel in Iraq to help train and equip local forces—but only if the Iraqi government invited us and gave our forces appropriate legal protections.

The government of Iraq—then led by Prime Minister Maliki—did not do so, and as Commander in Chief I was not going to allow our men and women in uniform to serve in that situation. Prime Minister Maliki and his government then governed in an increasingly sectarian manner that exacerbated divisions within Iraq, provided an opening for ISIL and weakened Iraqi security forces. However, even as our coalition is making steady progress driving ISIL back, our mission today is still very different from the Iraq War.

4. Mr. President, if you could choose one area of national defense you could make another significant reform to before you left office, what would it be?

First, I want to point out that the critical investments we’ve made over the past eight years have kept our military strong and ready for the full spectrum of operations that our troops face. Our Navy fleet of ships and submarines is more lethal. Growing intelligence, surveillance and reconnaissance capabilities give our ground forces more situational awareness. Our fifth-generation fighters, which are unrivaled, and our long-range aircraft ensure that we can’t be denied access to critical regions around the world. We’ve bolstered special operations forces and cyber capabilities to make sure we’re meeting evolving threats.

Yes, we’ve drawn down the size of our armed forces—after two major ground wars, that’s natural and necessary. But thanks to investments made over many years, our armed forces—as our military leaders attest—remain the strongest fighting force the world has ever known. In addition, with the repeal of Don’t Ask, Don’t Tell and by opening all combat positions to women, our military is drawing on the talents and skills of more Americans, which makes our armed forces even stronger.

Even with this progress, we still need significant reform when it comes to how we spend our defense dollars. In recent years, we’ve made some headway. But as Secretary Carter, Chairman Dunford and others have said, we still have more to do. Some of today’s ships and aircraft are older than some of the parents of the personnel operating them. So we need to make our warfighters a priority and continue to modernize aging equipment. To do that, we need Congress to help us cut excess capacity in our force structure, bases and weapons systems. We have to more properly align the military’s size and shape with the needs of the force—to make sure our troops have the training and equipment required for the missions we ask of them. Secretary Carter has been leading the effort with Congress to ensure that the Defense Department is investing every dollar where it will have the greatest impact, and these reforms have to continue.

5. Last, how would you like the men and women who serve you as Commander-in-Chief to remember you?

Of all the privileges of serving as President, the highest honor is serving as Commander in Chief of the greatest military in history. When less than one percent of Americans wear the uniform, a lot of people in our country don’t always get to see, or fully appreciate, the immense sacrifices that our military men and women and their families make on our behalf. But, as Commander in Chief, I’m fortunate to see it every day. I’m in awe of their commitment to country and their readiness to give everything—their very lives—for the nation that we all love.

After I leave office, I hope that our troops and veterans can look back and feel that I tried to do right by them and their families. That I ended two large ground wars responsibly and brought troops home to their families even as we continue to have military personnel serving in dangerous missions, including in Iraq, Syria and Afghanistan. That I deployed them wisely, never rushed to war and only sent them into harm’s way when it was absolutely necessary for our security—and that, when I did, I gave them the clear mission and support they needed to succeed. That, when their comrades gave that last full measure of devotion, we always honored their memory, as we’re doing again this Memorial Day weekend. And that along with Vice President Biden—and Michelle and Dr. Biden’s work with Joining Forces—we made sure that the American people are doing more to truly honor and support our troops and veterans and their families.