Protester bites cop outside US military base on Okinawa 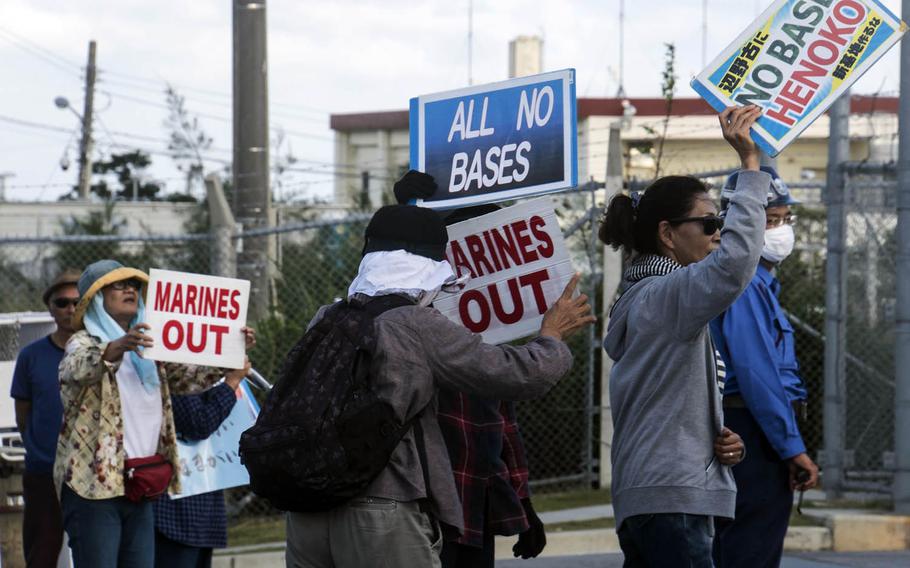 CAMP FOSTER, Okinawa — A woman was arrested Thursday after authorities said she bit a police officer outside a Marine Corps base on Okinawa – one of three arrests that day near U.S. military installations on the island.

Police declined to release information about the woman, who was charged with obstructing a police officer and causing bodily injury after her arrest at approximately 9:25 a.m. outside Camp Schwab.

The woman bit the officer after an attempt to stop her from running out to the highway near Schwab’s Gate 2, a spokesman for the prefectural police in Nago said. The bite left teeth marks on the officer’s arm and will require medical treatment, police said.

Protest groups told Stars and Stripes they did not know if the woman belonged to an organization associated with opposition to military bases on the island.

Entering U.S. military property without permission is a violation of the Act on Special Measures Concerning Criminal Cases under the bilateral security treaty.

The cases were sent to the Naha District Public Prosecutor’s Office on Friday afternoon, police said.

Protests over the U.S. military presence on Okinawa are a part of daily life outside U.S. military installations on the island, which is home to roughly 50,000 U.S. troops, Defense Department employees and their families.

The island, just a short distance from China and North Korea, is strategically valued by the Pentagon.

The U.S. military and its partners in Tokyo have attempted to reduce the burden on Okinawa by consolidating bases and devising plans to ship Marines to Guam and other places. However, many citizens remain opposed to a plan that would close one Marine air base but expand another elsewhere on the island.