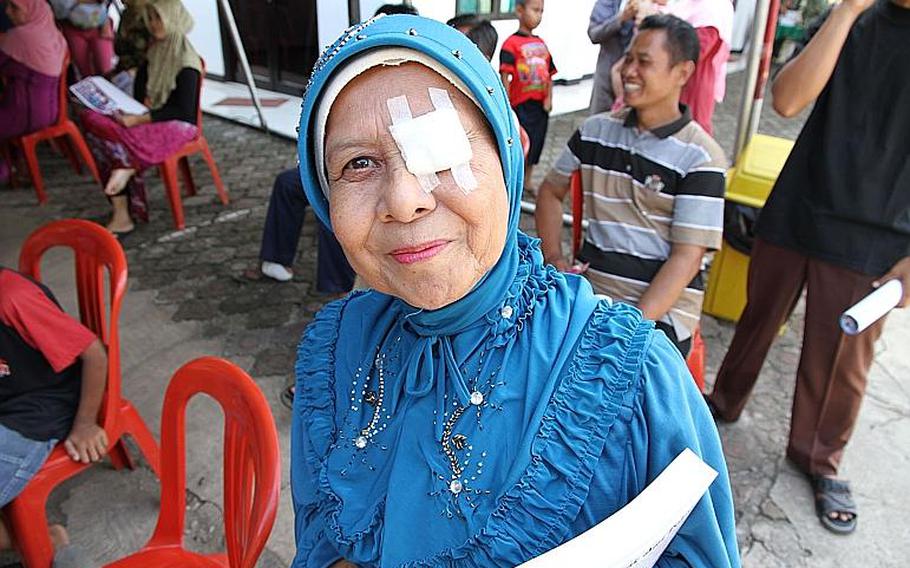 Buy Photo
An Indonesia woman leaves the free medical clinic held during the Garuda Shield exercise after being treated for an eye infection. (Wyatt Olson/Stars and Stripes)

CILODONG, Indonesia — Jillian Boesch and Ashley Zhou stood in front of two dozen small children who were frothing at the mouth during a free health clinic held as part of the recent Garuda Shield exercise.

The two ROTC nursing students had been instructing the Indonesian children on the proper method of brushing teeth, and the kids had taken to it with a foamy zest.

“Some of the kids you see here already have rotted-out teeth,” Boesch said after the brushing/flossing lesson was completed. “And they’re like 5, 6 years old.”

Establishing proper dental hygiene practices is one of the many health challenges for Indonesia, a country of almost 250 million people spread out over nearly 20,000 islands in Southeast Asia. Among the country’s most outstanding health concerns are tuberculosis, mother and infant mortality and emerging bird-borne diseases.

The United States views Indonesia as a budding and increasingly valuable partner in Southeast Asia; the two countries have found common ground in combating jihadist terrorism over the last decade.

Assisting Indonesia in its quest for greater national health is one way the U.S. works to promote security in this area of the Pacific, which is intersected by the Equator. American and Indonesian doctors saw about 300 patients at the free health clinic, most of whom live near the army camp, just south of Jakarta.

America is helping Indonesia handle some of its thorniest public health problems through the U.S. Agency for International Development.

“Maternal mortality in Indonesia is really out of kilter with where it really ought to be, given all sorts of other indicators in Indonesia,” said Irene Koek, USAID’s health office director in the country. “It’s actually among the highest in the Southeast Asia region.”

Indeed, it’s significantly higher than its closest neighbors. While Indonesia’s rate of women dying during pregnancy and childbirth was 220 per 100,000 live births in 2010, Malaysia’s rate was 29 and Thailand’s rate was 48 per 100,000 births, according to World Bank statistics.

Indonesia’s rate of infant deaths before the age 1 was 25 per 1,000 live births in 2011, two and three times higher than Thailand and Malaysia, respectively, according to the World Bank.

As in other developing Southeast Asian countries, more and more women in Indonesia are now giving birth in hospitals. About half of all deliveries are now at hospitals, a significant increase from about 40 percent just five years ago, Koek said.

That shift to hospital deliveries helped Malaysia achieve the lower rate of maternal death, which was halved between 1990 and 2010, according to World Health Organization data.

But the move toward deliveries at healthcare facilities hasn’t helped Indonesia decrease its mortality rates much, at least not as much as would be expected, Koek said.

“What we’re seeing is that the quality of care in a lot of the facilities is not quite ready to manage all these women who are coming in,” Koek said.

The facilities haven’t been equipped and personnel haven’t been trained to handle complications, or, in other cases, referrals are tardy or improperly assigned.

The west part of heavily populated Java Island, where Jakarta is located, has the highest mother/infant mortality rates in the country, according to United Nations data.

In partnership with Indonesia, USAID last year launched the Expanding Maternal and Neonatal Survival program, which offers technical assistance to hospitals and other facilities to establish “best practices” for deliveries and newborn care. The five-year program covers six of the country’s provinces that account for about half of all maternal and newborn deaths in the country, Koek said. Those provinces are in the islands of Java, Sumatra and Sulawesi.

The pressure to care for more patients more effectively is building because of a national universal-health care initiative that begins next year and is supposed to cover all Indonesians by 2019. Only about half of Indonesians are covered by health insurance now, according to data from the World Bank.

Dr. Leksmana, a captain in the Indonesian army who helped coordinate the free health clinic for Garuda Shield, said that the greatest need for patients like the ones he saw is cheap, effective pharmaceuticals.

“If you go to the hospital, you need big money,” he said.

One of the greatest health scourges in Indonesia, tuberculosis, requires months of antibiotic drugs, a treatment regimen that can cost as much as $1,000 in Indonesia, according to a 2009 study in the journal Health Policy.

Indonesia is among the top five countries suffering from the lung infection, with about a half-million new cases and 100,000 deaths each year.

USAID provides technical assistance to Indonesian pharmaceutical makers so they can produce antibiotics that are up to international standards for TB.

Koek said the agency has also been assisting the Indonesian government’s public-health TB program to bring it up to a functioning national scale.

Indonesia is considered a “hot spot” for animal-to-human transmitted diseases because so many people are encroaching on tropical forests, she said.

USAID and the Centers for Disease Control and Prevention works closely with Indonesia’s ministries of health and agriculture to monitor emerging diseases before they go global.

“It’s a high priority for both sides,” she said. “Not just for USAID, but also with the CDC and the Defense Department.”

For many Indonesians who need to see a doctor, the ailments are more mundane, but are detrimental to quality of life.

During a short break after seeing patients for almost four hours, Lt. Col. Kien Tran, a doctor with the Hawaii-based 1984th U.S. Army Reserve Hospital, said he’d seen many cases of low back pain and headaches, which he attributed to poor posture and overwork.

He prescribed medications to reduce pain in some cases but said it was temporary. “I think a change of lifestyle is most important,” he said.

Capt. Gloria Oxendale, a nurse practitioner with the 1984th, said that presentations at the clinic were intended to educate people about relatively simple changes they could make to remain healthier, such as hand washing and teeth brushing.

“I believe that what we can do is open their eyes to see how basic health skills can make a difference in their lives,” she said.