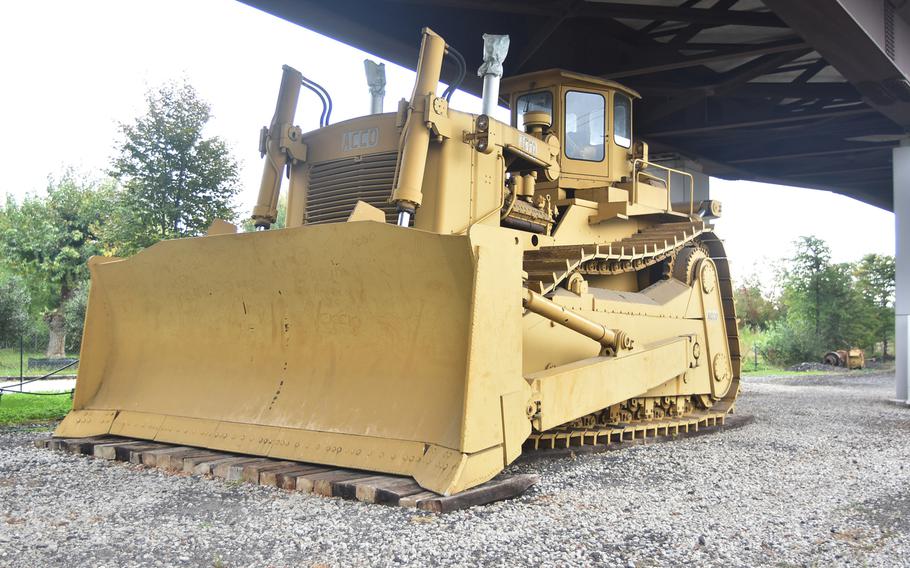 Buy Photo
The Acco bulldozer, reportedly the largest such vehicle ever produced, sits at an underpass on the grounds of the Bejaflor gardening business in Portogruaro, Italy. (Kent Harris/Stars and Stripes)

Buy Photo
The Acco bulldozer, reportedly the largest such vehicle ever produced, sits at an underpass on the grounds of the Bejaflor gardening business in Portogruaro, Italy. (Kent Harris/Stars and Stripes) 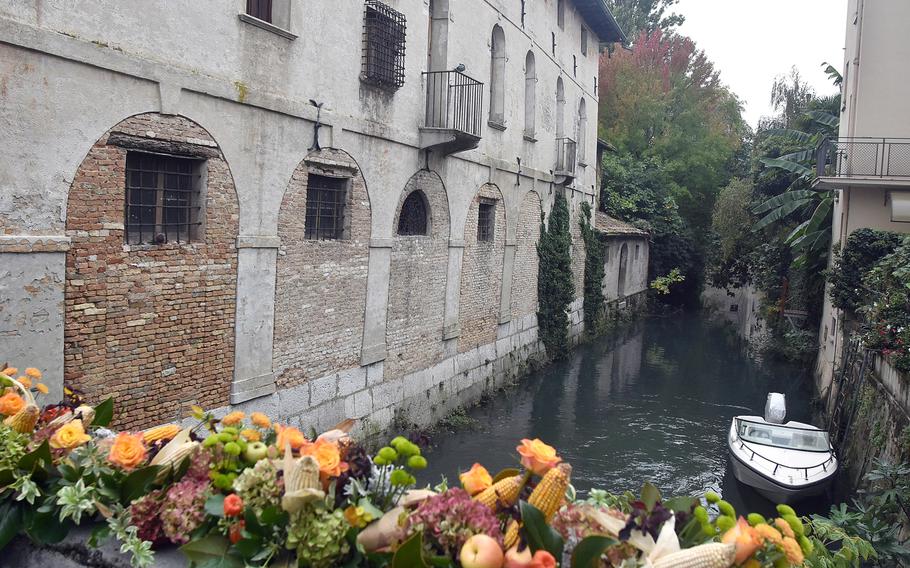 Buy Photo
One of several parts of the Lemene river winds its way through downtown Portogruaro, Italy, under a bridge festooned in fall colors. (Kent Harris/Stars and Stripes) 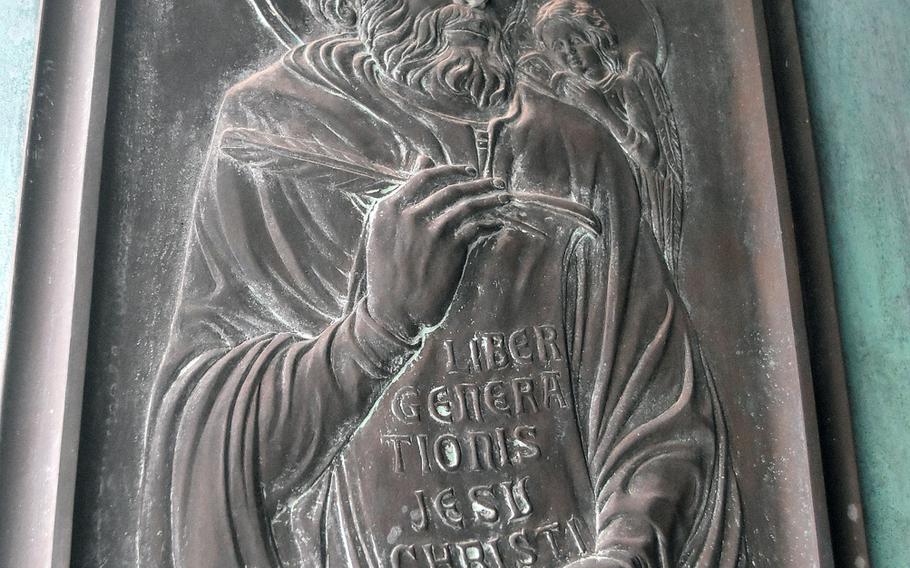 Buy Photo
This plaque decorates a door of the Chiesa di San Giovanni in Portogruaro, Italy. The church is located on one of the pedestrian areas in the historic city center. (Kent Harris/Stars and Stripes) 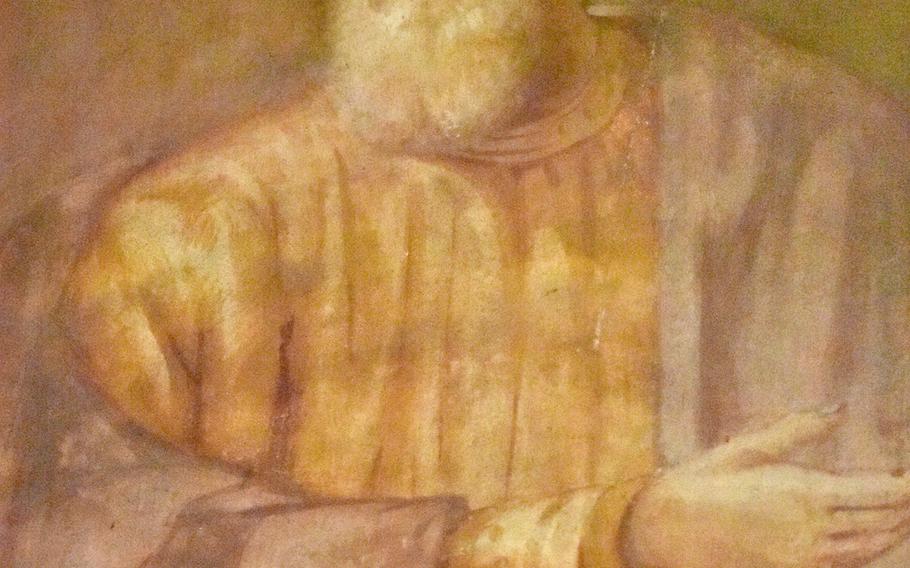 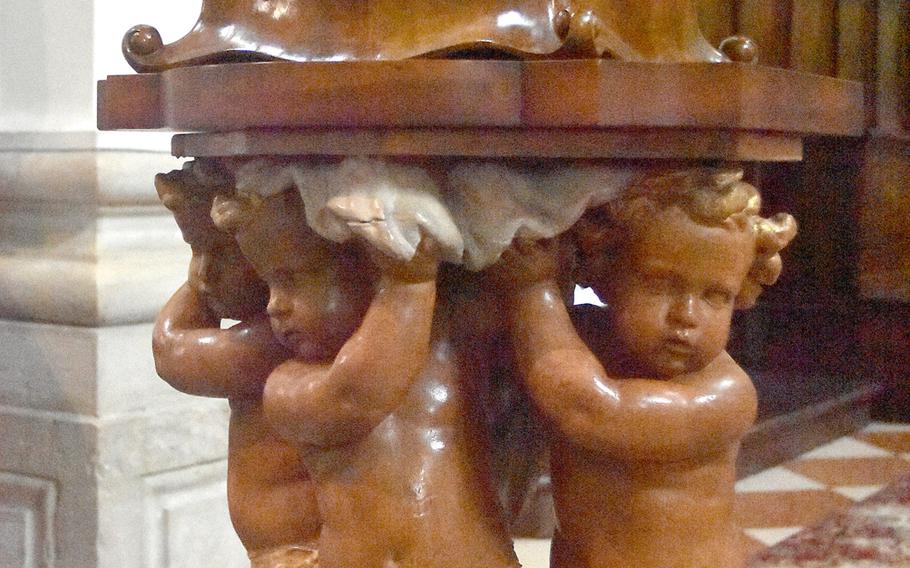 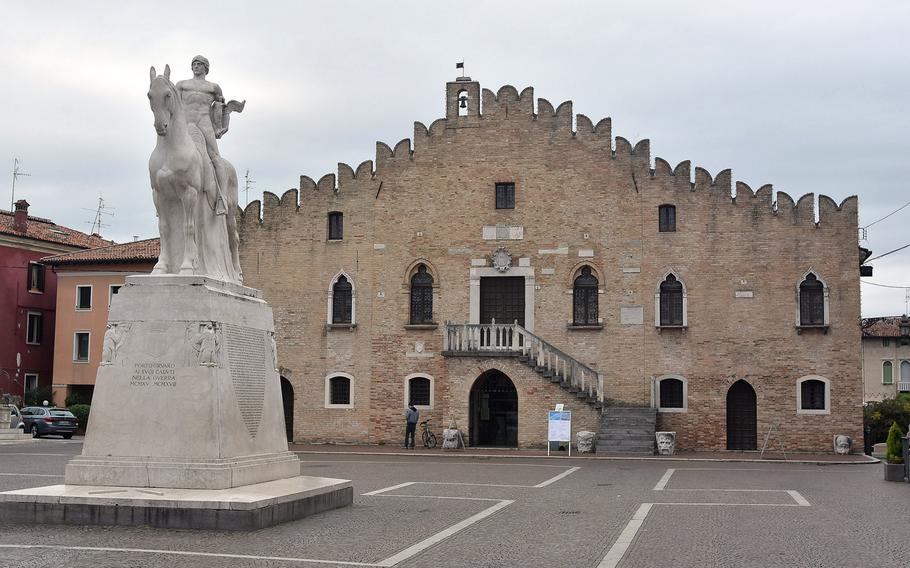 Buy Photo
Portogruaro's city hall is located near the city's cathedral and features a plaza with a statue dedicated to those who lost their lives in war. (Kent Harris/Stars and Stripes) 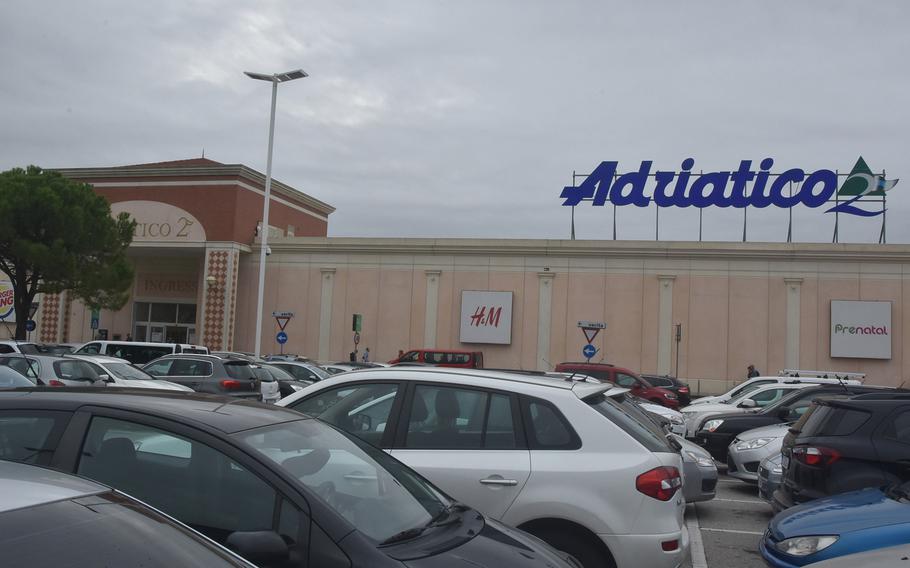 Buy Photo
The Adriatico 2 mall in Portogruaro, Italy, is less than a half-hour's drive from Aviano Air Base. It features a Carrefour supermarket, food court and more than 100 stores. (Kent Harris/Stars and Stripes)

Plenty of Americans assigned to Aviano Air Base know the Italian city of Portogruaro because of where it leads.

It’s where the A28 autostrada, the closest highway to the base, ends and connects to the A4. And it’s roughly halfway to Venice and beach resorts such as Caorle and Lido.

But the city of about 25,000 is more than just a landmark, especially for those driving to the beach when rain starts to fall on the windshield.

One reason is its shopping. There are larger malls farther away in Udine and Villesse and smaller ones closer to Aviano, such as Meduna outside Pordenone.

But Adriatico 2 is only about 24 miles from the base via the A28 and contains more than 100 shops and a food court that offers a few international options for those — gasp — tired of Italian food. And, yes, that includes Burger King in the mall and McDonald’s close by.

It’s also got a Carrefour supermarket. The French chain has a large selection of European foods not available at the commissary.

There are far older reasons to visit as well. Portogruaro’s official founding dates back almost 1,000 years, and the old center has a handful of interesting buildings. Unsurprisingly, several of them are churches. Check out the fading frescoes in the Chiesa di San Giovanni or the sculptures (stone and wood) in the Duomo di San Andrea.

City hall is located near the cathedral in Piazza Republica in a Gothic structure that dates back to the 13th century.

If all that’s not enough, Portogruaro is home to something unique. A local company named Acco built a huge bulldozer it planned to export to Libya. Thanks to sanctions, it never made it. The company no longer exists. But local gardening supplier Bejaflor decided to preserve the 18-ton vehicle — touted as the largest tracked bulldozer in the world — by hauling it to its grounds. It’s currently parked under an overpass to provide some shelter.

DIRECTIONS: Portogruaro is about 24 miles from Aviano Air Base, located where the A28 autostrada ends at the A4 autostrada. It’s a stretch of the A28 that’s toll-free. It’s about an hour from Vicenza. Follow the brown and yellow “Centro Commerciale” signs to the Adriatico 2 mall just minutes from the A28.

COSTS: Free parking on the outskirts of the downtown area and around the mall. There is no admission fee for the city’s churches. You might be able to persuade someone to let you climb on the Acco bulldozer if you ask nicely and buy something from the Bejaflor garden store.

FOOD: There are dozens of restaurants in the downtown area. The mall has a food court with more international flair/fare: Asian, Middle Eastern, German and Burger King.

INFORMATION: The tourist office is located in the city hall on Piazza Republica off Corso Martini di Liberta in the downtown area. Some English spoken. Phone: 0421-277208. Hours: 9:30 a.m. to 12:30 p.m. Monday through Saturday and 3 p.m. to 5 p.m. Monday through Wednesday. The mall website: adriatico2.it