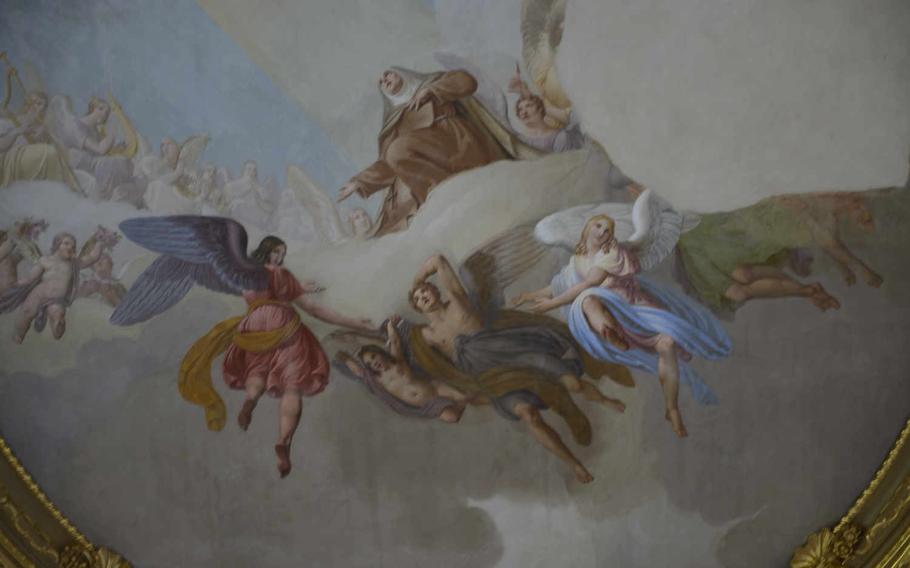 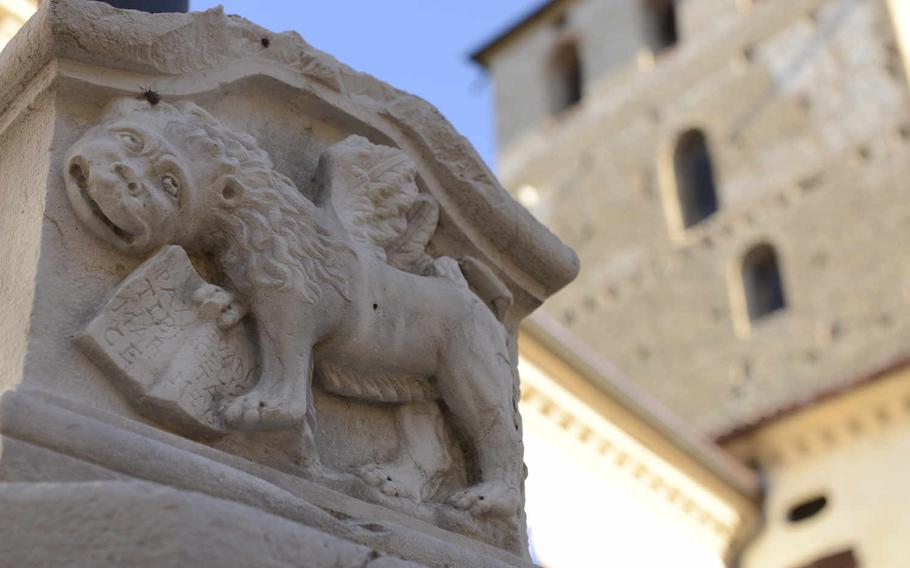 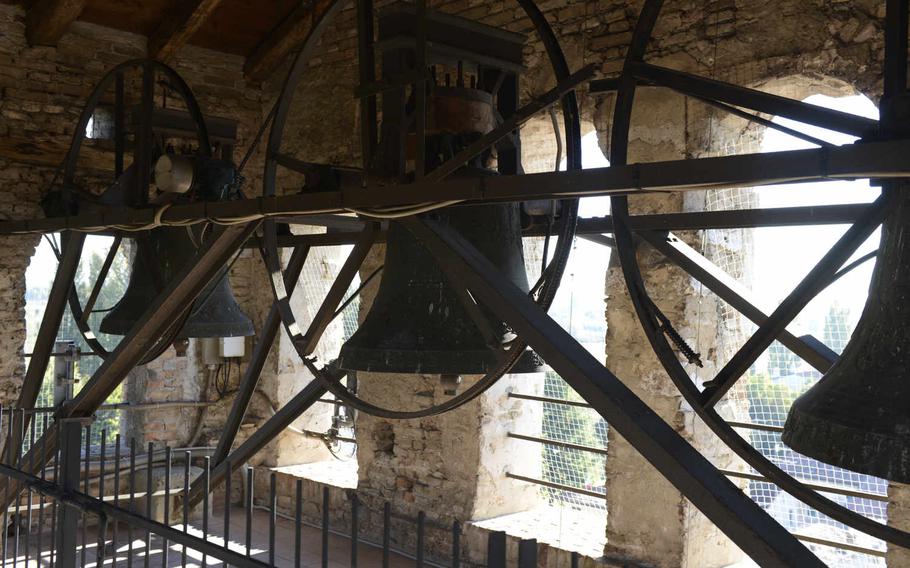 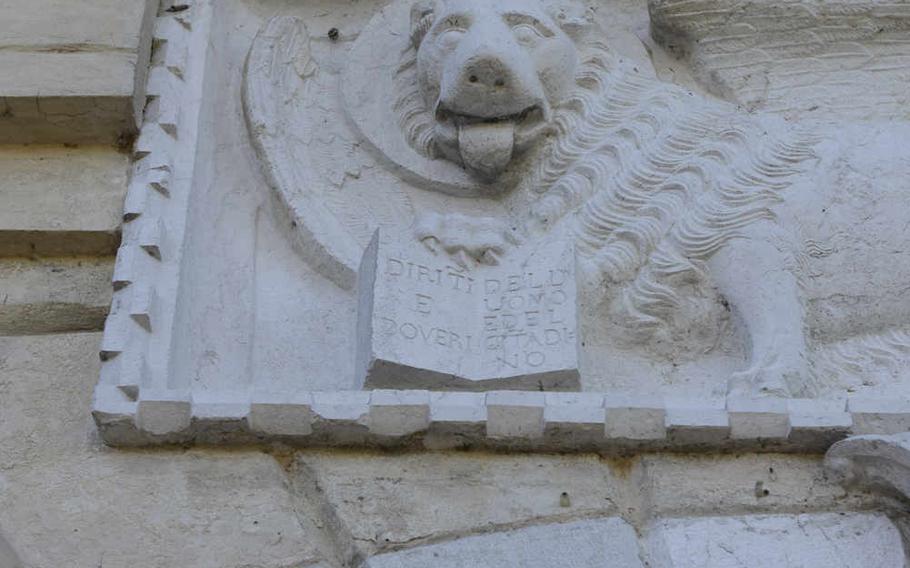 One might think the lion that adorns the Porta Friuli is Portobuffole, Italy, is similar to many found throughout the region. But there's a subtle difference. The words inscribed on the Bible were altered to bring them in line with the French Republic under Napoleon. The tactic seemed to help save the lion when French troops arrived. Kent Harris/Stars and Stripes (Kent Harris/Stars and Stripes) 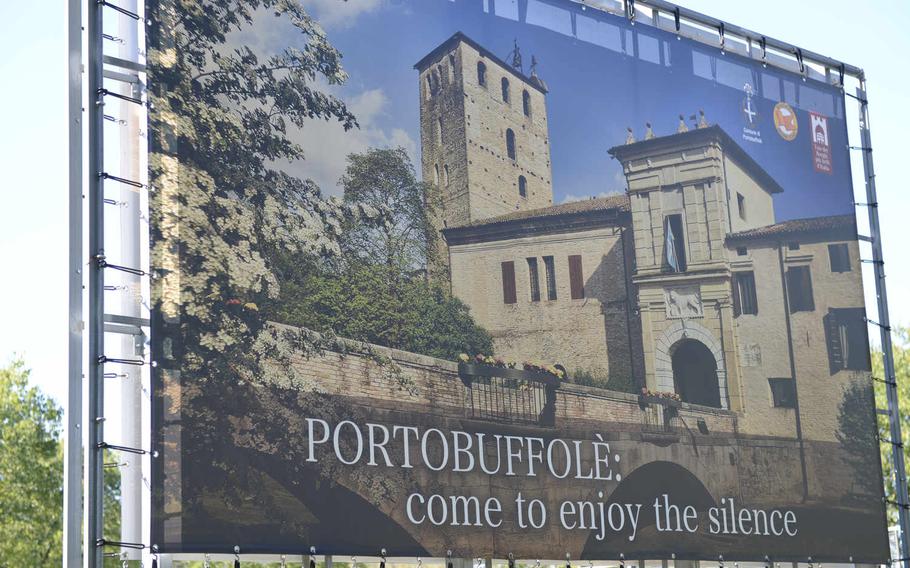 Though it’s probably hard for most Americans stationed at Aviano Air Base to imagine, the A28, A27 and A4 autostrade haven’t been around forever.

Taking some combination of these is the quickest way to get to Venice and much of Italy. But long before the freeways were around — and even well before there was a modern-day Italy or any kind of United States — people were traversing the land between Venice and the Alps along different routes.

One notable route was the Livenza river, used to transport an array of goods from Venice throughout central Europe. It was the quickest way to ship goods at the time. But the boats went only so far before the river became difficult to navigate or the territory too dangerous to traverse. Goods were offloaded at the port, then sent to other places in convoys.

Enter Portobuffole, a town that prospered under the Venetian Republic as an outpost for trade. Goods from Venice — including salt, which was very valuable at the time — were shipped up the river and then loaded onto wagons, horses or (unfortunate) people.

The town dates back far earlier, though. Evidence has been found of people living there for more than 2,000 years. The community’s name has changed several times over that span, and an array of rulers — including Venetians, French and Austrians — have added (or destroyed) touches.

Venice fortified Portobuffole with a wall supported by seven looming towers. It eventually decided it didn’t want a potential rival and destroyed most of the towers. The one that remains today houses a museum. It looms over the last remaining gate, Porto Friuli, built to keep out adversaries from the region that today includes Aviano.

Just before Napoleon’s troops marched in, citizens saved the lion carved into the stone over that gate by changing the wording on the Bible it holds to reflect the motto of the French Revolution.

A hotel/restaurant called Villa Giustinian marks the edge of the historic district; it was once a villa belonging to a French merchant. The grounds feature an array of statues without heads — during World War I, an Austrian soldier stationed at his headquarters there shot them all off with a musket. The Austrians also destroyed the only other gate existing at the time, Porto Treviso, when they left to go back north.

But the most famous part of Portobuffole’s history dates to the early 14th century. That’s when a local lord named Tolberto Da Camino arrived with his wife, Gaia. She died four years later, but her fame lasted much longer: She became known as a patron of artists and poets during her short time in Portobuffole. She’s briefly mentioned in Dante’s “Divine Comedy.”

Gaia’s former home, Casa Gaia, is a museum/art gallery today. Open only on weekends, it hosts a series of art exhibits each year. The main attraction, though, is a few walls featuring frescos dating to the 14th or 15th centuries, perhaps initiated by Gaia herself. Long covered by layers of paint, they were rediscovered only in the 1960s. Cycling enthusiasts can take in the top two floors of the building, touted as one of Italy’s best museums devoted to bicycling.

An audio guide can be rented at the house. There’s also one available at the tourist office, which covers about two dozen points of interest around Portobuffole.

The Livenza, the former lifeblood of the town, runs its course a short distance away. Though still important for local agriculture, its use as a means of transportation has dwindled with the advent of trains and automobiles.

Directions: Portobuffole is about a half-hour’s drive from Aviano Air Base. The quickest route, the SP 35, starts at the southern edge of Pordenone (by the fairgrounds not far from the train station) and passes through Prata Di Pordenone and then Portobuffole on its way to Oderzo.

Prices: It costs 3 euros to visit Casa Gaia. And audio guide costs 2 euros. Unless you have your own guidebook, picking up an audio guide from the tourist office for 2 euros is a good idea.

Food: There are two restaurants downtown and another at the villa on the outskirts. Portobuffole isn’t known for any specialties.

Information: The tourist office, located in the square bordered by the Porto Friuli and the Duomo, is open from 9:30 a.m. to 3:30 p.m. Tuesdays and Thursdays and 10 a.m. to noon Saturdays. Some English is spoken, and brochures in English are available. Email ufficioturistico@comune.portobuffole.tv.it