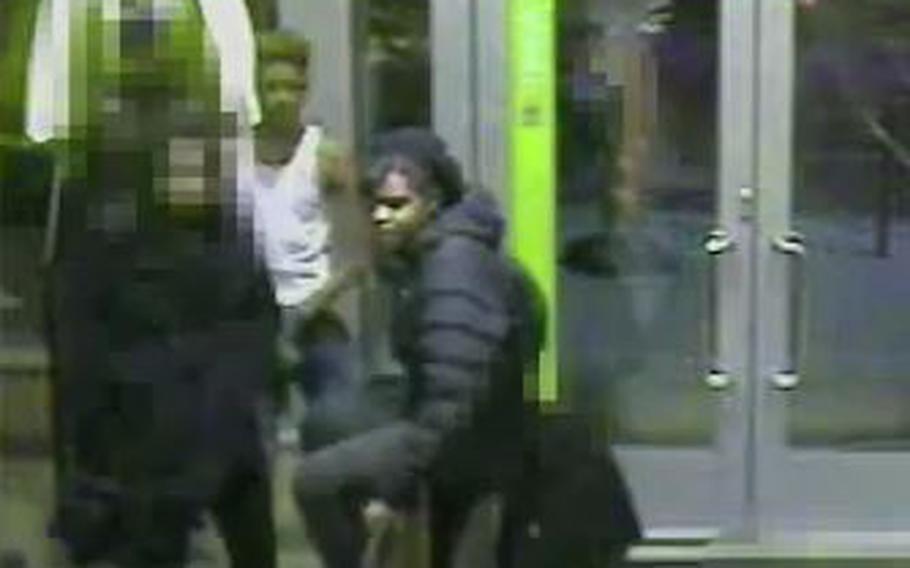 A screenshot from a video released by the DC Metropolitan Police Department of an assault on Marine Christopher Marquez, a Bronze Star recipient who fought in Fallujah, Iraq, in 2004. (YouTube)

WASHINGTON — Police released video and images of suspects in the case of a decorated Marine who was assaulted Friday outside a fast-food restaurant in Washington, D.C.

The surveillance video shows a black assailant in a white tank top punch Christopher Marquez, a Bronze Star with “V” device recipient who fought in Fallujah, Iraq, in 2004, in the head from behind as Marquez walked out of a McDonald’s on E Street across from FBI headquarters. The Marine, who served until 2011, fell to the ground where he appeared to be robbed and kicked in the head.

The D.C. Metropolitan Police Department is investigating the aggravated assault and robbery case near Chinatown and offering $1,000 to anyone with information leading to the arrest of three suspects, including the male who punched Marquez, a woman who appeared to rob him, and another man who kicked him while he was on the ground.

Marquez told other media outlets that he believed the attack was racially motivated and that the assailants had mentioned the “Black Lives Matter” movement to him before the assault.

Marquez was one of three Marines in an iconic photo taken during the second battle of Fallujah. Marquez was photographed carrying a fellow Marine whose uniform is blood-soaked from a wound during the so-called Hell House battle during which one Marine was killed and 10 were wounded.