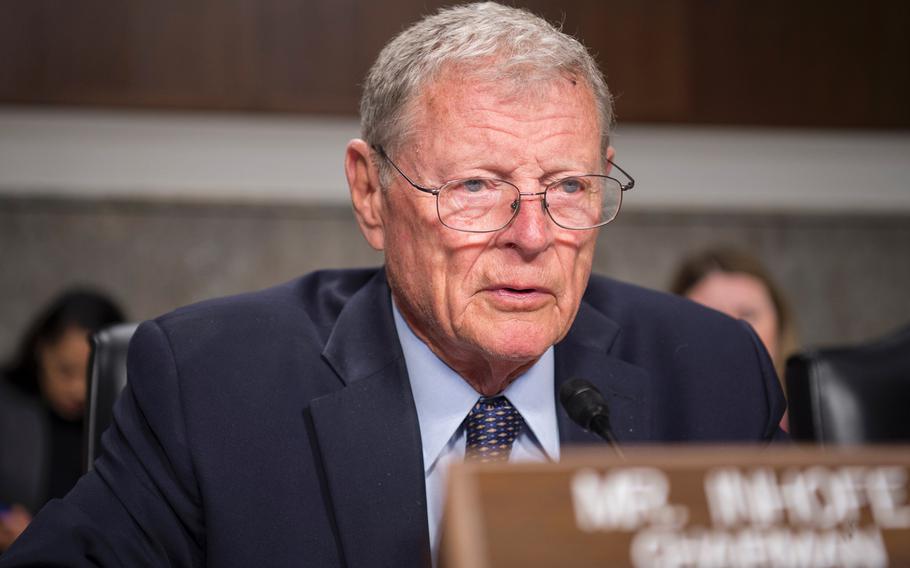 Buy Photo
Senate Armed Services Committee Chairman Sen. Jim Inhofe, R-Okla., attends a hearing on May 2, 2019. Members of the committee on Thursday, May 23, advanced the first draft of defense policy package. The next National Defense Authorization Act, said Inhofe, "provides for $750 billion for national security, providing the resources our military needs to maintain our superiority." (Carlos Bongioanni/Stars and Stripes)

The Senate Armed Services Committee rolled out the new series of efforts as part of its proposal for the next National Defense Authorization Act, or NDAA, which directs policy and spending plans for the Defense Department. The measure is slated for the 2020 fiscal year, which begins Oct. 1.

The panel’s NDAA now heads to the Republican-controlled Senate floor, while the House Armed Services Committee is set to draft their version of the legislation next month.

“Our NDAA provides for $750 billion for national security, providing the resources our military needs to maintain our superiority,” Sen. Jim Inhofe, R-Okla., chairman of the Senate Armed Services Committee, said in a statement Thursday. “It ensures our servicemembers — all volunteers — and their families have the training, resources and equipment they need to complete the mission. Each and every provision addresses some of the most pressing challenges facing our military: curtailing threats from great power competitors and rogue regimes, securing new warfighting frontiers of space and cyberspace, and addressing management issues within the Department of Defense, in particular, privatized housing. I thank the committee for their hard work, and I look forward to strong support of this bill on the Senate floor.”

In March, President Donald Trump’s administration requested a $750 billion national security package, which includes funding for the Pentagon and other agencies such as the Department of Energy. Broken down further, the Trump administration was seeking $718.3 billion specifically for Department of Defense programs in 2020.

In recent months, the Senate and House Armed Services Committees have held dozens of hearings for the 2020 budget priorities on a wide-ranging list of challenges facing the military. Unlike last year, military family concerns drew much attention, from dilapidated and dangerous conditions at housing properties across the country to struggles for spouses looking for work after relocations.

The committee said the legislation moves will re-engage the chain of command to address the “recent, egregious problems with the health and safety of private, on-base housing across the country.”

Kaine said the bill of rights measure is similar to one circulated by the Army recently. And it allows families to withhold housing payments when there’s a dispute.

One in three military spouses work in careers that require an occupational license and too many of them are forced to recertify as they move, Cotton said at a news conference this month on the measure.

The Senate panel’s NDAA legislation also provides a 3.1 percent pay raise for the military, the largest in a decade, and supports the administration’s end strength requests. It authorizes $10 billion for the purchase of 94 F-35 Joint Strike Fighters and $24.1 billion for 12 new ships, including three Arleigh Burke-class destroyers. The proposal also establishes a Space Force command under the Air Force, compromising on a Trump plan to create a new costly, separate military service branch. The Democrat-controlled House has signaled it wouldn’t support a new military branch.

The Senate panel approved the proposal in a 25 to 2 vote.

“This agreement bolsters national defense, invests in advanced technologies and cutting-edge capabilities, and includes needed reforms to support our forces in a dynamic and changing environment,” Rhode Island Sen. Jack Reed, the ranking Democrat on the Senate Armed Services Committee, said in a statement. “The committee’s bill enhances America’s security and advances our national interests. It will help provide our troops with the tools and training they need today, while also looking forward and addressing the challenges of tomorrow. Congress must work together to keep our military strong, efficient, innovative, and capable of safeguarding our nation and deterring conflict. This bill is a positive step forward.”