Pilots in deadly crash at Laughlin Air Force Base identified 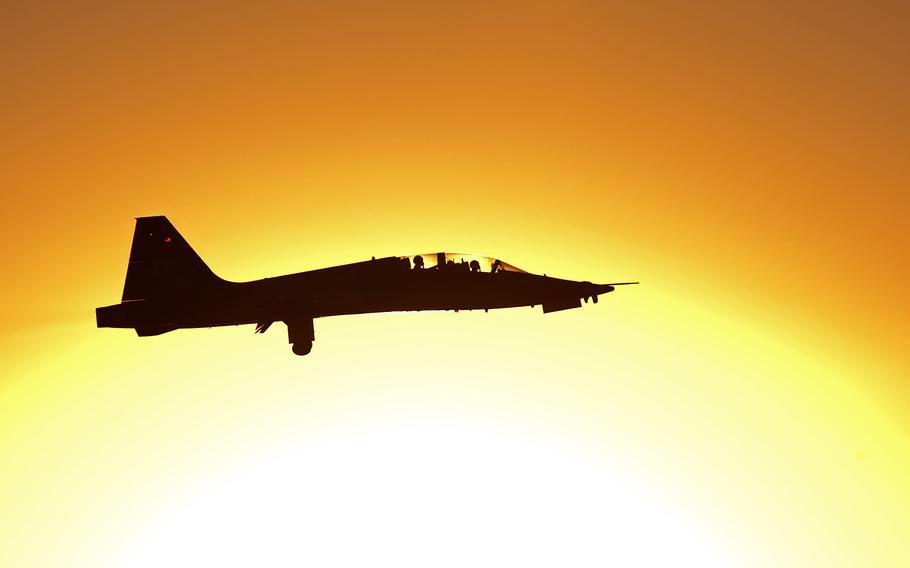 A T-38 Talon is silhouetted against the sun on Oct. 30, 2014. The Air Force on Wednesday, Nov. 22, 2017, released the names of two T-38 pilots involved in a crash at at Laughlin Air Force Base. Capt. Paul J. Barbour, 32, was killed and Capt. Joshua Hammervold was injured and is good condition. (DANNY WEBB/U.S. AIR FORCE)

WASHINGTON — The Air Force on Wednesday released the names of the pilots involved in the deadly T-38 Talon training crash Nov. 20 at Laughlin Air Force Base.

Capt. Paul J. Barbour, 32, of Van Nuys, Calif., was killed in the crash. He was the air crew flight equipment flight commander with the 47th Operations Support Squadron and an instructor pilot with the 87th Flying Training Squadron.

Capt. Joshua Hammervold, an instructor pilot with the 87th squadron, was injured after he ejected from the aircraft. He was treated at Val Verde Regional Medical Center and was released Tuesday in good condition, according to the Air Force statement.

The cause of the accident is under investigation. All flights at the base have been suspended through Thanksgiving weekend.

Laughlin is the Air Force’s largest pilot training center, where pilots learn to fly combat jets by training on the T-38. The twin-engine supersonic jet has been in service with the Air Force since the 1960s.

“Every day, our pilots take a risk as they step into the cockpit, and every day they operate with the utmost skill, professionalism and dedication to train the next generation of flying airmen and to ensure the safety of this great nation,” 47th Flying Training Wing commander Col. Charlie Velino said in the statement.

The Nov. 20 fatal crash marks the 10th this year, with at least 34 servicemembers dead.