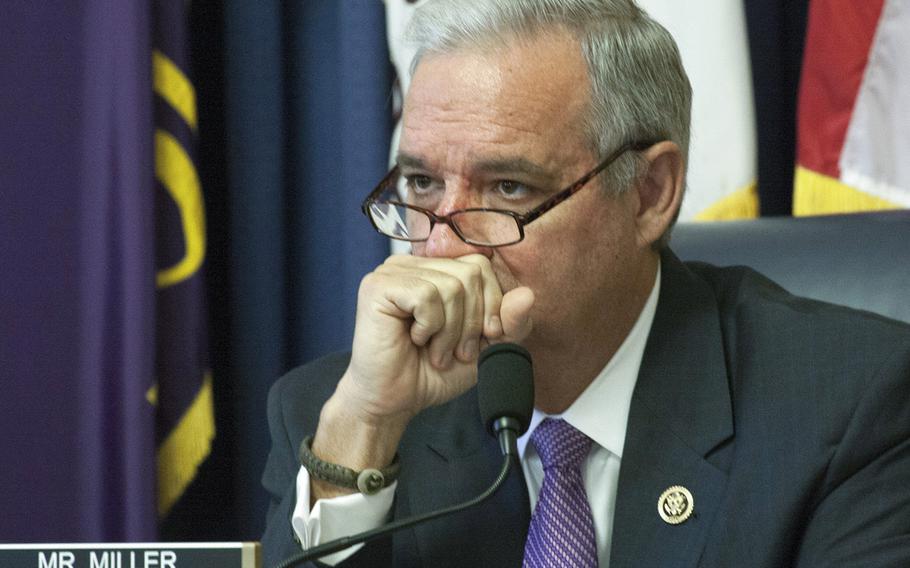 "VA officials say they are committed to accountability, but time and again the behavior of corrupt and incompetent employees goes virtually unpunished," said House Veterans Affairs Committee Chairman Rep. Jeff Miller, R-Fla., shown here listening to testimony on a hearing about the VA in April, 2015. (Joe Gromelski/Stars and Stripes)

"VA officials say they are committed to accountability, but time and again the behavior of corrupt and incompetent employees goes virtually unpunished," said House Veterans Affairs Committee Chairman Rep. Jeff Miller, R-Fla., shown here listening to testimony on a hearing about the VA in April, 2015. (Joe Gromelski/Stars and Stripes) 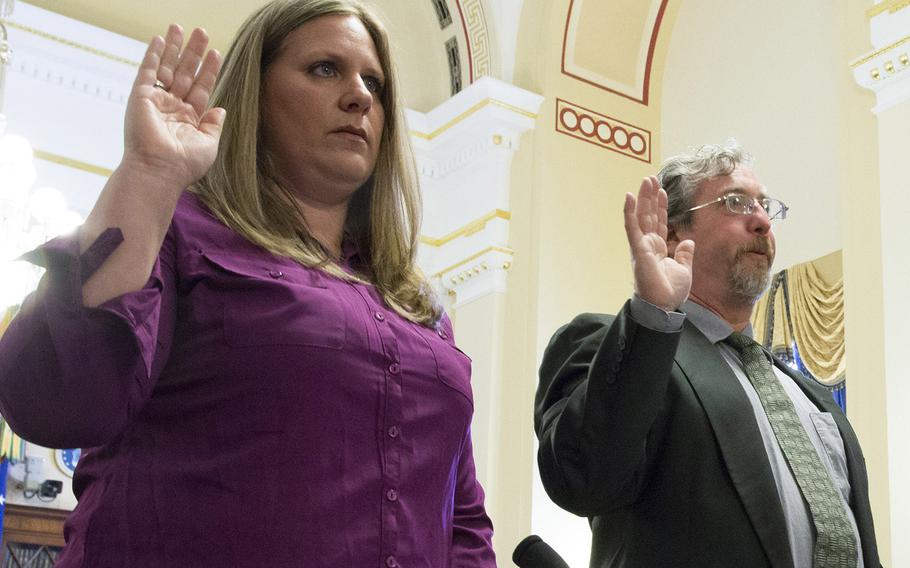 Quality review specialist Kristen Ruell and union representative Joe Malizia of the Philadelphia office are sworn in before a House hearing in April, 2015. (Joe Gromelski/Stars and Stripes) 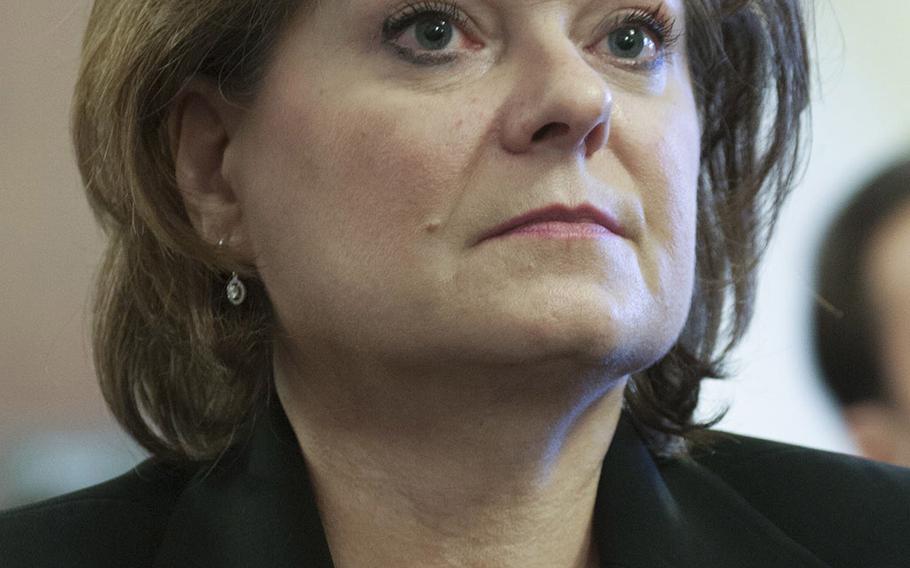 The Department of Veterans Affairs says it has closed the book on its investigation of misconduct at its Philadelphia regional benefits office, without revealing the names of most of the people involved, what they did wrong or their precise punishment.

Though the agency says implicated managers have been removed from decision-making positions, no one associated with the scandals was fired, a VA spokesman confirmed.

In April, the VA Inspector General’s Office issued a scathing report documenting systemic manipulation of data and mismanagement at the Philadelphia office, which handles benefits claims for 825,000 veterans in three states.

The misconduct covered up a huge backlog of claims, with piles of unprocessed mail, documents and inquiries socked away or destroyed.

VA investigators released a second report in May that exposed disturbing misuse of office. It named two managers -- Assistant Director Lucy Filipov and Pension Center Manager Gary Hodge -- in a bizarre incident in which they coerced subordinates to attend a séance at Filipov’s home and asked them to pay for the medium, who was Hodge’s wife. Both managers were suspended.

This week, in the first indication that the VA had concluded its investigations, Hodge and Filipov returned to work in lower positions -- Hodge as a claims examiner (pension analyst) and Filipov as an insurance specialist.

Asked this week about the developments, the VA’s chief spokesman said simply that the cases were closed.

The agency sent a statement last week to lawmakers -- obtained by Stars and Stripes -- announcing that it had concluded its disciplinary actions in the cases, which were the subject of several hearings in front of the House Committee on Veterans’ Affairs. Lawmakers expressed surprise that the VA had conducted its disciplinary activity in secret.

The statement, dated Jan. 6, revealed that the VA had issued two administrative investigative board reports -- on June 30 and Sept. 4. The board conducts investigations -- often following inspector general findings -- to determine punishment. Neither AIB report about Philadelphia was released outside the agency.

The Veterans Benefits Administration said it had “been working diligently to complete the disciplinary actions” and to ensure that the actions could “withstand appeal.”

In all, nine Philadelphia employees were disciplined -- most suspended for a number of days, and some demoted, according to the statement. For some, according to VA information sent to congressional offices and shared with Stars and Stripes, 14-day suspensions were shortened to ease the financial burden on the managers who were punished.

Lawmakers said they didn’t expect the VA to suppress the names of other implicated managers. Congressmen who visited the Philadelphia office in June to grill managers about the scandal said they were expecting an AIB report that would “name names.”

Lawmakers say the VA has ignored requests for copies of the AIB reports. Hutton responded to a similar request from Stars and Stripes, directing the newspaper to submit a Freedom of Information Act request.

“The VA disciplinary actions are welcome news, but without knowing the contents of the AIB reports, I can’t say whether more action is warranted or not,” said Congressman Ryan Costello, R-Pa., a member of the House Committee on Veterans’ Affairs who visited Philadelphia in June. “Consequently, I continue to call for the release of the AIB reports to make sure we get full accountability, and to ensure reform measures are implemented so that these abuses don’t ever happen again.”

Employees at the Philadelphia benefits office said they were surprised to see Filipov and Hodge back at work.

Some expressed relief that the managers responsible for the scandal were no longer calling the shots. Others said they thought the return of these managers added insult to injury, no matter what position they held.

“Employees feel and are expressing their concern that this is a slap in the face,” said Joe Malizia, a union representative at the Philadelphia office. “They feel that proper justice was not administered.”

“The biggest question here: Senior VA management is espousing accountability, but it doesn’t seem it’s playing out with the decision for these management officials here in Philadelphia,” he said.

Malizia said the temporary new management has been doing a good job addressing the problems and restoring morale.

Quality review specialist Kristen Ruell, a whistleblower who said she withstood withering pressure, said the punishments “did send the message that this will not be tolerated.”

“The people in charge were not making decisions in favor of veterans,” she said. “Whether they are fired or not, they are no longer in a position to make those decisions or affect veterans.”

“There was a culture of bullying and people were scared to speak up,” she said. “That has changed. So veterans should know that if there are problems in the future, I think they will speak up.”

But Ken Crandall, who was fired after he exposed Filipov and others, said he feared that the culture of nepotism he witnessed at the VA still remains and is only strengthened by the failure of the VA to fire managers charged with wrongdoing.

“It’s abhorrent that someone who has less than a stellar character is allowed to return to the VA,” he said. “It’s really bad for veterans, bad for employees and sets a terrible example that you can do these things, get away with them for years and not lose your job.”

Crandall also warned that even if qualified managers clean up the Philadelphia office, unless the unqualified employees who were hired under the old system are cleaned out, they will emerge to positions of power again as they get promoted through the system.

“This is yet another example of the sad truth that the federal civil service system is designed to coddle and protect corrupt and incompetent employees rather than seriously discipline them,” he said.

Abuse at Philadelphia did not stop when these whistleblower allegations surfaced. In September, revelations emerged that the director who was brought in to clean up Philadelphia had cheated to get that position at great financial gain to herself.

The inspector general found that Diana Rubens had arranged to be transferred from her position as Deputy Under Secretary for Field Operations to her position as director of Philadelphia and Wilmington VA Regional Offices and that she was able to keep her senior salary for a less demanding job and collect nearly $275,000 in a relocation incentive bonus.

The same report revealed that Kimberly Graves, who oversaw the Eastern Regional Area Office, which included oversight in Philadelphia during the time of the mismanagement, was found guilty of a similar scheme by arranging her transfer to St. Paul and collecting nearly $130,000 in relocation fees.

Both women have since been disciplined – demoted and transferred – but they were allowed to keep their bonuses as well as their VA careers.

The light punishments at Philadelphia were more the rule than the exception, Miller said.

“VA officials say they are committed to accountability, but time and again the behavior of corrupt and incompetent employees goes virtually unpunished – all because the department is too scared to admit that it’s hamstrung by arcane federal rules that put the job security of bureaucrats before service to veterans and taxpayers,” he said. “This case is no exception, and the many hard-working employees of the Philadelphia regional office will suffer because of it.”