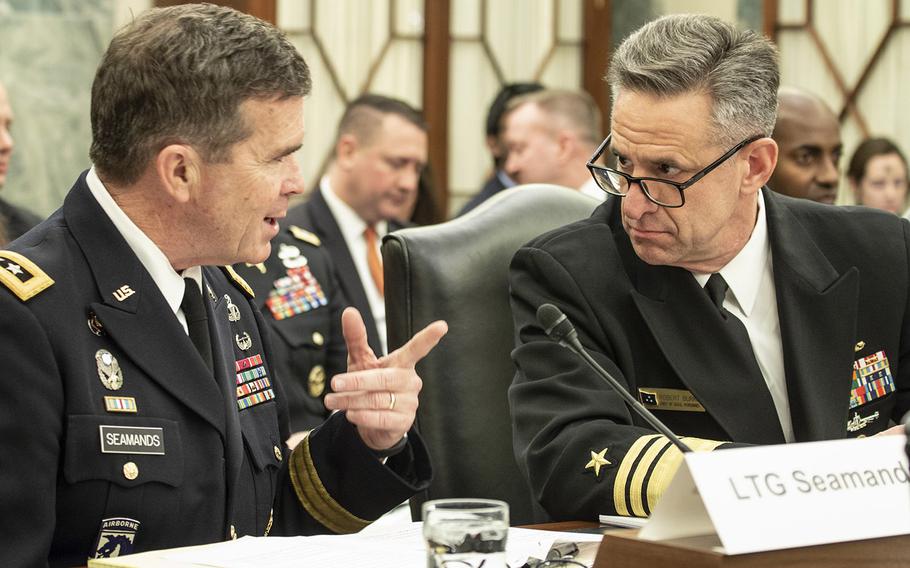 Three-star personnel chiefs and senior non-commissioned officers of the Army, Navy, Air Force and Marine Corps testified Wednesday that unsafe and sometimes scandalous conditions of base housing units, which has sparked waves of complaints from military families, can largely be blamed on leadership failures.

Urgent reforms are underway, they contend, after military leaders and private partnership contractors that operate on-base housing analyzed failings which harmed the health of, and lowered quality of life for, some military families.

Commands across the military had not been attentive enough to the performance of housing contractors who, under a 1997 Military Housing Privatization Initiative, became responsible for construction of new housing and refurbishing legacy units on base. Under long-term contracts, companies profit from maintaining, managing and renting to military tenants who in turn forfeit their monthly Basic Allowance for Housing and sometimes even pay a little more.

Last November an investigation by the news agency Reuters spotlighted the problems. Since then, thousands of families have used advocacy surveys or social media to document the unresponsiveness of contractors and the neglect of commands regarding performance of private partnership ventures.

Two weeks ago, some impacted spouses and executives of the largest on-base housing contractors testified before the Senate Armed Services Committee. The contractors acknowledged management mistakes and equipment failures and apologized. This week, personnel chiefs and enlisted leaders, called to testify on major personnel challenges facing their services, cited failure of leadership on multiple levels for allowing a housing maintenance crisis to bloom.

“Our nation expects our soldiers to protect the nation; our soldiers expect our Army to protect their families. And quite frankly we fell down on the job,” said Lt. Gen. Thomas C. Seamands, Army’s deputy chief of staff for personnel.

“There’s no excuse for it. It’s completely unacceptable,” he added.

Personnel chiefs of every service pointed to lapses in oversight and poor communications between commands and families. All agreed families should never face health hazards and daily frustrations from living in on-base housing atop normal stresses of frequent moves, busy training cycles and long deployments.

Senators promised that the fiscal 2020 defense authorization bill to be passed later this year would mandate a combination of legislative reforms to better protect residents on base, and to strengthen financial penalties for housing contractors who become neglectful landlords.

“I can’t image as a former commander myself having anybody in my unit going to work every day, or being deployed, and having families back home dealing with some of the conditions we [have seen] that are harmful to the health of the family and their children,” said Sen. Martha McSally, R-Ariz., a retired Air Force colonel and the first female fighter pilot to fly in combat. Unresponsive contractors can’t exist without “some disconnects” in oversight from the chain of command, she said.

Vice Adm. Robert P. Burke, chief of naval personnel, acknowledged that housing problems are a “deck plate leadership issue” and that “this relationship between a government agency and a private company should not interfere with that responsibility. And we are stressing that particular point with our leadership.”

Lt. Gen. Brian T. Kelly, Air Force deputy chief of staff for manpower, personnel and services, agreed it’s the responsibility of commanders to ensure airmen and families have quality housing. He echoed the call of his leaders two weeks ago to amend housing contracts by adding a Tenant Bill of Rights.

The Marine Corps reacted to housing failures on its bases with a commandant’s “white letter” to all commands mandating that they attack the deficiencies as a top priority, said Lt. Gen. Michael A. Rocco, deputy commandant for manpower and reserve affairs. “And we’re going to fix this,” he promised.

Every service directed commands to inspect every on-base unit or to offer voluntary inspections to every resident desiring one. They will get contractors to address every problem found, with mold and other health hazards top priorities.

“Within 15 days, every commander has to have a townhall advertised,” said Seamands. “The one at Fort Myer (Va.) is happening tonight. My wife will be there to make sure they understand what’s going on and communicate with the families.

“Within 30 days,” he continued, “a commander from every organization will inspect … 117,000 sets of quarters and 7,000 barracks buildings across our Army to put eyes on where soldiers are living, to make sure that they are adequate and if they’re not adequate to raise the flag. We’re also making sure that the families and soldiers who raise issues understand there won’t be any retaliation from the contractor or anybody else [and] that they have the full support of the Army.”

Every resident of Navy housing will be offered a home inspection, which they can decline, Burke said. Navy also will “evaluate and modify as needed” business agreements with privatized housing partners to ensure they “are properly structured to incentivize the partners’ responsiveness, quality control, management oversight and customer service to our sailors and their families.”

Command involvement will be made permanent to stay engaged, Burke said.

What went wrong, subcommittee chairman Sen. Thom Tillis, R-N.C., asked of the next panel of witnesses, top enlisted leaders of every service.

Master Chief Petty Officer of the Navy Russell Smith blamed a communication disconnect between young families, who use smartphones and social media to raise complaints about living conditions, and more senior folks, who expect frustrated families to reach out in face-to-face meetings or at physical townhall meetings.

“So, we need to be a little bit more diverse in how we reach out to folks and a little more intrusive in trying to pull out information, rather than waiting for them to come to us,” Smith said. Leaders must access “more spaces and places, both online and in person, to ensure that we are actually hearing our sailors.”

Tillis said the housing problems got so bad that everyone must share part of the blame. Tillis said he is particularly curious to learn why more housing liaison offices didn’t sound alarms as housing inventories they oversee deteriorated.

“We’re talking about black mold and leaks and sewage,” said Tillis. “Anybody in the chain of command who says ‘You’re just whining’ if you complain about that” better never send their personnel records “through my committee.”