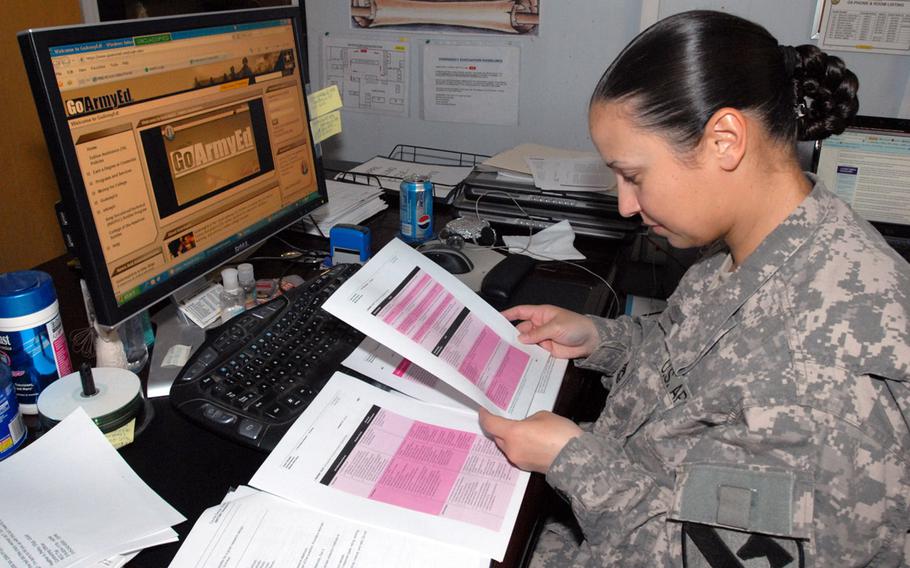 WASHINGTON – Active-duty military students can once again use their tuition assistance benefits at the University of Phoenix after the Pentagon lifted its temporary probation on the for-profit higher education giant last week.

The University of Phoenix will be subject to a “heightened compliance review” for a year, according to the Defense Department, but its probationary status was removed Friday after about three months, allowing the school to return to recruiting on military installations and for active troops to pay for courses through the military’s Tuition Assistance Program.

In a statement the DOD said the University of Phoenix had addressed concerns raised last year by the Pentagon in a letter announcing the probation to the school dated Oct. 7, 2015, from Dawn Bilodeau, chief of the Voluntary Education Program for the DOD.

“The department determined that the removal of probationary status was warranted based on the department’s internal review, the university’s response to the department’s concerns as set forth in multiple potential non-compliance notifications including the department’s letter dated Oct. 7, 2015, the active engagement and cooperation by representatives of the University of Phoenix, and other relevant materials,” the statement read.

Bilodeau’s letter cited several issues including unauthorized use of official military seals and insignia, unapproved visits to military installations and ongoing investigations by California’s attorney general and the Federal Trade Commission. She said the probationary period was intended to “minimize harm to students.”

University of Phoenix President Timothy P. Slottow, who along with several Republican senators had been critical of the DOD’s probation, said he was pleased it had been removed.

“Our commitment to compliance, transparency and continuous improvement remains constant and we are grateful to leaders at the Department of Defense and in Congress for supporting a clear process and high standards from all educational institutions, and for ensuring military students are able to use their educational benefits for career-relevant programs at University of Phoenix,” Slottow said in a prepared statement.

Sen. John McCain, R-Ariz., called the Pentagon’s decision “a victory for due process and basic fairness,” adding he had strongly opposed the probation. McCain, the chairman of the Senate Armed Services Committee, coauthored a letter in October to Defense Secretary Ash Carter questioning the DOD’s decision to suspend the University of Phoenix for “vague, technical violations.”

“The University of Phoenix has complied with all applicable laws, rules, and regulations while providing more than 80,000 servicemembers and veterans with post-secondary degrees,” McCain said. “With (this) decision, I hope the University will continue to serve working adults, veterans, and single parents free from ideological bias or undue political influence.”

The Pentagon’s probation decision came several months after Sen. Dick Durbin, D-Ill., called for the Pentagon and other federal institutions to investigate the school for deceptive marketing practices and other issues.

According to statistics provided by the DOD, nearly 10,000 servicemembers attended the University of Phoenix through the tuition assistance program in fiscal 2014, at a cost to the department of more than $20 million.