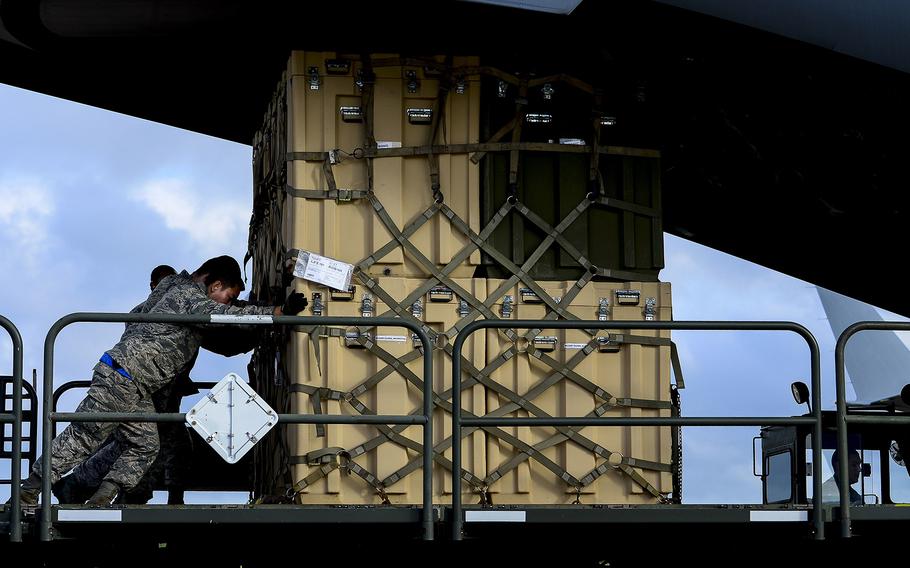 Airmen load cargo onto a C-17 Globemaster at Langley Air Force Base, Va., on Sept. 26, 2014. The C-17 was used to ship the Air Force's Expeditionary Medical Support System, sent as part of a U.S. government effort to support humanitarian relief operations in Ebola-stricken African nations. (Kayla Newman/Courtesy of the U.S. Air Force)

WASHINGTON — The number of U.S. troops deploying to West Africa to confront the Ebola crisis has been doubled, as safety procedures are being put in place to protect American troops from the disease, the Pentagon said Friday.

The deployment of an additional 1,800 soldiers comes on top of Tuesday’s announcement by the Defense Department that 1,400 troops would be sent to combat the pandemic. The influx will bring the total Army commitment to Operation Unified Assistance — which is being run out of Monrovia, Liberia — to 3,200 soldiers.

“We project that there could be nearly 4,000 troops deployed in support of this mission. … And we want to preserve the flexibility to go higher than that if we need to,” he said.

There are about 200 DOD personnel on the ground in Liberia, according to the Pentagon.

Kirby said that assessments about force requirements have changed as commanders have spent more time on the ground gathering information.

A series of safety precautions and protocols are being implemented to try to prevent American soldiers from contracting the virus, which is spread when people come into contact with bodily fluids of those infected.

U.S. troops won’t be taking care of Ebola patients. Most will provide engineering, medical, civil affairs, command and control, aviation and logistical support to a broader international and inter-agency effort to fight the pandemic, which has killed more than 3,000 people.

“They’re getting trained on the disease itself and on how to protect themselves from it,” Kirby said. “While they’re there, they’re going to be constantly monitored on a regular, frequent basis.” After the mission is over, there will be a screening process to make sure they haven’t experienced any symptoms.

Kirby said that the risk of American soldiers getting infected is relatively low. “There is no expectation that U.S. troops are going to be getting close to those who are being treated for Ebola. ... We aren’t going to be in the treatment business,” he said. But if troops need to be in a place where personal protection equipment is required, “we will have that available to them, and they will be trained on how to use it.”

Despite the precautions, the threat of exposure won’t be completely eliminated, according to Kirby. Troops deemed to have been exposed to the virus could be quarantined for up to three weeks and monitored closely to determine whether they were infected. The incubation period for Ebola is two to 21 days. Soldiers not thought to have been exposed won’t be quarantined before they redeploy, Kirby said.

“The focus is going to be on making sure that our troops are not exposed, and if they are exposed, getting them the care that they need as quickly as possible and as efficiently as possible,” he said.

The troops participating in Unified Assistance are coming from a variety of locations. More than 1,800 will come front Fort Campbell, Ky., including elements of the 101st Airborne Division (Air Assault) Headquarters; soldiers from the 101st Sustainment Brigade; elements of the 86th Combat Support Hospital, 44th Medical Brigade; and a Military Police company from the 16th Military Police Brigade.

Troops who deploy to Liberia will receive hardship duty pay of $150 a month, officials said. That’s $75 less than the imminent danger pay that was authorized for the country until June 2014.

A defense official speaking on the condition of anonymity said the combatant commander could move to reinstate imminent danger pay if conditions warrant, but according to DOD policy, such pay only applies in areas affected by civil war, insurrection terrorism and wartime conditions.

The presence of Ebola doesn’t meet the criteria, said the official, who was not authorized to speak publicly.

Hazardous duty incentive pay is authorized for servicemembers working in laboratory conditions with dangerous pathogens — not for the kind of work that will be assigned to most of those who are deploying.

Additionally, troops with dependents will receive a family separation allowance of $250 a month retroactive to the day of arrival, starting after 30 days.

Those who deploy may be eligible for the Humanitarian Service Medal and the Armed Forces Service Medal, although U.S. Africa Command has yet to submit a request for either medal, officials said.