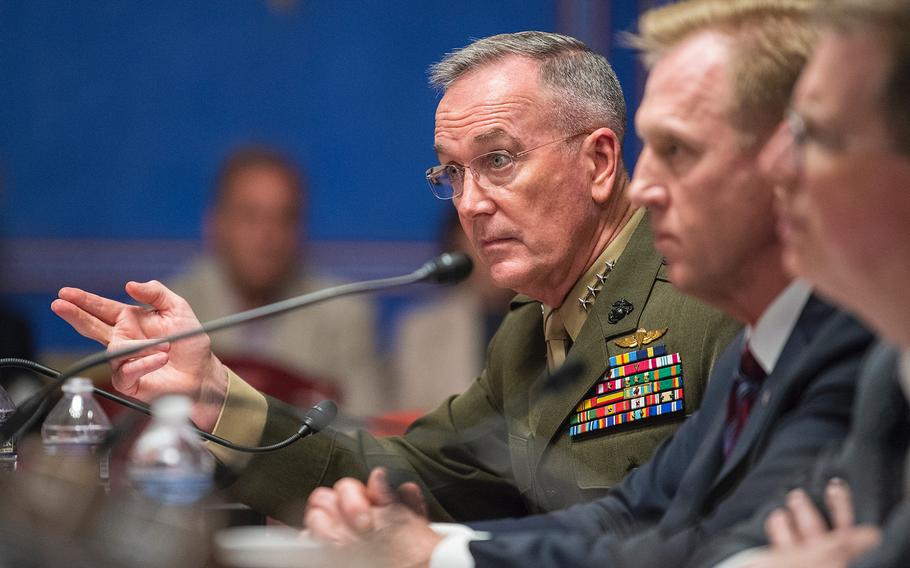 Joint Chiefs of Staff Chairman Gen. Joseph Dunford testifies during a Senate Appropriations subcommittee hearing on Capitol Hill in Washington on Wednesday, May 8, 2019. In the foreground are Acting Defense Secretary Patrick Shanahan, center, and Under Secretary of Defense David Norquist, the DOD's chief financial officer. (Carlos Bongioanni/Stars and Stripes)

The Defense Department is working on a plan now with the Department of Homeland Security that could keep troops at the U.S.-Mexico border for the “next couple years,” a top Pentagon official told Senate lawmakers Wednesday.

Based on Homeland Security’s ability to manage the increasing number of migrants crossing the southern border, Marine Gen. Joseph Dunford, chairman of the Joint Chiefs of Staff, told the Senate Appropriations Committee’s defense subpanel that the two departments want to create “a comprehensive plan for the next couple years.”

“Although the commitment to the border hasn’t impacted preparedness for other missions at this point, what we want to do is get into a more predictable mode of the requirements the Department of Homeland Security has and do better at integrating across the government,” Dunford said during the Senate hearing.

Sen. Richard Shelby, R-Ala., the committee’s chairman, opened his questioning during the hearing on the Pentagon’s proposed budget for fiscal year 2020 by asking Dunford and acting Defense Secretary Pat Shanahan for an update on border operations and how much support the Defense Department could provide “without negatively affecting” other missions.

Shanahan outlined the two main areas of DoD support at the border: the 4,364 servicemembers – made of active-duty troops and National Guard members – providing support to U.S. Customs and Border Protection and the building of a border wall overseen by the Army Corps of Engineers.

Shanahan told lawmakers that there’s enough Pentagon contracts and funding from their budgets and other agencies in place to build more than 250 miles of new border fencing. That represents the construction of about 63 miles of border barriers during the next six months at a rate of about half a mile daily.

“We now have on contract sufficient funds to build about 256 miles of barrier,” he said, adding the money comes from the Pentagon, Homeland Security and the Treasury Department.

Of the troops working along the border, Shanahan said the primary task is the monitor and detection mission, which is carried out by about 1,167 servicemembers. Other tasks include logistics support, food service and aviation assets.

Now, about a year since the first request from President Donald Trump for military support at the southern border, Shanahan said there’s been no impact to readiness.

“In some cases, its enhanced readiness because troops get to perform certain functions,” he said.

Hours later, officials from the Department of Homeland Security testified before the Senate Judiciary Committee’s subpanel on border security and immigration describing the Pentagon’s help as a short-term fix to a larger problem.

The more than 460,000 apprehensions in fiscal year 2019 at the southern border have already surpassed the totals of every year since 2009, said Border Patrol Chief Carla L. Provost. Of the people apprehended, 64% are families, which has forced Border Patrol agents to spend nearly half their time providing child care, medical care and food.

While calling on interagency support -- such as the Defense Department has provided -- can help relieve agents of these tasks and allow them to return to the border and ports of entry, it’s providing “Band-Aid fixes to a worsening situation,” said Manuel Padilla Jr., director of the Department of Homeland Security’s Joint Task Force – West.

Similar to a hurricane, the situation at the border has created “significant humanitarian demands” and has a wide range of effects beyond the point of impact, he said.

“Hurricanes end and recovery can then begin. With a migration crisis, there is no end in sight,” Padilla said. “[It] will continue on until there is fundamental change to our laws.”