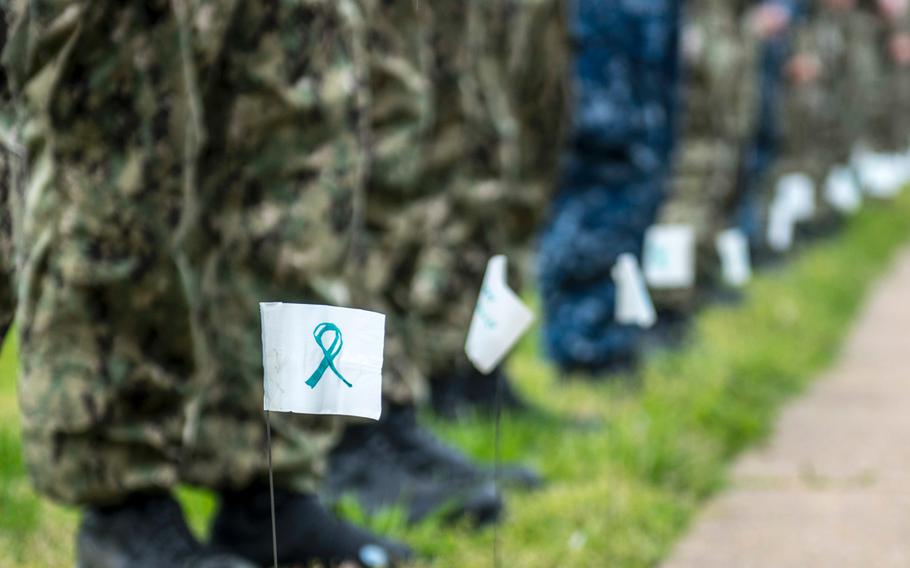 WASHINGTON — A panel of senior Pentagon officials is probing the military’s approach to handling and adjudicating sexual assault and sexual harassment cases as they seek solutions for the decades-old problem of high numbers of incidents within service ranks, the Defense Department announced Tuesday.

The panel, the Sexual Assault Accountability and Investigation Task Force, or SAAITF, will focus largely on reforms and improvements that can be made to the military judicial process to ensure servicemembers’ confidence in the system, acting Defense Secretary Pat Shanahan wrote in a March 27 memorandum establishing the panel. The group is charged with providing Shanahan an interim report on its findings by April 30 and is to provide a full report later to the secretary and members of the Senate Armed Services Committee, according to the memo.

Shanahan’s directive comes after a damning report in January showed incidents of sexual assault at the Pentagon’s military academies had increased by nearly 50 percent while reporting rates for those incidents remained stagnant. It also comes several weeks after Sen. Martha McSally, R-Ariz., revealed during a Senate Armed Services Committee hearing that she was the victim of rape while serving in the Air Force, but she never reported it because she did not have faith in the military’s justice system.

In his memo, Shanahan called the results of that report “unacceptable,” and he said he had met privately to discuss the issue with McSally, a retired Air Force colonel and the first American woman to fly in combat.

“I am resolved that we will do all we can as a department to address sexual assault in our military,” wrote Shanahan, who has served as the defense chief on a temporary basis since Jan. 1. “I pledged to do more, and I intend to carry out this commitment.”

SAAITF is led by Elizabeth P. Van Winkle, the executive director of the Office of Force Resiliency, and the top military lawyers for each of the Pentagon’s military services, according to the memo. It will also include the director of the Pentagon’s Sexual Assault Prevention and Response Office, high level representatives from the military’s criminal investigative organizations, and an official from the Defense Department’s general counsel office.

The Defense Department’s 2018 “Report on Sexual Harassment and Violence at the Service Academies” included an anonymous survey of servicemembers that found 50 percent of women and 16 percent of men said they had experienced sexual harassment. The report is issued every two years.

The 2018 survey also found about 747 students at service academies indicated they had experienced unwanted sexual contact within the last year, compared with 507 students in 2016.

The issue has plagued more than just the service academies. In fiscal year 2017, more than 5,000 servicemembers reported they had been the victim of a sexual assault while they were in the military, according to Pentagon data. Only about 8 percent of those cases were prosecuted through the Uniform Code of Military Justice and only 3 percent resulted in a conviction.

Among the issues the panel is expected to consider is the involvement of commanders in prosecuting sexual assault. Some top leaders and lawmakers, including Sen. Kirsten Gillibrand, D-N.Y., have long lobbied to remove commanders from the legal process in sexual assault cases to avoid conflicts of interest and put those decisions in the hands of trained prosecutors. However, others, including McSally, have insisted commanders must be involved in the cases — as they are in other criminal cases within the military — because it is part of their responsibility as leaders.

“I don’t want commanders to be off the hook,” McSally said last month. “I need them to be more responsible for solving this issue.”

The military has for years attempted to quash its problems with sexual assault and sexual harassment, prescribing mandatory training programs for all of its troops and civilian personnel among other initiatives. Earlier this month, the secretaries of the Army, Navy and Air Force hosted a first-of-its-kind conference at the U.S. Naval Academy in Annapolis, Md., to hold a “national discussion” on sexual assault and harassment at the service academies and other American academic institutions.

“The importance of this work cannot be overstated,” Shanahan wrote in his memo. “We have an opportunity to underscore the integrity of our military justice system and advance our capability to address sexual misconduct against the men and women of our armed forces, while improving the readiness and lethality of the DoD. Only through diligence and innovation will we eliminate this reprehensible crime from our ranks.”