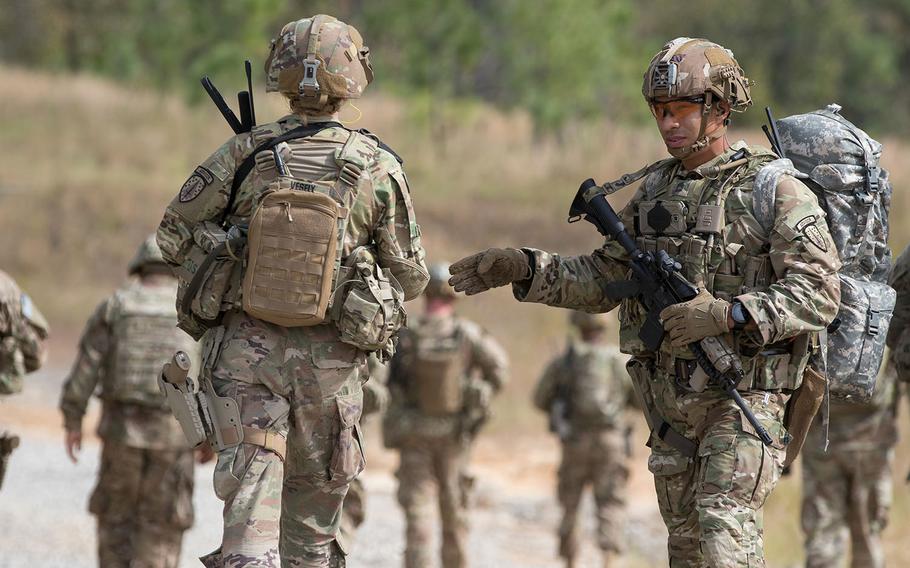 Soldiers from the 2nd Battalion, 2nd Security Force Assistance Brigade move to a nearby village as part of a live-fire exercise at Fort Bragg, N.C., on Oct. 24, 2018. (Andrew McNeil/U.S. Army)

WASHINGTON — The Pentagon has shed some 21,000 servicemembers from its list of nondeployable troops since implementing its so-called “deploy-or-get-out” policy last summer, the acting defense secretary announced Thursday.

The Pentagon is nearing its goal of reducing troops deemed unfit for combat to less than 5 percent of the force, Pat Shanahan wrote in his testimony provided to the Senate Armed Services Committee. Currently, the military has reduced that rate to about 5.4 percent, according to Shanahan, who has been serving as acting Pentagon chief since January.

“A key element of strengthening our military and increasing lethality is ensuring our warfighters achieve established physical, mental, and security vetting standards,” he wrote in the statement provided to senators ahead of a hearing to defend the Pentagon’s proposed budget of $718.3 billion for fiscal year 2020. “War is unforgiving, and our mission demands we remain a standards-based organization.”

The “deploy-or-get-out” policy was the brainchild of former Defense Secretary Jim Mattis, who aimed to drastically reduce the number of troops deemed unfit to serve in combat for factors including medical issues, fitness problems and administrative reasons. In January 2018, Mattis said about 11 percent of the military force, some 235,000 troops, were characterized as nondeployable.

The policy was meant to motivate the thousands of troops who remained in uniform despite being unable to deploy to take the necessary steps to return to deployable status, officials have said. Servicemembers who were unable or unwilling to make the necessary changes within 12 months were warned that they would face selection for involuntary separation from the military.

Servicemembers can actually be removed from the military sooner if their chain of command determines they will not be able to return to a deployable status in one year.

Shanahan did not provide an explanation for how the Pentagon reduced its nondeployable troops by about 21,000 since June, though it was likely through a combination of kicking out noncompliant troops and other servicemembers taking necessary steps to return to a deployable status.

Mattis said last year that the policy change would ensure the burden of deploying was better spread throughout the military force and it would increase combat readiness because more servicemembers would be available to deploy.

The individual military services in recent months have published their own guidelines for retaining deployable status – primarily a combination of physical fitness and administrative standards. The Army drastically reduced its number of nondeployable soldiers by adjusting their standards. For example, the service no longer classifies soldiers who miss yearly medical or dental exams as nondeployable.

Some individuals have been exempted, at least temporarily, from the policy. It makes exceptions for servicemembers who are pregnant or postpartum and for combat-injured servicemembers, among others. However, troops who are exempt temporarily are expected to return to a deployable status eventually, according to the policy.

“In upholding systematically applied standards, we ensure the readiness of our joint force and cohesion of our units,” Shanahan wrote.