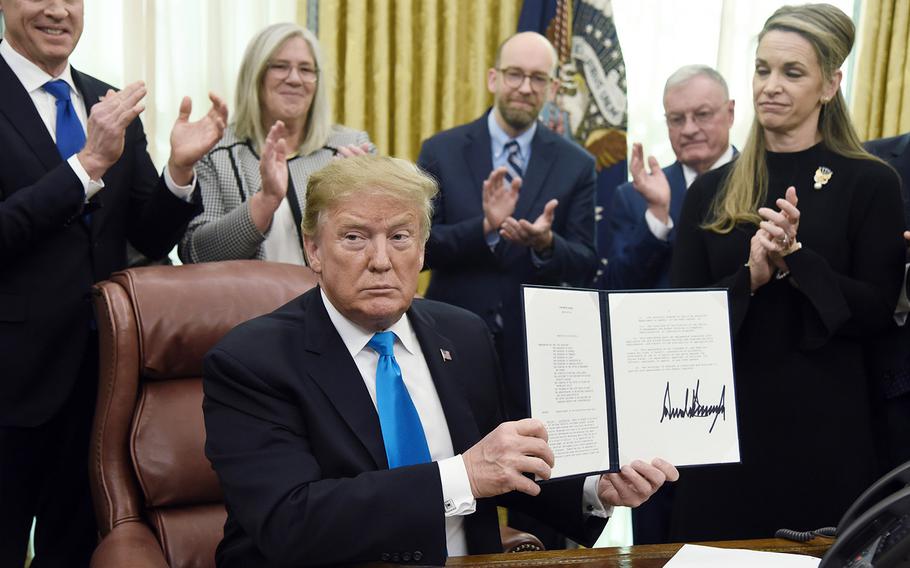 WASHINGTON – The Pentagon wants $2 billion for the next five years to establish President Donald Trump’s proposed Space Force, a sixth military service that would be built from the other services’ existing space-focused enterprises, according to a proposal sent to Capitol Hill this week.

The plan delivered to lawmakers on Wednesday asks Congress to provide $72 million in fiscal year 2020 to establish Space Force’s Pentagon headquarters, which would consist initially of about 200 people, a combination of uniformed servicemembers and civilians, according to the documents released Friday by the Pentagon. Troops would come from each of the existing military services, including a four-star general who would sit on the Joint Chiefs of Staff, and be charged with preparing the new force to receive operational units in stages through the following four years, the 11-page document states.

Congress would have to approve any steps that the Pentagon could take to establish a Space Force, and top Defense Department officials hope lawmakers will include such authorities in its annual defense appropriations bill due later this year. It is unclear precisely how much appetite Congress has for establishing a Space Force.

Acting Defense Secretary Pat Shanahan called the proposal an “historic moment for our nation,” in a statement released Friday.

Space Force “is a strategic step towards securing America’s vital national interests in space,” he said. “Our approach follows President Trump’s bold vision for space and commits resources to deliver more capability faster, ensuring the United States can compete, deter, and, if needed, win in a complex domain.”

Building Space Force within the Department of the Air Force is designed to save overhead costs, according to five senior defense officials, who spoke with reporters Friday about the proposal on the condition they not be identified by name. That means the force would consist only of personnel directly focused on the space mission and would not include support troops such as medics, chaplains or cooks.

For now, the Pentagon is pitching Space Force as a small, specialized service aimed solely at operating and protecting the U.S. military’s vast space enterprise, which includes more than 100 satellites and is critical in its ability to communicate worldwide as well as to direct its forces and aim its weapons.

The proposal outlines a force that once built by the end of fiscal year 2024 would consist of some 15,000 personnel, making it by far the smallest of the military services. That force would include enlisted troops, commissioned officers and civilian officials. The senior Pentagon officials declined to detail how many of each would be in the service.

Space Force would include elements focused on space operations, acquisition and systems development, and training and education, according to the documents.

The officials said at some point the Pentagon would likely propose establishing a Space Force Department, separating it completely from the Air Force. Any such proposal would be years away, according to the senior defense officials.

After establishing the headquarters in fiscal year 2020, the Space Force would absorb at least a portion of the Air Force’s space units in 2021, according to the proposal. Similar units from the other military services would be transferred into Space Force during the following three years.

Neither the proposal nor the senior defense officials indicated whether the Pentagon had determined how it would move servicemembers from their branch into the Space Force or whether they would have the ability to decline such a transfer. Those decisions would be the responsibility of the defense secretary, according to the proposal.

The documents do indicate personnel who choose to transfer or are forced to transfer into the Space Force would not be penalized for doing so. They would be moved at their current ranks and retain their current salaries. A transfer also would not impact their retirement eligibility, the proposal states.

Other decisions about the Space Force could be years in the future. The defense officials said they had yet to determine how initial entrance training would work for Space Force recruits, when new recruits would be able to join the Space Force or whether the service would have its own uniform.

Space Force would be the military’s first new service established since the Air Force was split from the Army in 1947. Building the new service will require years of decision-making, one of the officials said.