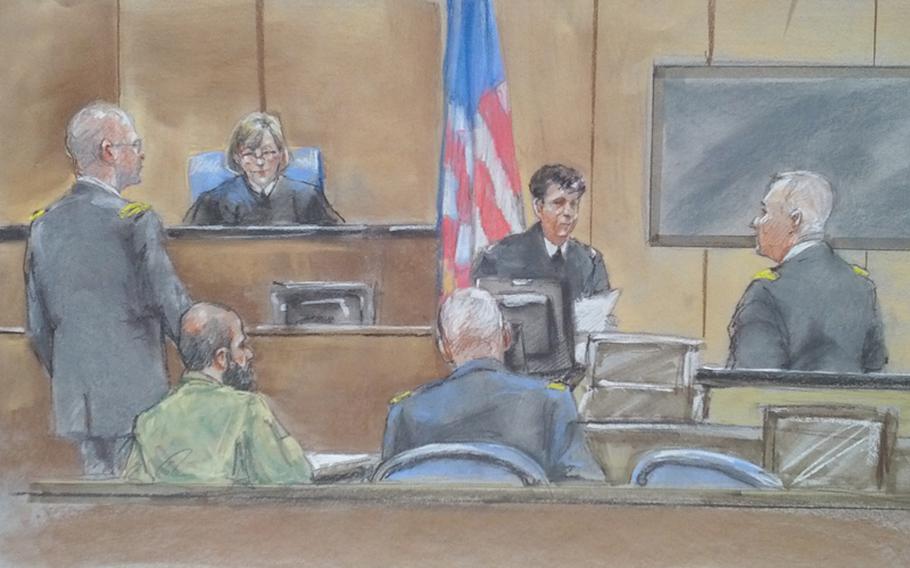 In this sketch by courtroom artist Brigitte Woosley, Air Force Lt. Col. Edward Mazuchowski testifies Aug. 14, 2013, in the ongoing trial of Maj. Nidal Hasan. Mazuchowski is a forensic pathologist who performed autopsies on two of the victims of the Nov. 5, 2009 shooting at Ft. Hood. (Stars and Stripes)

As the shooter moved through a clinic at Fort Hood on Nov. 5, 2009, he shot soldiers again and again, from various angles, according to the military officers who performed the autopsies who testified Thursday as the trial of Maj. Nidal Hasan continued.

Greene was shot so many times that the medical examiner who did his autopsy found it difficult to determine the path the bullets took, using a metal rod to ensure he was correct. He concluded that the shooter and Greene were likely moving during the incident, and Greene may have been attempting to subdue Hasan.

But Col. Tara Osborn, the judge, ruled that the autopsy photos with the metal rods “unnecessarily focus on the utensils and implements” used to determine the trajectory, and asked the prosecutors to find different photos of the gunshot wounds to admit into evidence.

Lt. Col. Phillip Berran, who examined Greene and Spc. Aaron Nemelka’s bodies, described in gruesome detail how the gunshots would have affected the men. One of the three shots Nemelka suffered injured his left lung, Berran said, which would have caused a feeling “kind of like you’re drowning in your own blood.”

On Wednesday afternoon, Osborn made another ruling that affected what prosecutors can introduce into evidence. She ruled that prosecutors cannot use or even read documents from a 2010 sanity board that Hasan has released to the media through his civilian lawyer.

According to documents released to the New York Times, Hasan told mental experts that he “would still be a martyr” if he died by lethal injection and that what he did wasn’t wrong “because it was for the greater cause of helping my Muslim brothers.”