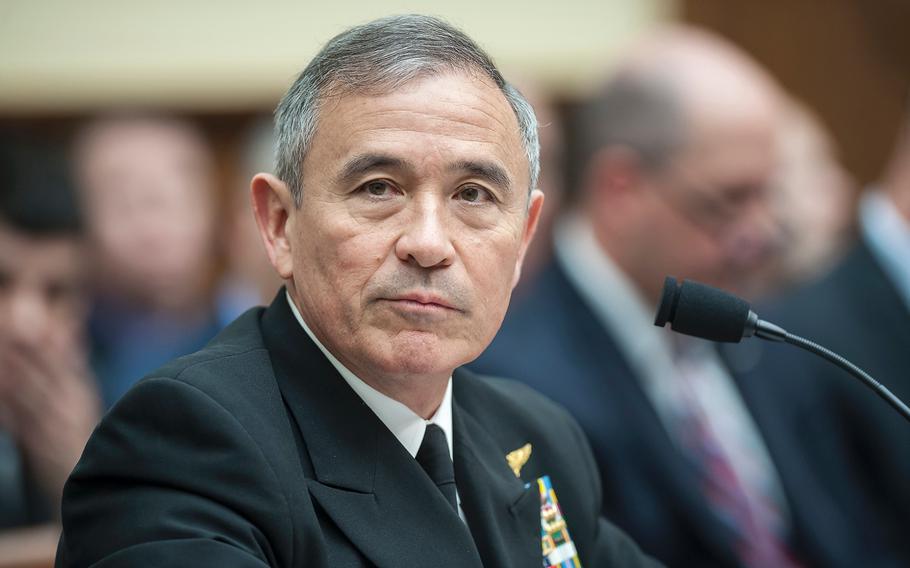 Buy Photo
U.S. Pacific Command Commander Adm. Harry Harris addresses members of the House Committee on Armed Services on Wednesday, April 26, 2017, during a hearing on Capitol Hill in Washington, D.C., where he stressed the importance of America's engagement in the Indo-Asia-Pacific region. (Carlos Bongioanni/Stars and Stripes)

Buy Photo
U.S. Pacific Command Commander Adm. Harry Harris addresses members of the House Committee on Armed Services on Wednesday, April 26, 2017, during a hearing on Capitol Hill in Washington, D.C., where he stressed the importance of America's engagement in the Indo-Asia-Pacific region. (Carlos Bongioanni/Stars and Stripes) Buy Photo
Adm. Harry Harris arranges his notes after giving his opening statements during a House Committee on Armed Services hearing on Capitol Hill in Washington, D.C., on Wednesday, April 26, 2017. Harris, the commander of the U.S. Pacific Command, was addressing the importance of America's engagement in the Indo-Asia-Pacific region. (Carlos Bongioanni/Stars and Stripes) Buy Photo
Adm. Harry Harris listens to a question during a House Committee on Armed Services hearing on Capitol Hill in Washington, D.C., on Wednesday, April 26, 2017. Harris, the commander of the U.S. Pacific Command, testified before committee members concerning the importance of America's engagement in the Indo-Asia-Pacific region. (Carlos Bongioanni/Stars and Stripes)

WASHINGTON — With tensions high on the Korean peninsula, the commander of the U.S. Pacific Command on Wednesday called on Congress to repeal the spending caps known as sequestration and invest more in missile defense, radar systems and equipment and submarines to counter the North Korean threat.

“We must be ready to confront all challenges from a position of strength and with credible power,” Navy Adm. Harry Harris told the House Committee on Armed Services.

“I need weapons systems of increased lethality, precision, speed and range that are networked and cost-effective,” he said. “Restricting ourselves with funding uncertainties reduces war-fighting readiness, so I urge Congress to repeal sequestration and approve the proposed Defense Department budget.”

Wednesday’s testimony was one of several appearances by Harris on Capitol Hill this week and comes amid heightened focus on North Korea’s press to develop and test its nuclear weapons capabilities and ballistic missiles. President Kim Jong Un has said he wants to use the missiles with nuclear warheads to strike U.S. cities, including New York and Washington.

Harris was to brief lawmakers on the committee privately after the public session. He will testify before the Senate Armed Services Committee on Thursday.

Harris told lawmakers that while North Korea is the most immediate threat faced by the United States and its allies in the region, Russia, China and the spread of the Islamic State must all be reckoned with.

As the current ISIS fight in the Middle East progresses, Harris said ISIS fighters from the Asia Pacific region will head home with their militant ideology so that must be addressed. Russia continues to modernize its weapons and military, he said.

And, as North Korea’s only treaty partner, China plays a critical role -- as a growing power that has shown willingness to defy international conventions to expand its military domination in the South China Sea, and in its influence on North Korea. China’s economic influence is particularly strong, since 80 percent of North Korea’s economy is based on China’s exports, he said.

Harris said he was encouraged that Beijing is showing new willingness to exert influence. He told the panel the U.S. defensive anti-ballistic missile system known as THAAD, or Terminal High Altitude Area Defense, will be operational in South Korea in the coming days. He was perplexed, he said, by China’s economic pressure on big South Korean corporations to protest THAAD.

While the committee’s ranking Democrat, Rep. Adam Smith of Washington, said he was reasonably confident that the North Korean regime was not suicidal and likely would not enter in a full-scale war unprovoked, Harris said he wasn’t so sure.

“I don’t share your confidence that North Korea is not going to attack either South Korea or Japan or U.S. territories … once they have the capability,” he said. “I believe we have to look at North Korea as if Kim Jong Un will do what he says.”

Harris said U.S. forces face shortfalls that impact readiness. Among them: small bombs being depleted from Pacific Command stockpiles to feed the Middle East ISIS fight; and air-to-air weapons being used by U.S. fighter jets, torpedoes and, in the long term, submarines. He warned that China is working to close the large gap in military capabilities, and that the U.S. has to remain diligent to preserve its advantage.

“I must assume Kim Jong Un’s nuclear claims are true,” Harris said. “That should provide all of us a sense of urgency to ensure (Pacific Command) and (U.S. Forces Korea) are prepared to fight tonight with the best technology on the planet.”