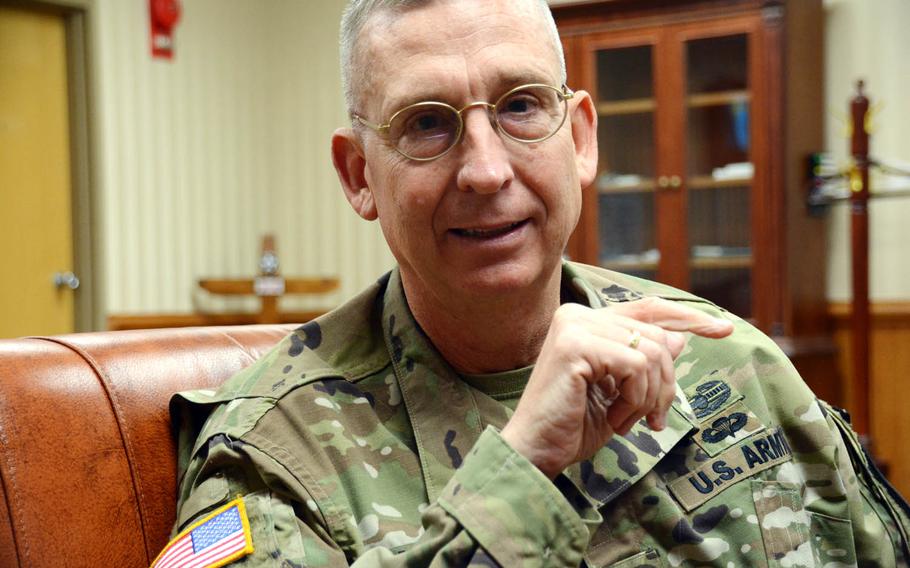 CAMP RED CLOUD, South Korea — The outgoing 2nd Infantry Division commander defended the use of rotational forces as the best way to maintain readiness against an increasingly threatening North Korea despite a recent report concluding that forward-based units would be more efficient.

Maj. Gen. Ted Martin — who has overseen the transition from the permanently stationed Iron Brigade to the rotational system — said the training dividends from having cohesive units that deploy together outweigh the disadvantages.

“I am a big fan of the rotational brigade,” the 56-year-old Jacksonville Beach, Fla., native told Stars and Stripes on Monday. The United States maintains about 28,500 servicemembers in the South to help maintain an armistice that ended the 1950-53 Korean War in lieu of a peace treaty.

In July 2015, the Army inactivated the 1st Armored Brigade Combat Team, known as the Iron Brigade, which had served near the border with North Korea for 50 years. It was replaced with brigades sent to the peninsula on nine-month deployments.

So far there have been four of them, with the Fort Hood, Texas-based 2nd Armored Brigade Combat Team, 1st Cavalry Division taking over late last month. It’s the second turn for the Black Jack brigade, which was the first rotational unit to arrive two years ago.

A new Army War College report called “Rotational Deployments vs. Forward Stationing” found that the use of rotational forces in Europe and South Korea has cost more than expected and taken a toll on troop morale that has possibly led to lower re-enlistment rates.

The author, War College professor John Deni, said basing brigades in the two theaters would also demonstrate stronger commitment to U.S. allies. The report will be released later this summer, but Deni outlined his findings during a recent panel discussion at the Atlantic Council in Washington.

Martin, who assumed command in April 2015 and said he was surprised he hadn’t been questioned for the report, insisted the new system provides important continuity by ending a high turnover rate that had plagued the Iron Brigade as soldiers cycled in and out according to individual terms.

“So the ability of the unit to get to a high level of collective training efficiency was very difficult and it was even more difficult to sustain it,” Martin said, adding as much as 12 percent of a formation would be transferred in a given month.

“While the Iron Brigade was a fantastic outfit, what I got in turn was … a unit that had trained together for almost a year,” he said, adding that’s particularly important for units that need to hit the ground running and adapt to the mountainous terrain in South Korea.

Once on the peninsula, the soldiers stay together for nine months and train intensively with their South Korean counterparts. The 2ID is the first division to combine the allied forces.

“What I’m telling you in a nutshell is they came in good. We delivered back to the Army the most combat-ready brigade combat team in the Army,” he said.

A major drawback is the potential impact the revolving door of troops can have on relationships with South Korean forces, said Martin, who stressed that can be mitigated.

“If we’re not careful we can lose the partnership,” he said. “The battalion brigade level command teams have to invest a lot of time and energy into maintaining and doing the handoff because the personal relationships are just so important. This is not an all-American show.

“We found out we have to put much time into getting to know partners. It can’t be all business. It’s got to be soccer games together, spending time eating in mess halls with us, doing combined briefings,” he said, contrasting the environment in South Korea with that in Iraq and Afghanistan.

“Even though we were doing things with them you never really want to get too close. Here it’s the other way around,” he said.

Martin will hand over his command next week to Maj. Gen. Dennis Scott McKean, who is due to oversee another historic milestone for the division, which celebrates its centennial on Oct. 26.

The 2ID, which has about 14,000 U.S. and South Korean soldiers, is in the process of moving to an expanded Camp Humphreys as part of a long-delayed relocation of the bulk of U.S. Forces Korea to hubs south of Seoul.

Martin played down concerns about pulling away manpower from the front lines at a time when tensions are high over North Korea’s nuclear weapons program. U.S. troops will continue to train on ranges near the heavily fortified border, and the 210th Field Artillery Brigade that will remain in the area for the foreseeable future as the first line of defense against the North.

“So on any given day in addition to the counterfire task force … I’m going to have at least 33 to 45 percent of the brigade up here training,” he said, adding there are contingency plans in case rapid movement north is needed.

“The Han River is the big barrier that we’ve got to get across,” Martin said. He noted the soldiers would have access to a new rail system and quality roads but declined to give more strategic details. “I’m very confident that I can move like lightning.”