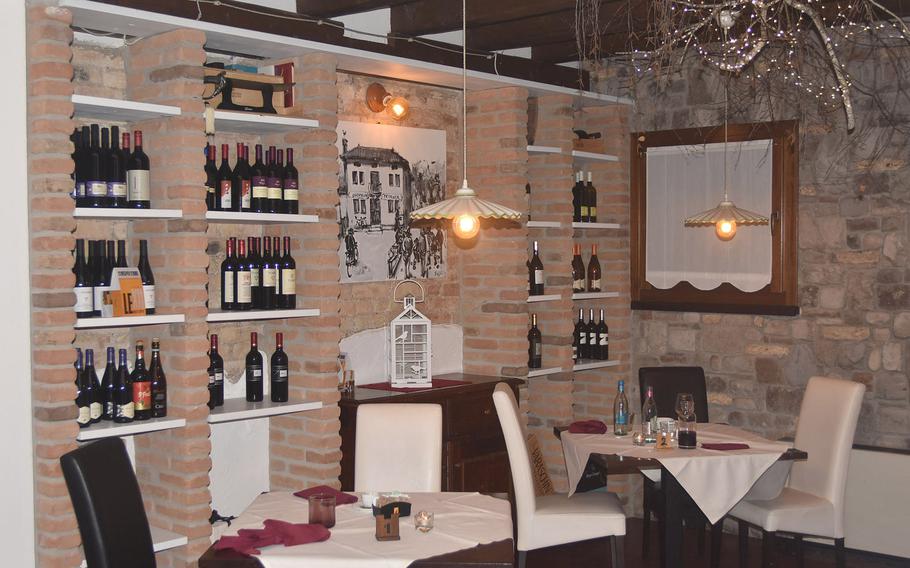 A corner of La Torre features dozens of wine bottles that yours for the drinking for about 20 euros ($25) each. (Kent Harris/Stars and Stripes)

A corner of La Torre features dozens of wine bottles that yours for the drinking for about 20 euros ($25) each. (Kent Harris/Stars and Stripes) 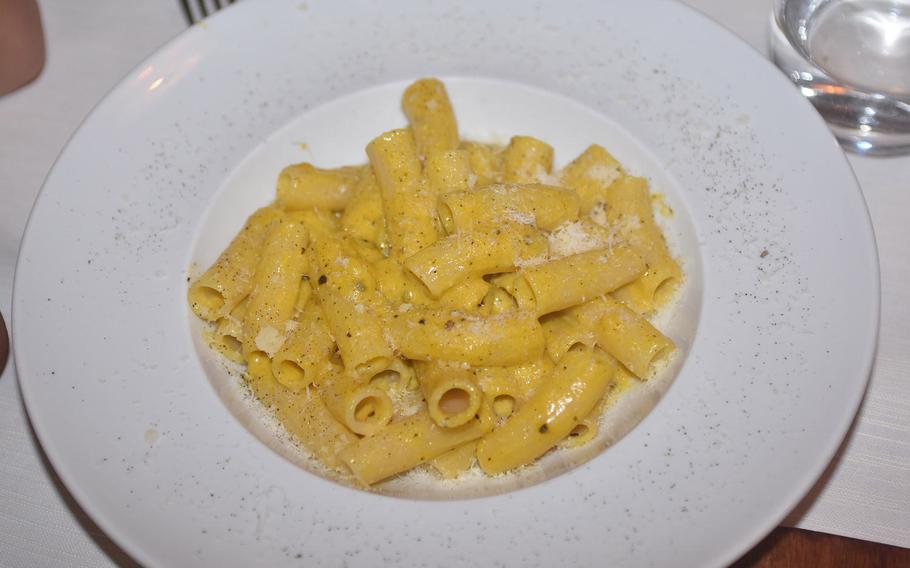 Cacio e pepe (cheese and pepper) is a signature dish in Rome. But it's also on the menu at La Torre, a restaurant/pizzeria on the southeastern outskirts of Pordenone, Italy. (Kent Harris/Stars and Stripes) 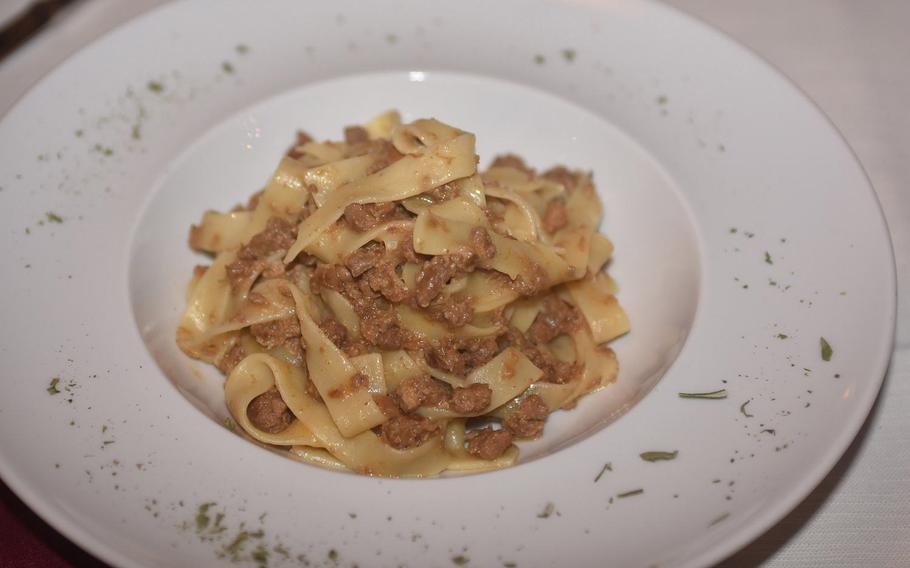 Tagiatelle pasta with a duck sauce was a recent offering at La Torre, a restaurant in Pordenone, Italy, owned by a local who operates the school buses that ferry many American kids from home to school. (Kent Harris/Stars and Stripes) 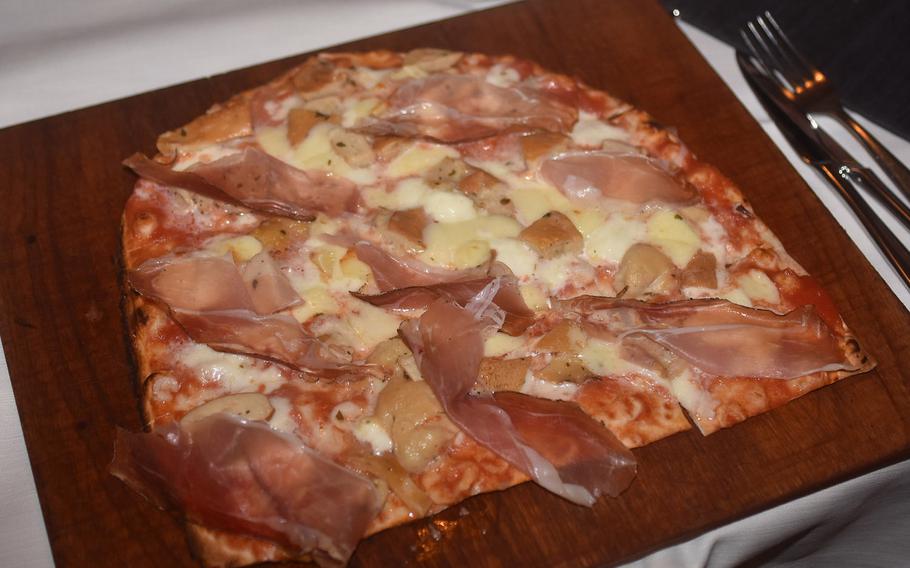 Order a pizza from La Torre in Pordenone, Italy -- there are more than 40 combinations -- and you'll get something a bit different than most Italian pizzerias. The crust is ultra-thin, and it's not made in a circle. (Kent Harris/Stars and Stripes) 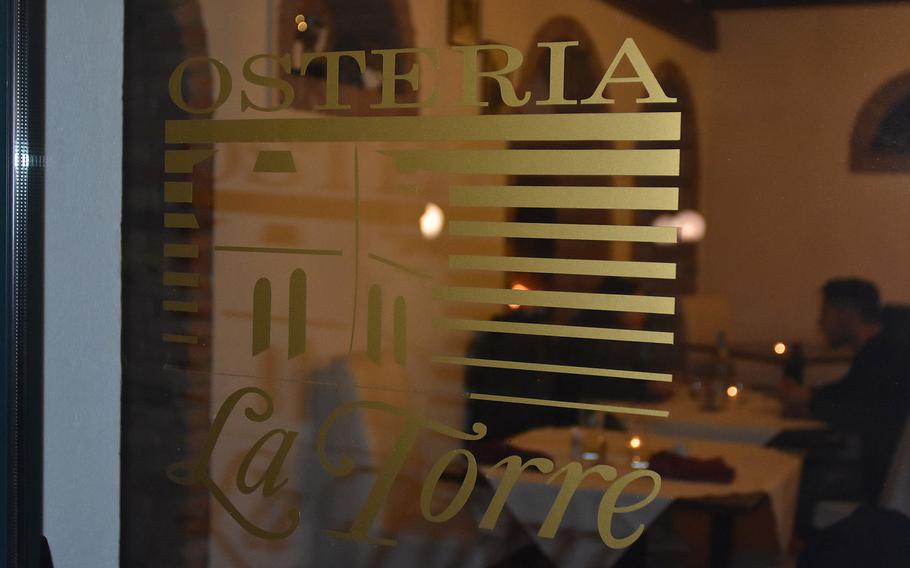 Is it a pizzeria? Is it a ristorante? Is it an osteria? The establishment in Pordenone, Italy, is officially listed as La Torre, Ristorantepizzagourmet. Yes. No spaces. (Kent Harris/Stars and Stripes) 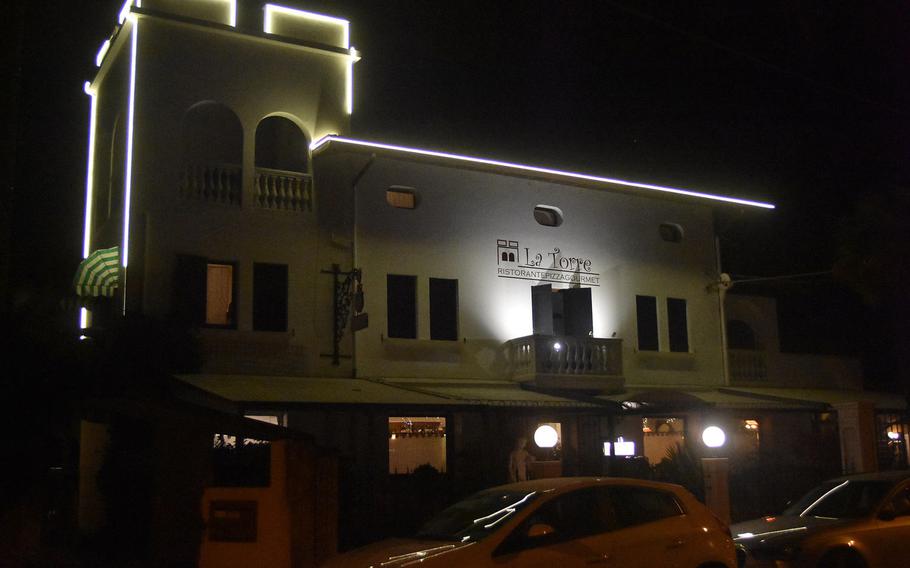 La Torre is a bit isolated in an area souththeast of Pordenone, Italy, that's a bit out of the way for many Americans. But you can see it lit up at night from the nearby highway. (Kent Harris/Stars and Stripes)

It doesn’t take that long for those assigned to Aviano Air Base to get to know their way around the city of Pordenone at least a little bit.

Hundreds of Americans live in the city of about 80,000 people, which is located about 10 minutes south of the base.

But there are areas most Americans don’t get to. Villanova, a suburb on the south side that’s not easily reached by the major roads, is one of them.

Diego Felice, an Italian national who runs a bus company that takes many American schoolchildren to and from school, is familiar with the area. He used to jog and ride his bike and admire the building that housed La Torre’s predecessor. When that owner left the business, he asked Felice if he wanted to run his own restaurant.

Felice did, and so with his sister and brother-in-law, he opened La Torre in June 2016.

It’s attracted some American guests, Felice said, but it’s a bit out of the way. The menu’s in Italian, and other than Felice, not many in the restaurant speak much English.

The pizza — there are more than 40 combinations listed on the menu — is thin and oblong, with squarish pieces.

Because it’s so thin, it can be somewhat difficult to eat. Should you use your hands or a knife and fork?

There’s no such dilemma with the second-course options, an array of Black Angus slices from Australia or Ireland.

“It’s the best,” Felice said of importing the meat from such distances.

The appetizer list is also heavy on meat. There are a handful of pasta options for first courses. And for those who’d like some lamb (from New Zealand, of course), that’s an option among the second courses.

The dessert menu contains another pizza of sorts. This one features Nutella as a topping.

Felice said he’s considered marrying his two enterprises, using his buses to get Americans from the base to his restaurant for special gatherings.

In the meantime, bring the GPS. And an appetite.

Directions: Some GPS units might have trouble finding the place, as there are a number of streets called Villanova. Without one, the easiest way to get there from Aviano is to head to the train station in Pordenone and continue toward the fairgrounds. Instead of turning right at the traffic circle, take a left onto Viale delle Grazie and then right at the circle by the Al Lido restaurant onto Via Mestre. Turn right onto Via Nuova di Corva, then left onto Via Alessandro Manzoni. Take a right after two blocks onto Via Villanova and follow that for a long way. It’ll eventually turn into Frazione Villanova. The restaurant will be on the left. Park on the street. The address is Frazione Villanova 5, Pordenone, Italy.

Hours: Open daily for lunch 11 a.m. to 2:30 p.m. and dinner 6-11 p.m. Closed on Tuesdays and for lunch on Saturdays. Reservations are a good idea, especially on the weekends.

Menu: In Italian. You might have to get translations from the owner, who’s there every night.

Food: Pizza, pasta and lots of meat. There’s an array of second courses featuring Black Angus steaks from Australia and Ireland. Italian and Belgian beers are on tap, and there are several choices of red and white wines.