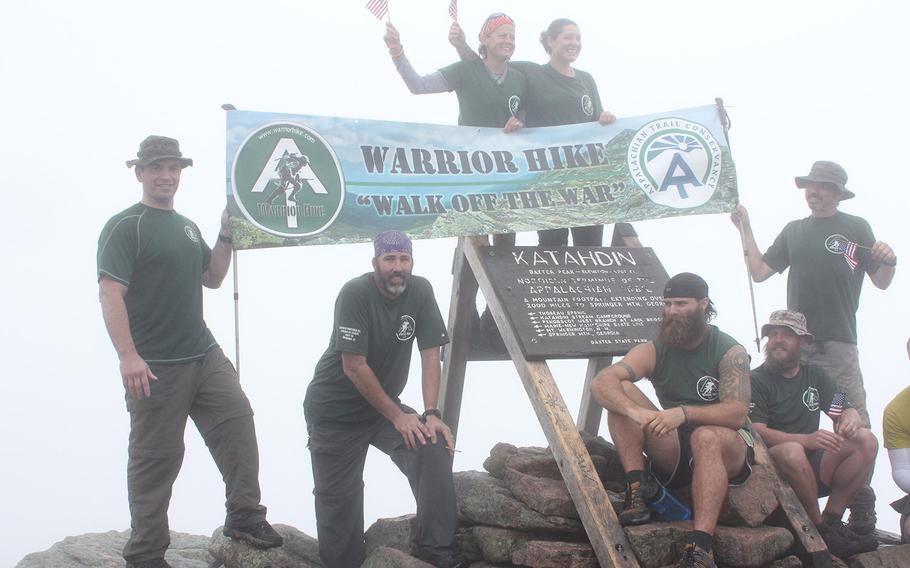 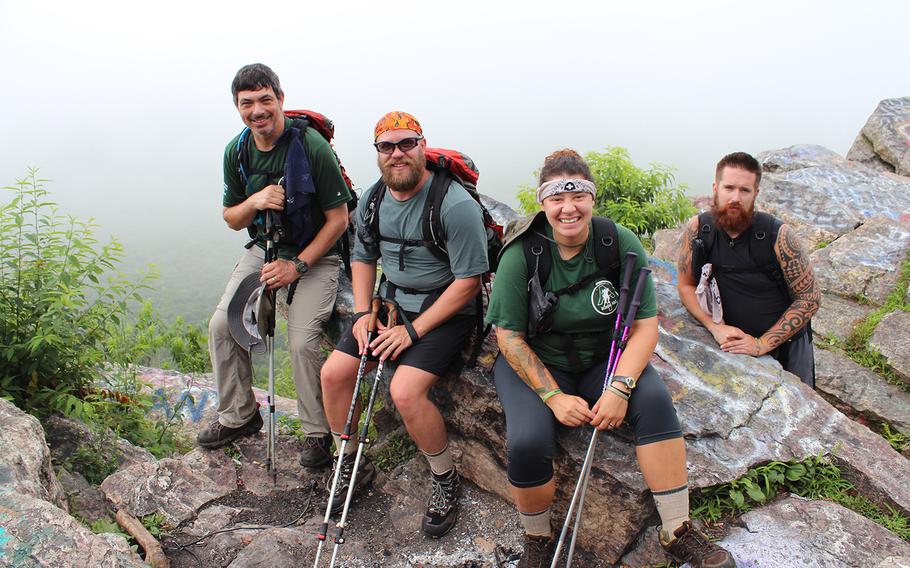 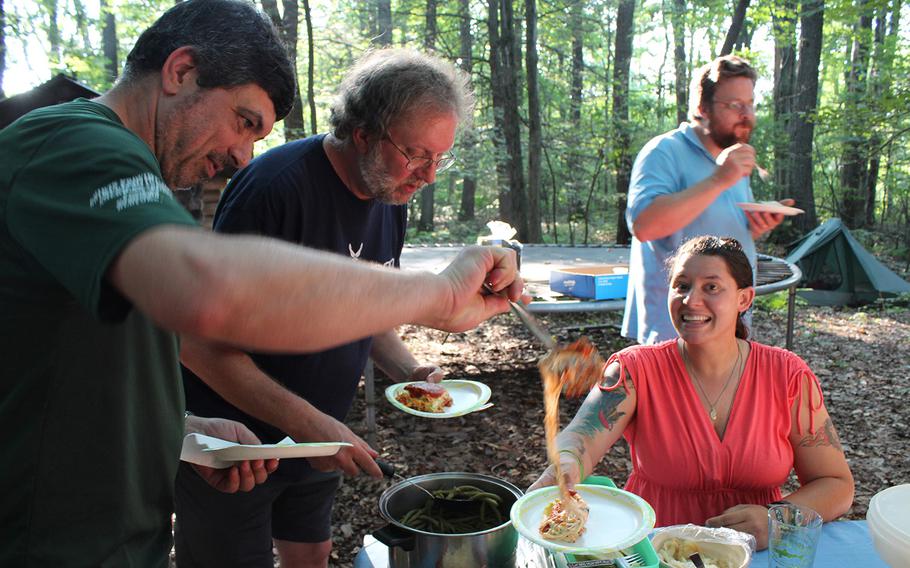 Hiker Rob Carmel, left, Blue Mountain Eagle Hiking Club President Scott Birchman, Matt Holliday of Pennsylvania Magazine and hiker Stephanie Cutts at a cookout, one of many events hosted along the route for the Warrior Hikers. (Courtesy of Cindy Ross)

Retired Marine Corps Staff Sgt. Steve Clendenning saw sinister eyes in the dark forest, following and plotting to harm him as he hiked on the Appalachian Trail. Loud noises startled him — even a tree branch moving from the wind. Dangerous Iraqi men came to him every night in his sleep, pinning him down in an abandoned building and killing him in terrible ways. The night horrors haunted him, even as he lay in his nylon tent along the scenic Appalachian Trail.

Clendenning was following the 2,185-mile trail from Georgia to Maine as a thru-hiker — a long-distance backpacker. He was one of a handful of Warrior Hikers with his sights set on Mount Katahdin in Maine, the northern terminus of the trail, six months after beginning his pilgrimage on Springer Mountain in Georgia. He was walking to get the demons out of his head, calm his post-traumatic stress since returning from war, wean himself off more than a dozen medications and get healthy. He was on a different kind of mission.

Clendenning was deployed in Iraq when a roadside bomb exploded, causing traumatic brain injury and damaging his hearing. He had spent the four years since he retired from the military going to doctor appointments and weekly counseling, and having brain scans. He gained weight and tried to kill himself on the anniversary of his injury, when he lost two friends.

“With everything I was dealing with, I thought hiking the trail would help me,” he said while recovering at the Marine Corps Wounded Warrior Battalion at Camp Lejeune. “When I’m home, I was constantly vigilant. I planned escapes route, I couldn’t go anywhere without thinking, watching. I couldn’t sit in a restaurant with my back to an entrance.

“Out here, I’ve turned all that off.”

Walking off the war

Clendenning was part of the Warrior Hike “Walk Off The War” program that helps veterans transition from military service by thru-hiking the Appalachian Trail. The non-profit Warrior Hike is the brainchild of Marine Corps captains Sean Gobin and Mark Silvers, who hiked all 2,185 miles of the Appalachian Trail last year to support wounded veterans. During their journey, the men organized speaking events at veterans organizations along the way, and raised money to buy adapted vehicles for seriously wounded Afghanistan veterans.

Gobin, who served for 12 years, redesigned the program in 2013 and partnered with the Appalachian Trail Conservancy to create the “Walk Off the War” Program.

He was inspired by World War II vet Earl Shaffer, the first person said to have thru-hiked the trail, who decided to walk the war out of his system. Fourteen veterans were selected to participate. They represented all four military branches, with women and men ages 26 to 50. They received the equipment and supplies required to complete a thru-hike, town support from veterans and hiking organizations along the trail, and assistance with job placement opportunities upon completion of the hike.

Thirty-five events were set up in towns along the trail, coordinated with VFW and American Legion chapters. Their members provided shuttle rides for the warriors, lodging, meals and camaraderie. These events were designed to educate the public about the Appalachian Trail and the Warrior Hikers. Fund-raising was an integral part to ensure that the program will continue.

The hikers connected along the way with older vets who had been in their shoes 40 years ago, and they talked about finding hope again after their service.

Gobin wanted the Warrior Hikers to socialize, forcing them to communicate and interact and learn how to be with regular people again. His rule: You didn’t have to hike as a group, but you needed to attend the events as a group. Gobin did not hike with the group; he joined them for the first week in Georgia, met them again in Virginia, and celebrated their success at the summit of Mount Katahdin in Maine.

The 14 hikers endured the typical long-distance hiking challenges — sore knees, deep snow in the southern mountains, intense heat waves and long rainy stretches. But they also struggled with appendicitis, kidney stones, sprained ankles and the norovirus, all requiring hospital visits. Some Warrior Hikers began to party and had to skip parts of the trail to keep on their schedule. Without someone in charge, some had a difficult time staying focused.

The hikers tried to appoint retired Army SGM Rob Carmel as their leader, but he did not want the role. One of the hardest things for Carmel on this hike was learning how not to be in charge, letting the others hike their own hike.

Carmel joined the Army when he was 18 and put in 32 years, retiring while he was on his thru-hike. He served in Somalia, Kuwait, Iraq and Afghanistan.

“I have always had a title. But I had to learn my own name while I was walking off the war,” he said. “I just wanted to be Rob out here.”

Used to the physical demands of the military, the Warrior Hikers were surprised at how demanding and grueling daily hiking was.

“I think back on many of the climbs I did in the Marine Corps — 25-mile death marches, walking until I thought my feet would fall off, but I did not do it every day like the trail,” Clendenning said. “This is harder.”

Stephanie Cutts left the Navy in 2008 when, at 255 pounds, she failed too many physical readiness tests. Her father had died while she was deployed in the Persian Gulf — she missed the funeral — and she fell into a deep depression. She said she decided to hit the trail to get her life back on track.

“When we all met down in Georgia, I was afraid I would be in the worst shape,” she said. “But everyone had a gut, no one was in shape. ‘Damn right, we’re gonna stick together!’ I was way excited to see those big pot bellies.”

Cutts completed the hike and dropped nearly 60 pounds along the way.

Going on 'for those who couldn't'

The Warriors reached the summit of Mount Katahdin on Sept. 13. Out of the 14 who began, only four remained on the trail for the entire six months. Two Warrior Hikers returned to hike the last 100-Mile Wilderness in Maine and summit Mount Katahdin.

“As we hiked from Georgia to Maine, we came to terms with some of the things that we have seen, experienced or may have had to do,” said Warrior Hiker Lance Cpl. Tom Gathman, who lost fellow Marines during his deployment in Iraq in 2007. “And we had plenty of time to think about those things.”

Clendenning, who was forced off the trail to have his appendix removed, returned for the ending. He said he realized how peaceful and calming it was to be in the woods.

“I might have hurt all day long from hiking up a mountain, but when I got to a lookout and could see forever and reflect on what God has created and the people in my life that I have lost — I have lost more than 30 friends — I realized that I really needed this hike,” he said. “I’m going to live my life for those that couldn’t.”

At the finish line

The Warrior Hikers who officially completed the trip to the northern terminus of the Appalachian Trail: