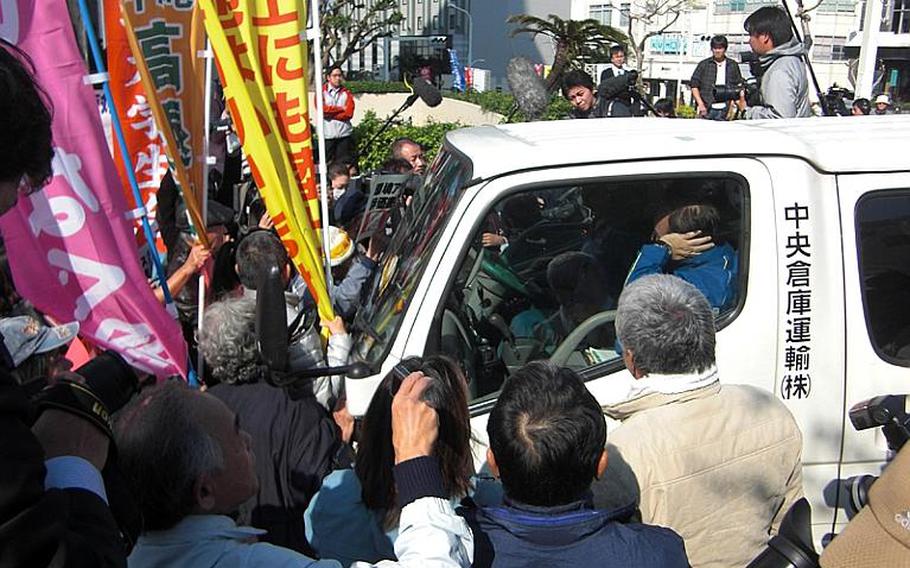 Buy Photo
Protesters opposing a new Marine Corps runway in Henoko, Okinawa, surround a van on Dec. 27, 2011, preventing a delivery of an environmental impact assessment report to Okinawa prefectural government. The report submission is a necessary procedure under Japanese environmental law. Tokyo is moving forward with the construction of V-shaped runway, planned to extend into reclaimed land in Henoko Bay, adjacent to Camp Schwab. (Chiyomi Sumida/Stars and Stripes)

Buy Photo
Protesters opposing a new Marine Corps runway in Henoko, Okinawa, surround a van on Dec. 27, 2011, preventing a delivery of an environmental impact assessment report to Okinawa prefectural government. The report submission is a necessary procedure under Japanese environmental law. Tokyo is moving forward with the construction of V-shaped runway, planned to extend into reclaimed land in Henoko Bay, adjacent to Camp Schwab. (Chiyomi Sumida/Stars and Stripes) Buy Photo
An anti-military activist flashes a card Dec. 27, 2011, that reads "We won't let you deliver an environmental report to Governor." About 100 protesters surround a carrier service van that carries the report at the prefectural government office, sending the vehicle away without making delivery. (Chiyomi Sumida/Stars and Stripes)

CAMP FOSTER, Okinawa &mdash; A scrum of protesters opposed to the U.S. military presence on Okinawa prevented the handover Tuesday of an environmental assessment report that requires comment from the Okinawa governor before Tokyo can move forward with plans to relocate Futenma air station.

Tokyo is submitting the 7,000-page document to the Okinawa government for review as the first concrete step toward breaking ground on a new U.S. air base in a less urban area farther north on the island since the two countries formally agreed to the move in 2006. The environmental assessment report follows years of delays due to Okinawa opposition to the project, which is the keystone of a larger realignment of U.S. forces in Japan and Guam.

Delivering the report is Tokyo&rsquo;s way of making good on a promise to the United States to show progress on the stalled project by the end of the year.

That self-imposed deadline apparently galvanized the anti-military demonstrators, who are determined to prevent delivery until Thursday when government offices shut down for holiday until Jan. 4. Under Japan&rsquo;s environmental assessment law, a hardcopy report must be submitted, along with 19 duplicates, according to an official of the Okinawa government&rsquo;s environmental department.

About 100 protesters thronged around the Nippon Express delivery van, blocking the driver and an associate from removing the reports from the van. A prefecture official at one point met with one of the delivery men amid the crowd. The pair conferred with Nippon Express headquarters via phone, which advised the deliverymen to leave. The standoff lasted about an hour.

&ldquo;It went well today,&rdquo; said protester Takeyoshi Higa. &ldquo;But I don&rsquo;t think the central government will give up, so we have to stay vigilant until tomorrow.&rdquo;

Zenji Shimada, one of the protest&rsquo;s organizers, said he was convinced there would be another delivery attempt on Wednesday. &ldquo;The [Prime Minister Yoshihiko] Noda administration is taking a hard stance only to appease the U.S. government,&rdquo; he said.

Okinawa Gov. Hirokazu Nakaima is required by law to submit his opinions on the assessment to Tokyo within 90 days of receipt. Once Tokyo receives the input, they will revise the report as needed. The report will then be open for public review and opinions before Tokyo asks Nakaima for his permission to reclaim part of Henoko bay to be used as a runway. If Nakaima gives his approval, the construction will start. If he doesn&rsquo;t, Tokyo has to either enact a special law or file a lawsuit.

Nakaima, who was elected after promising to oppose Henoko project, has downplayed the significance of the report&rsquo;s arrival, and the administration declined to comment on the deliverymen being turned away.

&ldquo;This is a decisive moment for Okinawa&rsquo;s future: whether this island can be spared from being a permanent military island,&rdquo; Shimada said.

Masaaki Gabe, professor of international relations and director of the International Institute for Okinawan Studies at the University of the Ryukyus, criticized the Nakaima administration for not taking a clear stance on Tokyo&rsquo;s policy on the base. Rather than telling Tokyo outright that it won&rsquo;t accept the report, he said, the administration has remained passive about the handover.

Gabe also panned the central government for &ldquo;pretending as if this were a mere administrative procedure.&rdquo;

Nakaima has said in the past that the report is unlikely to sway deep opposition to keeping the Marine Corps flight operations on the island and it will be &ldquo;very difficult&rdquo; for the government to actually build a replacement runway facility, even after environmental concerns are addressed.

Under Japanese law, the governor has the authority to approve or deny the offshore reclamation of land needed for the project.

The move will require Japan to build a new V-shaped offshore runway by filling in part of the ocean at Henoko and raise the ground level at the Marine Corps camp.

Stars and Stripes reporter Travis Tritten contributed to this story.