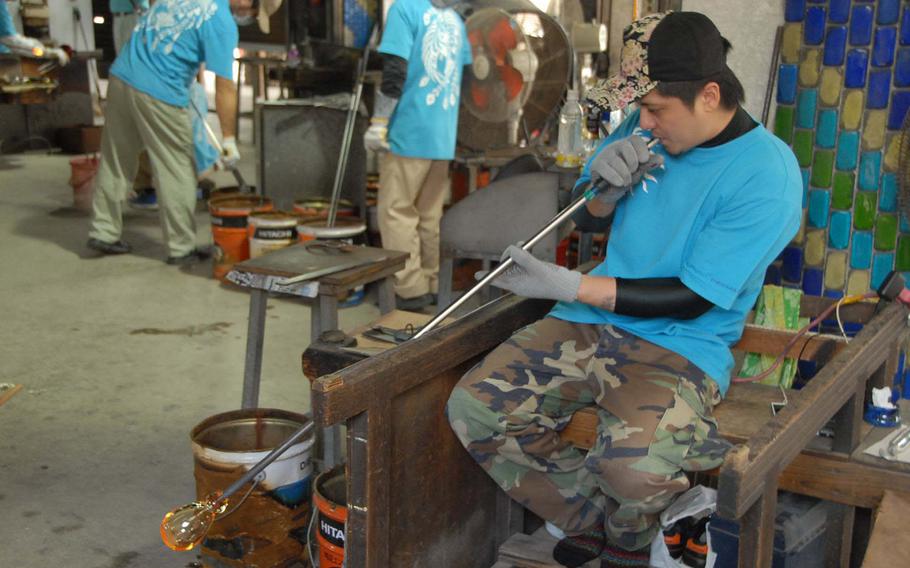 A blower works on a new piece near the kilm at Ryukyu Glass Craft on Okinawa. (Travis J. Tritten/Stars and Stripes)

A blower works on a new piece near the kilm at Ryukyu Glass Craft on Okinawa. (Travis J. Tritten/Stars and Stripes) 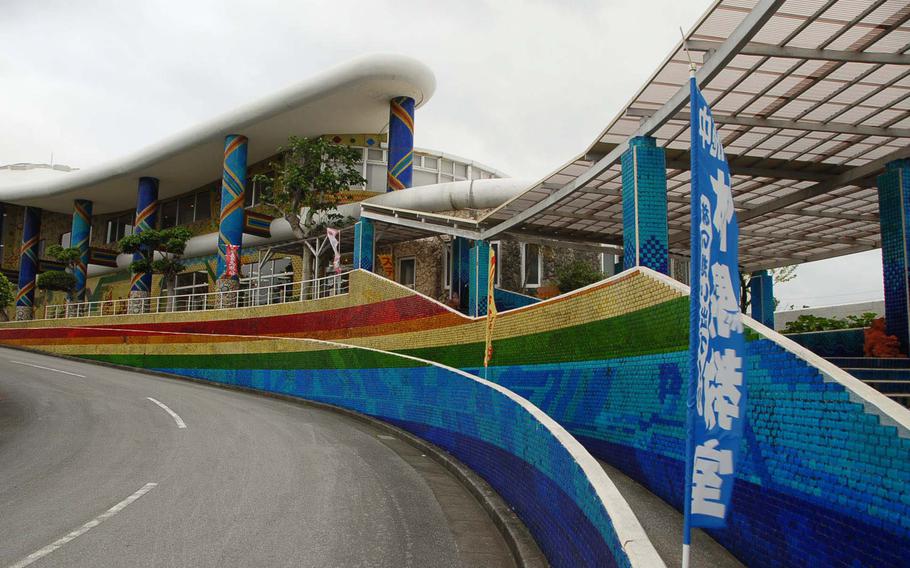 Visitors to Okinawa's largest glass factory can buy a range of glass products from its outlet shop. (Travis J. Tritten/Stars and Stripes) 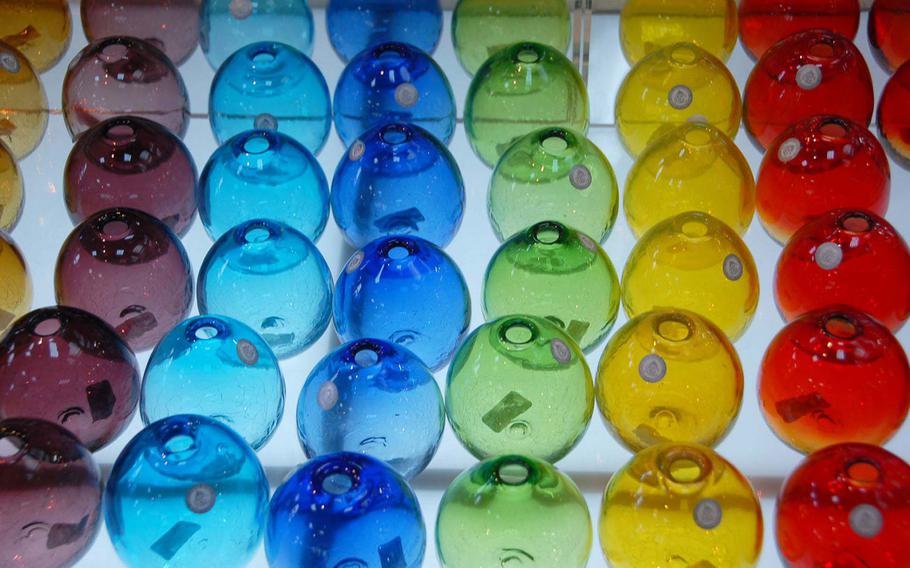 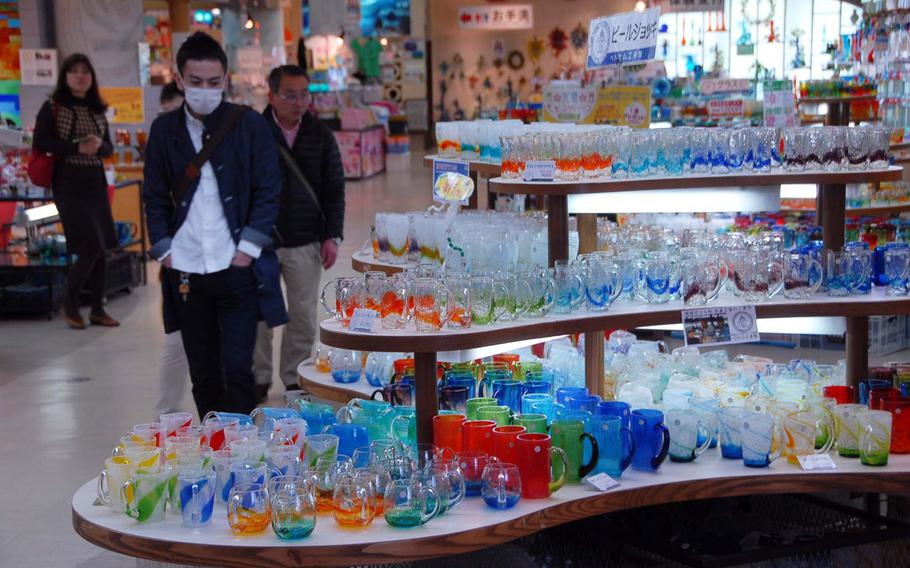 Glass made on site and at a sister factory in Vietnam are for sale at Ryukyu Glass Craft in southern Okinawa. (Travis J. Tritten/Stars and Stripes) 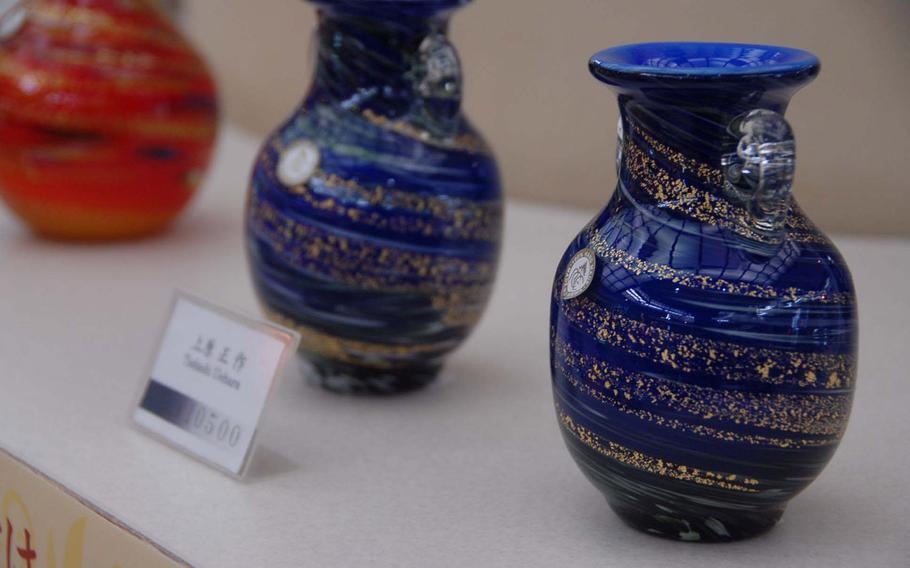 A small vase made on Okinawa costs the equivalent of about $100. (Travis J. Tritten/Stars and Stripes) 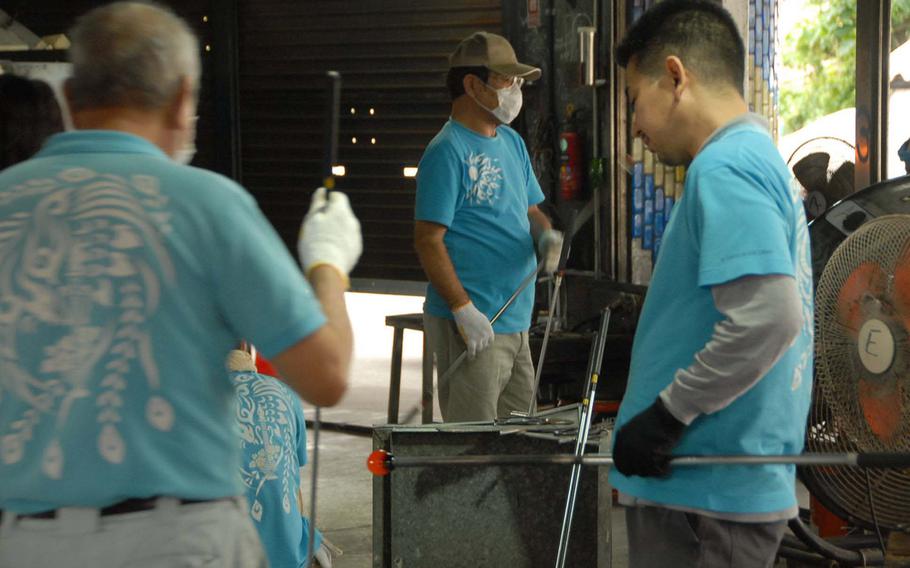 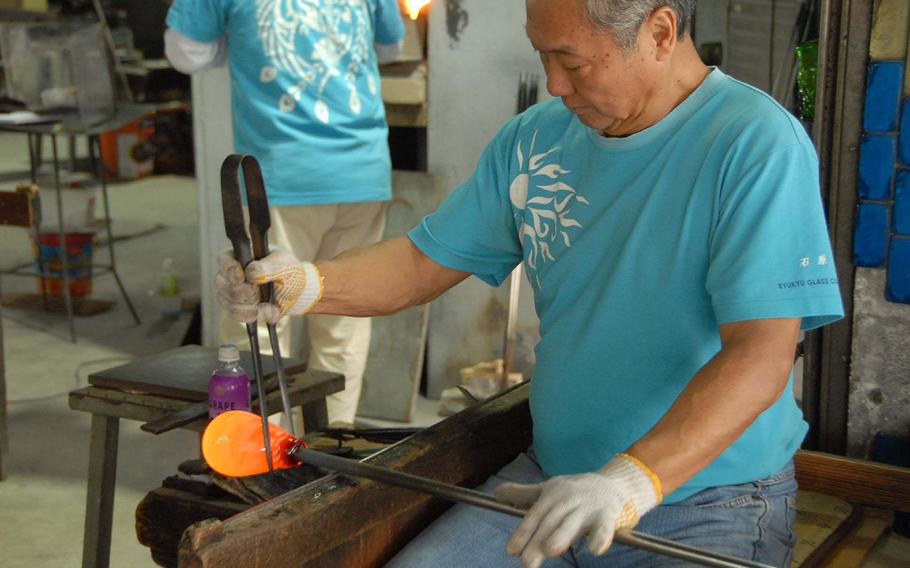 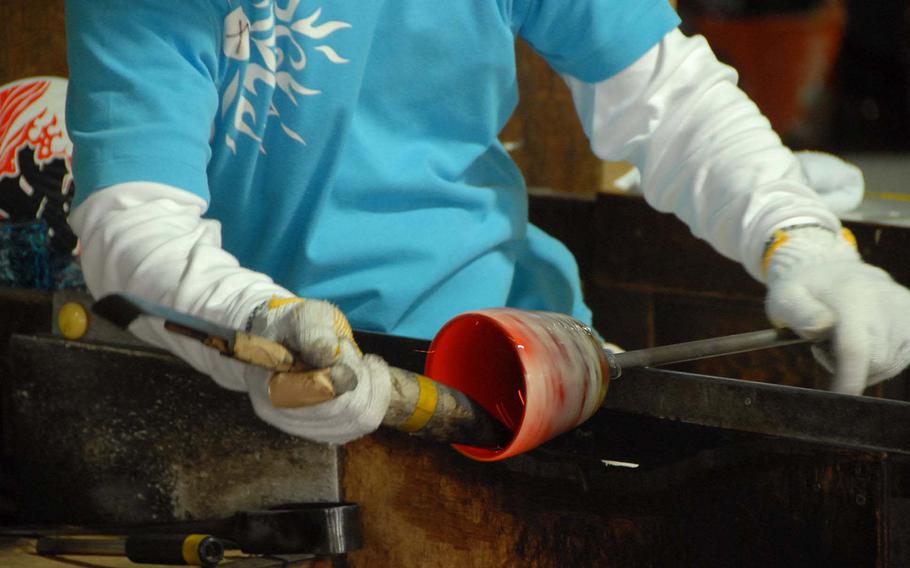 A glass cup is meticulously formed at the Ryukyu Glass Craft factory on Okinawa. (Travis J. Tritten/Stars and Stripes) 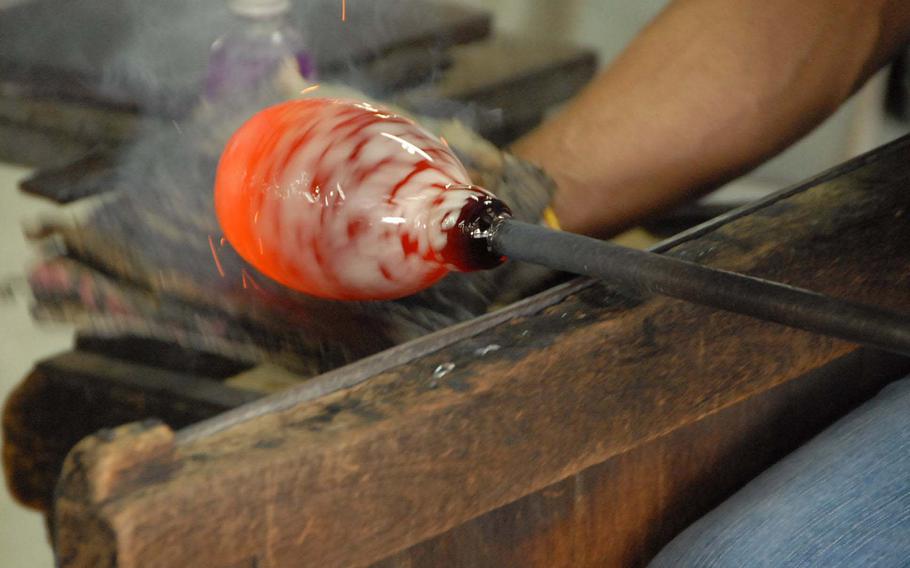 Sparks fly as a piece of molten glass is spun into shape by a Ryukyu Glass Craft worker. (Travis J. Tritten/Stars and Stripes) 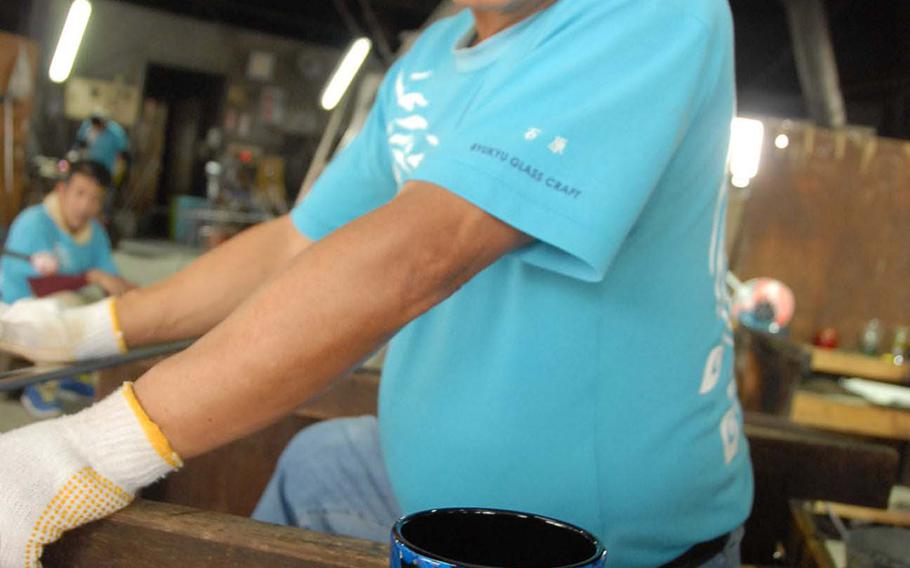 A finished glass sits on the bench of a factory worker at the Ryukyu Glass Craft factory on Okinawa. (Travis J. Tritten/Stars and Stripes) 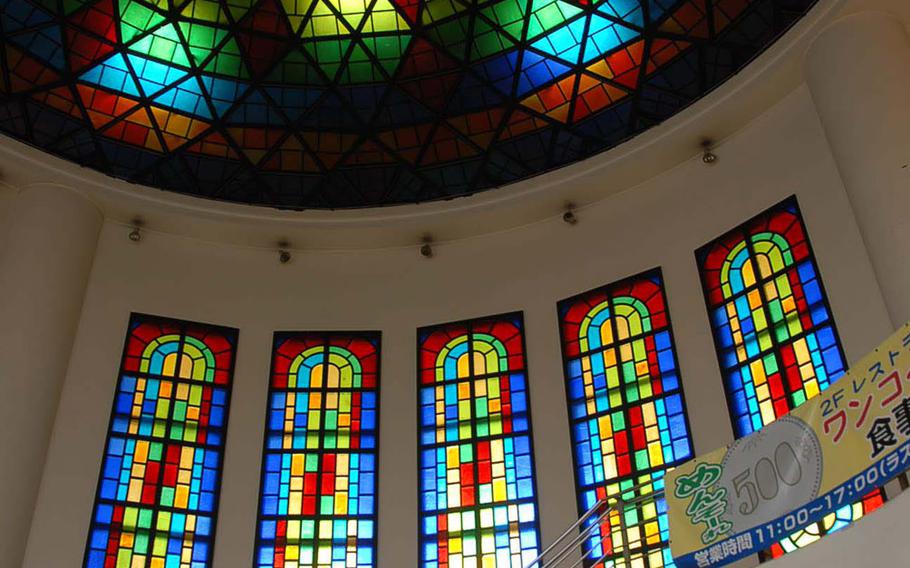 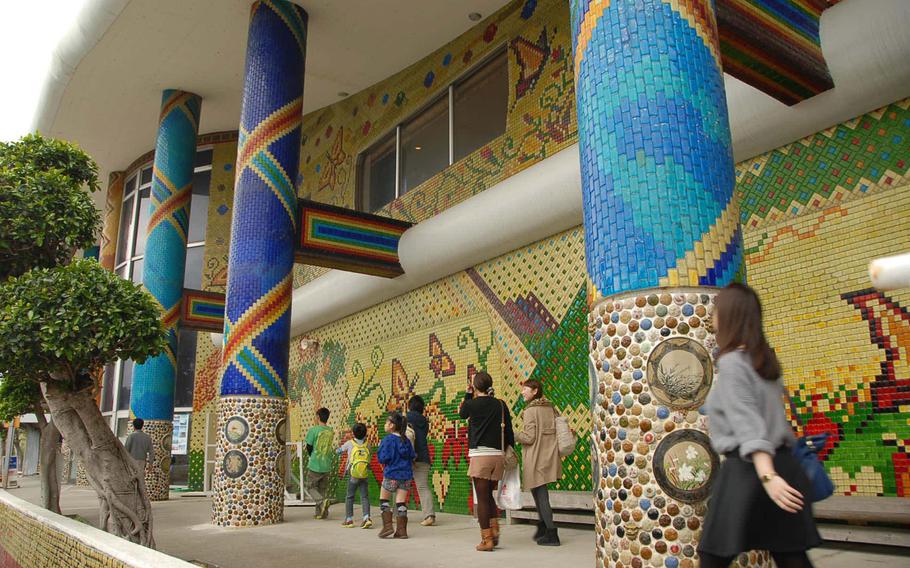 Like many things on Okinawa, the story of glass craft is a story of war, hardship and rebirth.

The island and its manufacturing — including a small number of glass makers — were devastated during World War II. Most Okinawans were either displaced or killed in the fighting.

The craftspeople who returned to rebuild often found little more than rubble and were forced to make use of whatever materials were available. Glass was needed in the recovery effort.

As the stories go, Okinawans began collecting the bottles discarded by occupying U.S. troops. Some say it was Coca-Cola bottles tossed from ships, though it’s just as likely the island’s large number of military bases also produced a steady stream of cast-off glass containers.

The bottles were melted down and re-blown into a unique type of recycled glassware. Locally made glass caught on quickly with U.S. servicemembers, who bought them as shipboard storage containers or souvenirs and supplied an economic base for the new industry.

Since the war, the Okinawan art of glass-making — once a grim wartime necessity — has been refined and has blossomed into one of the island’s proudest traditions. The local craft now attracts interest among visitors from across Asia and the world with exceptionally skilled pieces selling for thousands of dollars.

Ryukyu Glass Craft in the southern community of Itoman is the largest glass producer on the island.

Visits to the factory are free and offer a front-row seat for anybody interested in the craftwork.

The public can gather around the kiln area as the factory craftsmen use long metal pipes to blow and fashion glowing lumps of molten glass. Sparks fly as they use rags to shape the spinning vases, cups and bowls. The process of creating multi-colored, patterned glass can be mesmerizing.

The adjacent museum is a showcase of the best of Okinawa glass-making (unfortunately, no photography is allowed inside the museum).

Among the displays is a sanshin, a kind of Okinawan banjo, made entirely from delicate blown glass and a series of exquisite master-crafted vases that resemble flowers and sealife. Clear glass storage containers originally made for U.S. troops are also on display.

Next door to the factory, a wide variety of glassware is for sale — and prices range dramatically.

Locally made pieces fetch a premium but Ryukyu Glass Craft also imports less expensive pieces in the same local style from a sister factory in Vietnam.

Simple drinking glasses from either factory can be had for less than $10, though anyone hoping to buy a fancier example of Okinawan glass craft should expect to pay much more. Even small local vases with patterned glass can cost over $100.

Still, it may be a fair price to pay for a hand-crafted piece of local history, judging by the visitors and interest in the island factory. After all, the pieces of colored glass are part of a quintessential Okinawan comeback story.

Directions: From Camp Foster and Kadena Air Base, take the Okinawa Expressway south to the Tomigusuku exit toward the airport. After the expressway ends, take a left turn onto the Route 331 bypass. Follow 331 past Itoman city hall on the right and then the Nanbu hospital on the left. Look for the glass-tile-covered Ryukyu Glass Craft factory; it will be on the right side.

Food: The factory offers an Okinawan food restaurant that is open from 11 a.m. to 5 p.m.