Buy Photo
Akai Helmet, which means "Red Helmet" in Japanese, is a baseball-themed izakaya in Okinawa City that is dedicated to the Hiroshima Toyo Carp of the Nippon Professional Baseball league. (Matthew M. Burke/Stars and Stripes)

Buy Photo
Akai Helmet, which means "Red Helmet" in Japanese, is a baseball-themed izakaya in Okinawa City that is dedicated to the Hiroshima Toyo Carp of the Nippon Professional Baseball league. (Matthew M. Burke/Stars and Stripes) 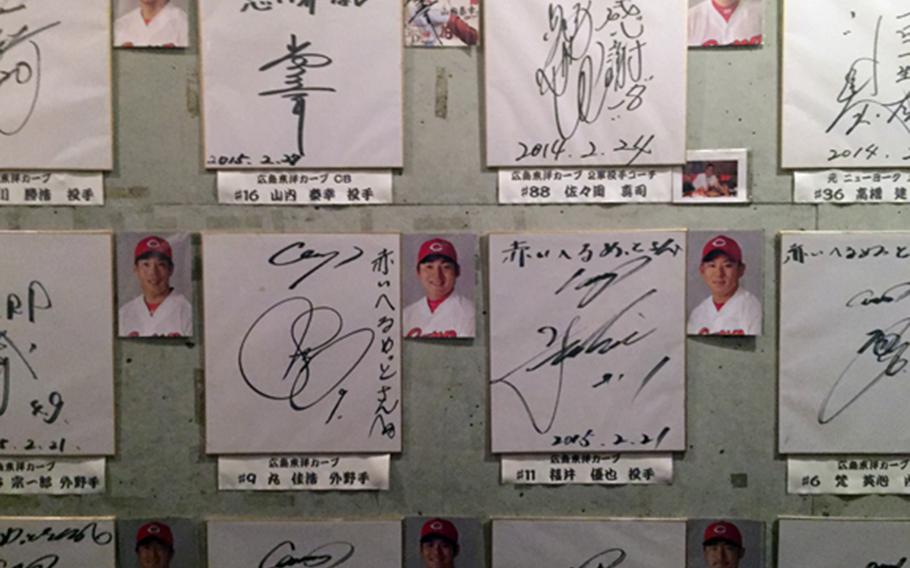 Buy Photo
Signatures from Hiroshima Toyo Carp players who have visited Akai Helmet over the years decorate the izakaya, inside and out. (Matthew M. Burke/Stars and Stripes) Buy Photo
The pork and bean sprout chan-chan yaki at Okinawa City's Akai Helmet izakaya was another sweet and tangy standout from the menu. (Matthew M. Burke/Stars and Stripes) 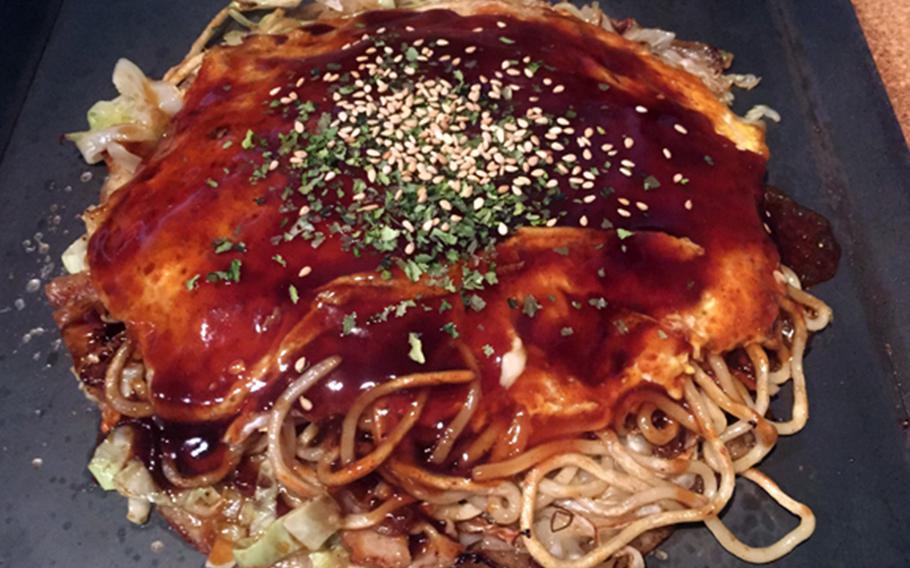 Buy Photo
The Hiroshima-style okonomiyaki is the real star of the show at Okinawa City's Akai Helmet izakaya. (Matthew M. Burke/Stars and Stripes)

Tucked away in a sleepy residential neighborhood in Okinawa City is Akai Helmet, a spacious and trendy traditional Japanese izakaya opened in honor of the Hiroshima Carp, one of the most popular teams in Nippon Professional Baseball. The restaurant’s name, which translates to “Red Helmet,” is a direct reference to the team’s colors and the headgear sported by players during their appearances at bat.

Although located more than 600 miles from the Carp’s hometown, Akai Helmet’s baseball theme isn’t entirely out of left field. The team has held spring training on Okinawa since 1982, and as a result has a large local following on the island. According to Akai Helmet’s staff, the izakaya is even a regular hangout for Carp players during the winter months.

Once inside, diners are led past player autographs covering nearly every bit of restaurant — walls, balls, pictures and signs. A red samurai suit of armor stands watch over the cash register, the iconic Carp “C” adorning its helmet.

The restaurant’s menu is entirely Japanese, which might be difficult for some English-speaking patrons — so be prepared to come armed with a smartphone app or a friend to help to translate.

Akai Helmet serves up a variety of regional delicacies from across Japan, all designed for family-style sharing. A variety of appetizers and salads — include kimchi, Japanese pickles and edamame — range in price from 300 yen (about $2.60) to 700 yen. I tried the Caesar salad (700 yen), which comes topped large chunks of bacon, an egg and shredded cheese. It wasn’t spectacular, but it was still as good as any other to be found on the island.

Fried items, like Japanese-style fried chicken, known as karaage (480 yen), and fried prawns (750 yen) are also available. The karaage was perfectly crispy on the outside while succulent on the inside, and also came with a small salad topped with carrot dressing.

If you want to watch the chefs craft this iconic dish, ask for seating at the bar for a front-row view of the action.

Akai Helmet’s okonomiyaki is massive and delivered to the table sizzling on a skillet. I chose Hiroshima-style noodles for my okonomiyaki, which had a crunchy exterior and came filled with vegetables. The dish was topped with a traditional tangy okonomiyaki sauce. The taste of the okonomiyaki was average overall, which probably says a lot about its quality.

The highlight of my meal at Akai Helmet was the pork and bean sprout chan-chan yaki (580 yen) — a sweet and tangy hot pot-style dish featuring vegetables and meat topped with miso sauce that’s a staple of Japan’s northernmost island of Hokkaido. The restaurant serves a few other varieties of chan-chan yaki as well, including chicken (600 yen), skirt steak (980 yen) and oyster (900 yen).

With all the food on offer, diners are bound to get thirsty. Akai Helmet’s drink selection contains a wide variety of alcoholic beverages, such as draft beer (380 yen) or awamori (upwards of 900 yen), Okinawa’s famous local liquor. Non-alcoholic drinks (400 yen and up) are also available.

Akai Helmet’s tasty and affordable fare, served up in a comfortable and welcoming environment, offers the perfect opportunity to try a wide assortment of Japanese regional cuisine not normally found in Okinawa. At the end of your meal, perhaps you too will be singing the praises of Akai Helmet with a rousing rendition of the Hiroshima Carp’s fight song: “Carpu! Carpu! Carpu! Hiroshima! Hiroshima Carpu!”

COST: Small menu items start at 300 yen (about $2.50), while larger dishes such as the restaurant's signature okonomiyaki, are 700 yen and up.