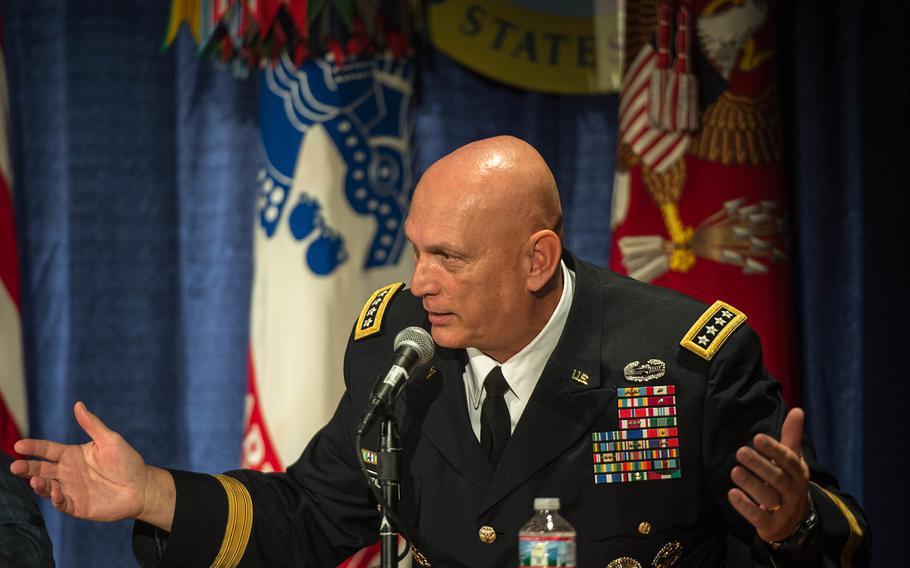 U.S. Army Chief of Staff Gen. Ray Odierno addresses a question from the media during a news conference at the 2014 Association of the United States Army (AUSA) annual convention and exposition in Washington on Oct. 13, 2014. (Mikki L. Sprenkle/U.S. Army)

Sudden crises ranging from the collapse of the Iraqi military to Russian aggression in Ukraine to a record Ebola outbreak in West Africa — as well as operations elsewhere — have the Army scrambling on six continents.

Yet the service is taking on a bewildering range of new jobs amid falling end-strength numbers, decreased training and readiness and a lack of investment in new weaponry and equipment, Odierno told an audience at the Association of the U.S. Army meeting and exposition in Washington.

“We are witnessing firsthand mistaken assumptions about the number, duration, location and size of future force conflicts, and the need to conduct post-stability operations,” he said. “These miscalculations translate directly into increased military risk.

“And frankly as I stand here, military risk is accumulating exponentially.”

The Army in 2012 announced plans to drop to an active-duty force of 490,000 troops in the wake of Middle Eastern conflicts ending, down from 570,000 troops at the height of the Iraq and Afghanistan wars.

Then, staring down the barrel of massive sequestration budget cuts, the Army early this year declared it could carry out the nation’s new Asia-focused national defense strategy with just 450,000 troops.

But that won’t cut it anymore, and the Army now likely needs at least 490,000 troops, Odierno told the press on Monday. New investments in equipment and training are needed too, he said.

“The problem is since we made those statements, the world is changing in front of us,” Odierno said.

The pace is increasingly severe, he said. Most of the Army’s division headquarters are deployed around the world, including a staff deploying to Liberia to coordinate up to 4,000 soldiers sent to provide engineering and logistics expertise in a fight to suppress an Ebola outbreak.

Another is heading to Iraq, where U.S. soldiers are returning to advise Iraqi forces in a fight against Islamic State militants, who have overrun much of the country.

The Army’s new operating concept, rolled out at the AUSA exposition this week, defines the service’s task in the coming decade in the title: “Win in a Complex World.”

“Today as I stand here, with seven of our 10 army division headquarters currently deployed around the globe, providing critical command and control and synchronizing with our allies … it sounds like we’re setting the foundation now for the future operating concept,” he said.