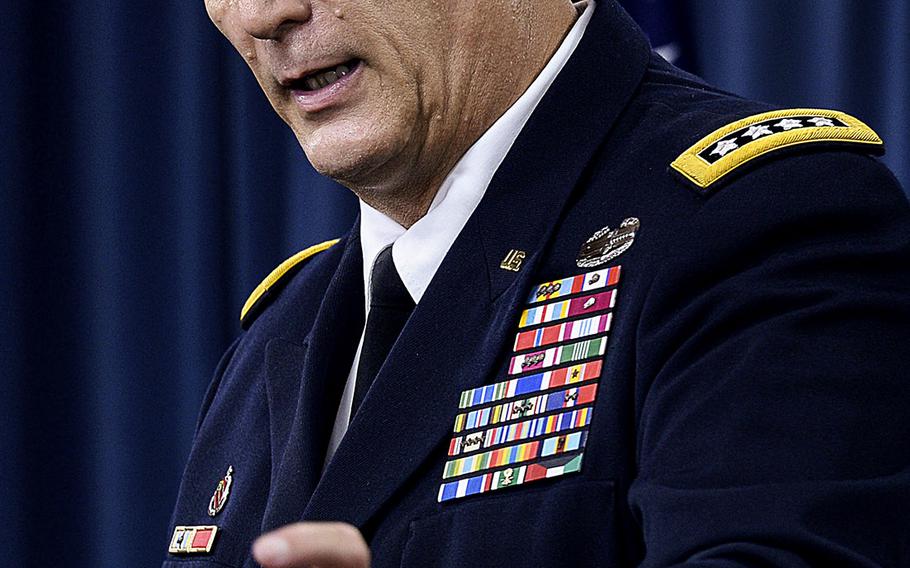 WASHINGTON – The U.S. should consider embedding American servicemembers in Iraqi Security Forces units battling the Islamic State to help them gain momentum in their ground fight against the militant group, the Army’s top general said Wednesday.

Gen. Raymond Odierno, the Army’s 38th chief of staff who will retire after relinquishing his job to Gen. Mark Milley on Friday, said that wouldn’t necessarily mean U.S. troops would be directly fighting, but they could serve as direct advisers as Iraqi units move on the battlefield.

“If we find in the next several months we’re not making the progress that we have, we should probably absolutely consider embedding some soldiers and see if that will make a difference,” Odierno said during the final press briefing of his 39-year Army career. “It’s an option we should present to the president when the time is right.”

There are more than 2,900 U.S. soldiers serving in Iraq and other areas of the Middle East in support of the Combined Joint Task Force-Operation Inherent Resolve, the multinational coalition fighting the Islamic State in Iraq and Syria. The American troops in Iraq serve as advisors, but do not operate on the battlefield. Instead, the operation relies heavily on the U.S.-trained ISF, Kurdish fighters and moderate Syrian rebels fighting on the ground and supported by U.S. airstrikes. The Pentagon announced Wednesday that the U.S. has begun conducting manned airstrikes from Incirlik Air Base, Turkey, against the Islamic State.

The $500 million U.S. program that aims to train and equip 15,000 vetted Syrian fighters each year has come under scrutiny recently after it produced only 54 graduates out of 7,000 volunteers. Some of the 54 of the so-called New Syrian Forces were killed or captured by the al-Qaida linked Nusra Front in a recent attack. Officials have said hundreds more fighters are in the training pipeline.

Despite the setbacks, Odierno agreed with a statement made last week by U.S. Central Command that the fledgling program should move forward.

Although the train and equip program “hasn’t gone as well as we’d like it to, I think it’s important to train Syrian rebels because we want … our enemy to have to respond to several different fronts,” Odierno said. “In my opinion, we want to develop capabilities so we have Iraqi Security Forces (battling the Islamic State) from the south, we have Kurds from the north and we have Syrian rebels in Syria pushing from the west.”

About a year into the Inherent Resolve campaign, the battle against the Islamic State is “kind of a stalemate,” he said.

While the Pentagon estimates that the Islamic State has about 20,000 to 30,000 fighters – just as it did a year ago – Odierno said many of its top commanders have been eliminated, weakening the group. The militants rely heavily on recruiting via social media to replace the fighters that are killed in battle.

“I think that ISIL has been blunted somewhat; they’ve not made any progress since we started airstrikes,” he said Wednesday, largely crediting Kurdish forces for their prolonged success in pushing the militant group out of territory it had seized in Syria and Iraq.

Odierno has extensive knowledge of Iraq, having served a total of more than four years in the country, including as the commander of Multi-National Force-Iraq from September 2008 to September 2010.

He largely blamed the U.S.’s quick exit in 2011 – based on a 2008 agreement to turn over the country’s security to its own government – for the current state of Iraq. When the U.S. left, Odierno said, violence was down and the economy was growing. Political divides within the country’s government and military, he said, made it easy for a group like the Islamic State to successfully push out Iraqi forces and control key cities.

The U.S. military – which Odierno said could defeat the Islamic State with its own ground forces – is not the long-term solution to the issues in Iraq and Afghanistan, he said.

“We’d be right back where we are today six months later,” he said, adding that the region must change politically and economically to achieve lasting peace.