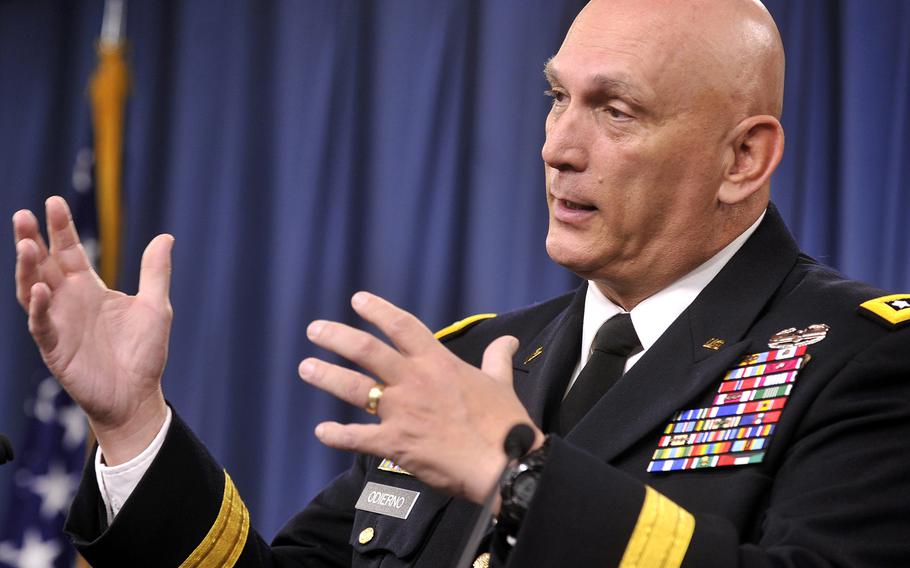 Chief of Staff of the Army Gen. Raymond T. Odierno addresses the media in the Pentagon Press Briefing Room May 15, 2012. Odierno discussed future changes in the structure and size of the Army including the expansion of the roles of women in combat forces. (DoD Photo By Glenn Fawcett)(Released) (Glenn Fawcett/DOD file photo)

WASHINGTON – Defense budget chaos and bad assumptions about the future of American warfare could result in an Army that’s too small to do its job, Army Chief of Staff Gen. Ray Odierno said Wednesday.

The Army is reducing toward an active-duty end strength of 490,000 troops by 2017, Odierno told an audience at the Atlantic Council, a Washington think tank. If Congress doesn’t come up with a solution to sequestration – automatic budget cuts that will reduce planned defense spending by $500 billion over a decade – the Army must shrink even further, he said.

As the United States implements a new defense strategy that de-emphasizes land wars in the Middle East and increasingly casts an eye on the watery expanses of the Pacific, Odierno warned against the assumption that United States has sworn off land wars for good.

“The thing I worry about is that in everybody’s declaration that there’s going to be no more ground wars, we need no more ground forces, that we’re going to make the Army too small,” he said. “I see nothing on the horizon yet that tells me that we don’t need ground forces.”

Keeping a healthy-size Army is doubly important now that some U.S. allies are shrinking their ground forces or considering it, he said. Some of the support the United States has relied on in recent conflicts may not be there if needed in the near future, he said.

“The concerning thing for me is they are significantly reducing their capabilities while we are reducing ours,” Odierno said.

South Korea may reduce its military because of demographic pressures, France and Italy may be forced to do so by budgetary concerns, and Britain is cutting its forces now, he told the audience.

“In a lot of ways, they’re depending on us, especially our ground capability, into the future,” he said.

Although U.S. cutbacks in Europe have resulted in the withdrawal of about 12,000 soldiers, he said, the current Army presence there – with two combat brigades plus logistics and support elements – is “about the right amount.”

Odierno said he joins those who hope for an end to land wars – but not those who suspect the United States no longer needs a large Army capable of fighting them.

“In order for us to deter our adversaries and have the right capacity to protect this nation, you’ve got to have the right number of ground forces,” he declared.