Obama nominates Chuck Hagel as next secretary of defense 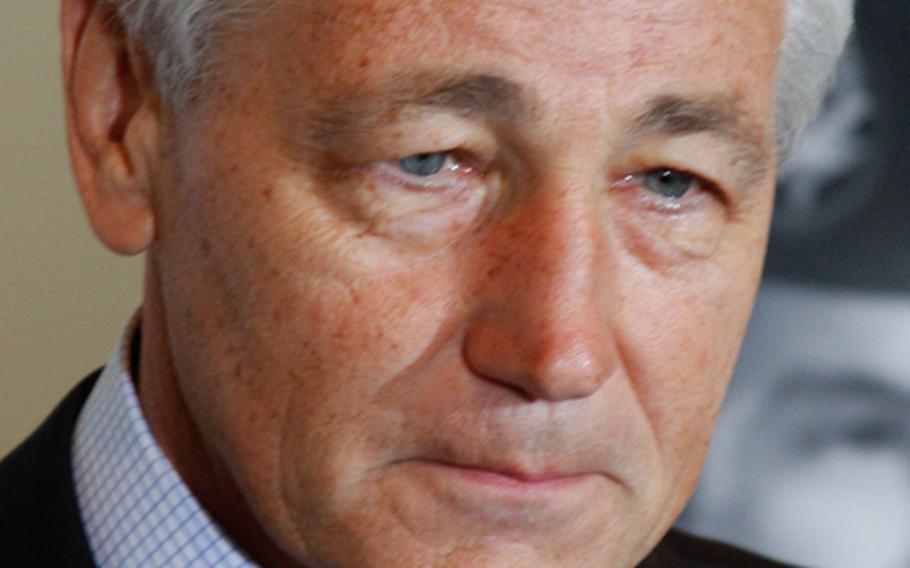 WASHINGTON &ndash; In 1967, Chuck Hagel volunteered to serve in the Army, trained as an infantryman, and was slated to go to Germany to test the first shoulder-fired heat seeking missile. Instead, he asked to go to Vietnam.

&ldquo;Sure, I was scared like everybody else, but I -- I saw it, first of all, as a sense of responsibility, purpose, patriotism. I was glad I was there,&rdquo; Hagel said in a 2002 Veterans History Project interview.

Hagel, the former U.S. senator nominated Monday by President Barack Obama to become the next secretary of defense, could become the first enlisted soldier and Vietnam veteran to serve in that position.

&ldquo;Chuck Hagel is the leader that our troops deserve,&rdquo; Obama said Monday. &ldquo;He is an American patriot. &hellip; To this day, Chuck bears the scars and shrapnel of the battles he&rsquo;s fought in our name.&rdquo;

But his path to confirmation by his former Senate colleagues is not likely to be smooth.

Though the Republican, 66, has powerful fans &ndash; including former national security advisers, retired general officers and ambassadors, he has also faced harsh criticism in recent weeks, mostly centering on comments he made in 2006 about the pro-Israel lobby and in 1998 about a man Bill Clinton had nominated to be ambassador to Luxembourg. He called the man &ldquo;openly, aggressively gay&rdquo; and said he should not represent the values of the United States; he has since apologized.

Clyde Prestowitz, founder and president of the Economic Strategy Institute, a non-partisan think tank in Washington, said he was appalled by many of the attacks on Hagel, particularly those from the pro-Israel lobby.

&ldquo;For me, the thing people need to know is this guy&rsquo;s a straight shooter. What you see is what you get,&rdquo; said Prestowitz, who has known Hagel since 1996. &ldquo;His approach to foreign policy is very much what is good for the average American, how these policies (are) going to play for the man on the street. And I think that&rsquo;s key.&rdquo;

Ending the war in Afghanistan, &ldquo;caring for those who have borne the battle,&rdquo; and &ldquo;continuing to ensure that our men and women in uniform can serve the country they love, no matter who they love,&rdquo; are just a few of the responsibilities the next secretary of defense will face, Obama said.

Hagel is a champion of troops, veterans and families, Obama said, and servicemembers know that.

&ldquo;Chuck knows that war is not an abstraction. He understands that sending young Americans to fight and bleed in the dirt and mud, that&rsquo;s something we only do when it&rsquo;s absolutely necessary,&rdquo; Obama said.

Hagel&rsquo;s father was a World War II veteran, his grandfather a World War I veteran. Growing up in a small town in Nebraska in the 1950s, he told HBO History Makers in 2011 that patriotism was a given: &ldquo;It was part of your life. It was part of the community.&rdquo;

Hagel and his brother Tom volunteered for the Army. Chuck Hagel arrived on Dec. 4, 1967, and about six weeks later the brothers were serving side by side in the same infantry squad &ndash; the only siblings to do so in the Vietnam War.

In March 1968, they were on ambush patrol, Chuck Hagel told the Library of Congress as part of the Veterans History Project.

The squad was crossing a stream when a man in front hit a tripwire. Chuck was hit in the chest with shrapnel, while Tom got shrapnel in his arms. Tom wrapped bandages around Chuck&rsquo;s chest to stop the bleeding. Later that night, when the brothers were leading the unit out, they nearly hit another booby trap.

Tom spotted a live hand grenade and was able to defuse it, saving his brother. The two spent a few days in a field hospital and returned to battle.

Less than a month later, the brothers were leaving a village when their armored personnel carrier &ndash; called a track &ndash; hit a 500-pound mine. The track was blown sideways and fire ripped through it, Hagel recalled in his interview with the Library of Congress.

The fire burned Hagel&rsquo;s left side, his face and arms, but Tom was knocked unconscious and had blood running out of his ears and nose. Hagel pulled his brother out of the track, not sure if he was still alive.

&ldquo;I remember sitting on that track &hellip; waiting for the dust-off to come and medical evaluation, and thinking to myself, you know, if I ever get out of all of this, I am going to do everything I can to assure that war is the last resort that we, a nation, a people, calls upon to settle a dispute. The horror of it, the pain of it, the suffering of it. People just don&rsquo;t understand it unless they&rsquo;ve been through it. There&rsquo;s no glory, only suffering in war,&rdquo; he said.

Tom lived, and both brothers were back on patrol within about a week or so. But the memories stayed with Hagel, even as he was elected to the U.S. Senate in 1996.

And it is Hagel&rsquo;s experience as a grunt that makes him a perfect candidate for secretary of defense, Prestowitz said.

&ldquo;He knows what it&rsquo;s like to be on the front lines,&rdquo; he said. &ldquo;I think he would pursue a very careful American foreign policy. I don&rsquo;t think he&rsquo;d rush to get us involved in wars.&rdquo;

&ldquo;His experience as a warfighter in Vietnam and his service in the infantry should produce an outlook that will temper the thirst for the use of military force,&rdquo; said Eaton, who now serves as a senior advisor at the National Security Network.

After Vietnam, Hagel finished college and worked for a congressman from Omaha, then as a lobbyist for Firestone Tire and Rubber Co. He was nominated by President Ronald Reagan to be deputy administrator of the veterans affairs department, but resigned not long after starting because the president wanted to cut Agent Orange studies and programs.

&ldquo;I thought they were going in the wrong direction,&rdquo; Hagel told Vietnam Magazine in 2012.

He worked in the business world, invested in a cell phone company, served as president of a private investment banking firm and headed the USO before running for the Senate in 1996.

In the Senate, Hagel bonded with other Vietnam veterans &ndash; including Sen. John Kerry, who has been nominated to succeed Hillary Clinton as secretary of state &ndash; over their shared experiences.

&ldquo;I&rsquo;ve always thought that those kind of experiences, like any experience &hellip; it gives you a clarity that other people don&rsquo;t always have,&rdquo; Hagel told HBO&rsquo;s History Makers. &ldquo;And I tried to apply that experience to every decision I made on the foreign relations committee regarding Iraq, Afghanistan, and the questions I used to ask were obviously predicated on that experience.&rdquo;

He supported the decision to go to war in Iraq, but later questioned the war and the surge, in part because he said there were too many unanswered questions.

In October, he told Vietnam Magazine he saw a lot of what he had worried about coming to fruition.

&ldquo;I&rsquo;m not sure we enhanced the situation in Iraq in any way although we paid a terrible price and undermined our influence in the Middle East, and our standing after the invasion was the worst ever,&rdquo; he said. &ldquo;In Afghanistan, we lost our way. &hellip; We invaded Iraq and mindlessly took our eye off the ball in Afghanistan and took all of the resources and focused on Iraq &mdash; before the mission in Afghanistan was done.&rdquo;

His stance against Iraq &ndash; including backing a 2007 effort to withdraw troops early &ndash; caused a break with some in his party and angered some veterans, including freshman Republican congressman Rep. Tom Cotton.

&ldquo;Chuck Hagel served our country admirably in Vietnam, but I don&rsquo;t think he&rsquo;s the right man to be secretary of defense,&rdquo; he told Stars and Stripes.

Cotton, a veteran of Iraq and Afghanistan, noted that Hagel has called the Department of Defense bloated. Current Defense Secretary Leon Panetta has repeatedly criticized efforts to cut the defense budget through sequestration.

The executive director of Iraq and Afghanistan Veterans of America called the nomination &ldquo;a historic day for veterans of all generations.&rdquo;

&ldquo;As a former enlisted soldier, Sen. Hagel understands the challenges our troops and veterans face on a deeply personal level,&rdquo; Paul Rieckhoff said in a written statement. &ldquo;He&rsquo;s a man of great integrity who knows what it&rsquo;s like to put his life on the line for his country. &hellip; He has walked in our boots, and we know we can trust him to always have our back.&rdquo;

Joyce Tsai contributed to this report.