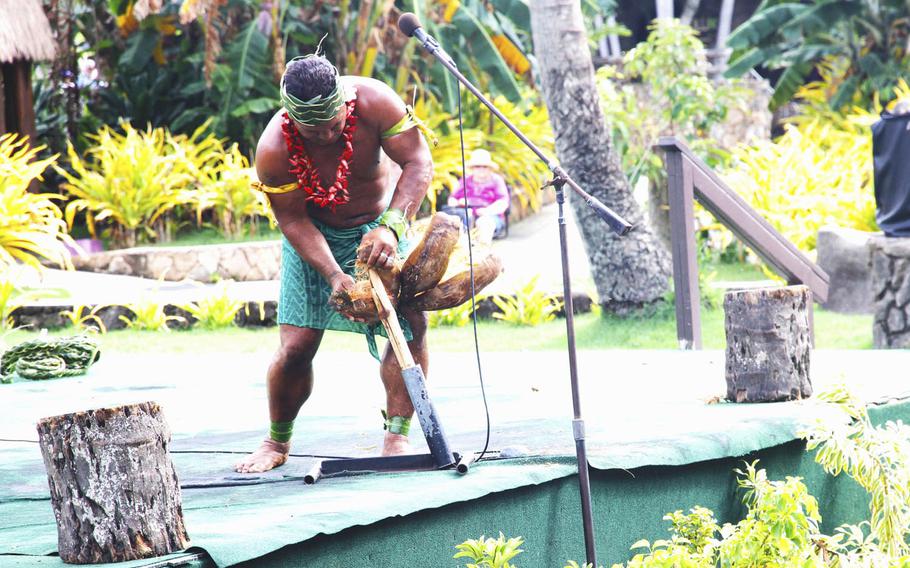 A Samoan demonstrates the art of husking a coconut using the pointed end of a bamboo stick at the Polynesian Cultural Center. (Wyatt Olson/Stars and Stripes)

A Samoan demonstrates the art of husking a coconut using the pointed end of a bamboo stick at the Polynesian Cultural Center. (Wyatt Olson/Stars and Stripes) 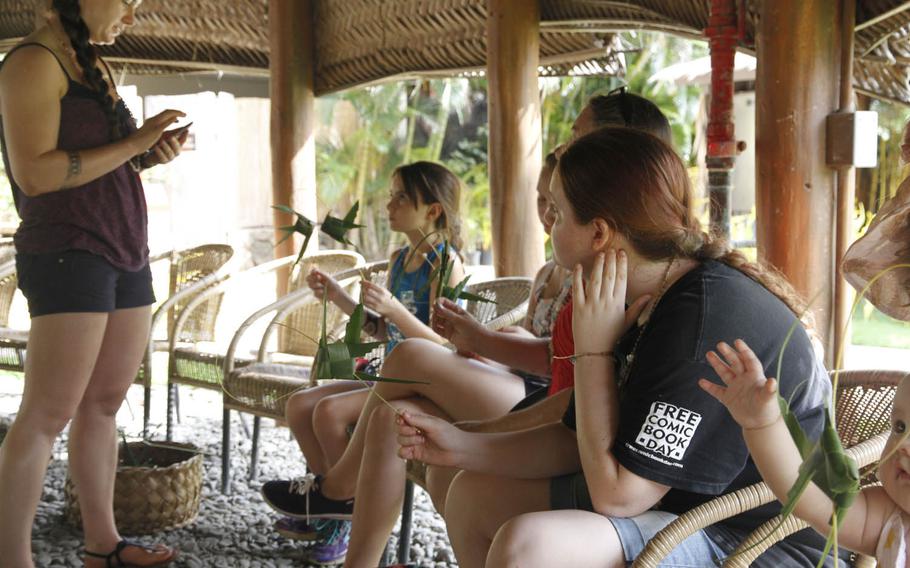 Guests at the Samoa village learn to weave palm fronds into fish. (Wyatt Olson/Stars and Stripes) Colorful patterns adorn the bed in the chief's home in the the Fiji village. In traditional Fiji culture, the chief had the largest, most opulent home on ground higher than all others. (Wyatt Olson/Stars and Stripes) Towering stone "moai" loom over a site depicting the altar and burial place of high-ranking chiefs in many Polynesian islands. (Wyatt Olson/Stars and Stripes) 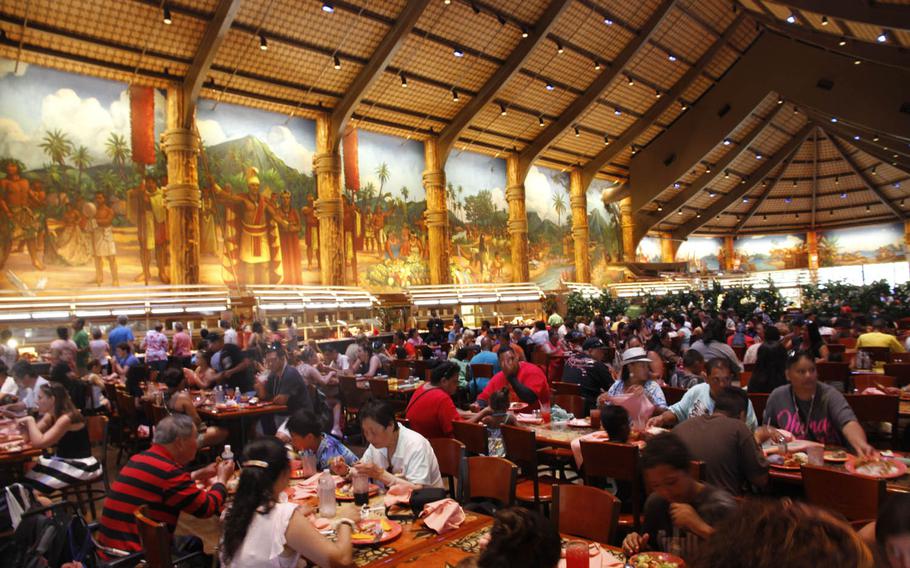 Visitors ride a canoe powered by a gondolier. (Wyatt Olson/Stars and Stripes) 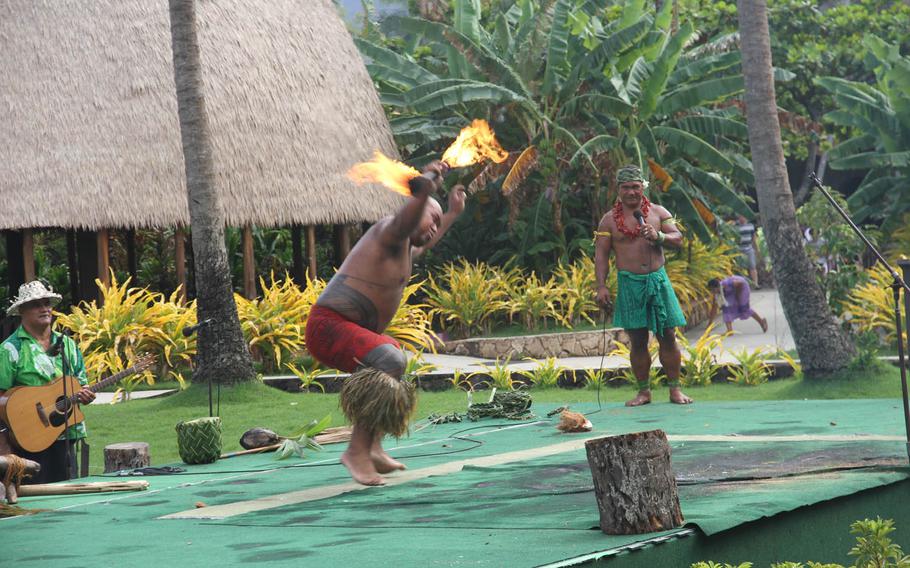 A fire dancer shows how it's done where he comes from during a presentation at Samoa village. (Wyatt Olson/Stars and Stripes) 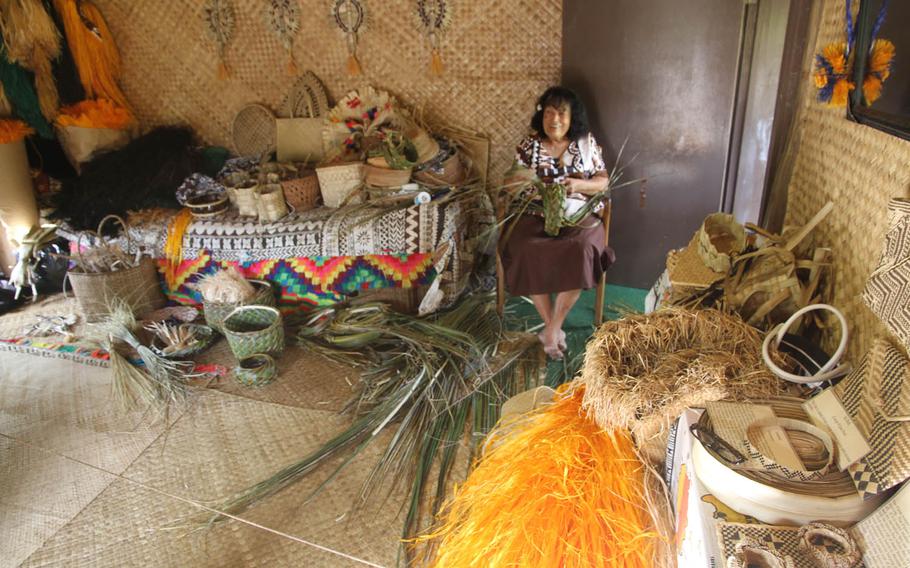 The Polynesian Cultural Center in the North Shore of Oahu is like the ancient Indian parable of the six blind men and the elephant.

Each described a different “elephant” depending on which part they were near enough to feel. An elephant was like a pillar to the man who felt the leg. No, it’s like a rope, said the man who grabbed the tail. And the man touching the belly thought an elephant was a wall.

There’s too much Polynesian Cultural Center to describe fully after a single visit, which I made with two other adults and a baby on a recent Saturday. The center doesn’t open until noon, and as you attempt to find your way around the labyrinth of pathways that snake through villages representing the island cultures of Fiji, Samoa, Tonga, Tahiti, Aotearoa (New Zealand,) the Marquesas and Hawaii, you’re going to miss a lot.

And that’s not even including some of the other attractions: the canoe and tram tours, several buffets, a movie, a marketplace, a Polynesia football hall of fame and a live song-and-dance extravaganza in the immense amphitheater.

The cultural center is owned by the Mormon church, whose Hawaii campus of Brigham Young University is next door. The school founded the center in 1963 as a way of providing part-time jobs to students in a part of Oahu that even today feels remote. (That’s now changing, with a new Marriott next door and a sign hailing a coming McDonald’s.)

There’s not much in the way of proselytizing here, but religion does leave its mark. I can’t remember visiting anywhere — other than my grandma’s house — where there’s been more concern about how I was doing and whether I needed any help as offered by convivial workers here. There’s no booze allowed in or sold on the premises, and their brochure asks visitors to refrain from using profanity.

My best advice for an afternoon visit is to pick up the small daily schedule/map near the entry and take a few minutes to plan visits to the villages. There are a plethora of presentations and activities at the villages, starting at 12:30, with the last ones offered at 4:30, many coinciding in time. You won’t get to them all — not by a long shot — but with some planning you can position yourself to move efficiently among several.

The conundrum is that the bucolic setting — right down to a lazy stream peppered with gondolier-powered boats — turns a purposeful stride into a stroll.

We ambled first to the Samoa village, where we entered a grass hut and were taught how to weave two palm fronds into a fish.

Before we were finished with that, the sound of drums outside signaled that one of the afternoon’s five presentations by Samoan natives was underway. Its host, dressed in traditional garb but holding a microphone, was one part cultural guide — explaining and showing how Samoans traditionally cooked, ate, hunted and celebrated — and one part stand-up comedian.

He showed how those islanders husked a coconut with just a pointed stick of bamboo and broke the hard shell in half by hitting it in the exact right spot with a rock.

Later, several Samoan men competed to start a fire by furiously rubbing sticks on bamboo. Another clambered up the trunk of a palm tree four stories high in a matter of seconds.

Among the many parts of the elephant we didn’t get to touch that day were a coconut oil-making demonstration, “Go Native” activities such as throwing a spear or cooking in an umu oven, and a canoe pageant with floating dancers and music from each of the villages. We never got anywhere near the Tonga and Tahiti villages.

The general admission of $49.95 gets an adult all of the above, but we upgraded to a level that included a dinner buffet and the live evening show “Ha: Breath of Life” for $74.95 ($59.96 for ages 5-11). All packages come with a “free within three” offer, meaning free entry if you return within three days.

The main buffet hall was spectacularly cavernous, with huge murals depicting life in Polynesia. The spread was not extensive but definitely had something for everyone, from prime rib, fish and chicken to a salad and fruit bar.

The center is rightly proud of its production of “Ha: Breath of Life,” during which they forbid the use of cameras and video recorders. It loosely tells of the life cycle of birth to death to birth as experienced in the Polynesian islands — a telling that includes much drumming, hula, singing and, of course, fire dancing.

In the summer, the 90-minute show begins just as the sun is setting behind the mountainous backdrop of the outdoor amphitheater, and by the fire-dancing finale, the flame-twirlers glow in darkness.

Notes: Free parking. Patrons must wear shoes and shirt. Bathing suits, outside food and alcohol not allowed. Tipping is not required nor expected for employees working at the center.