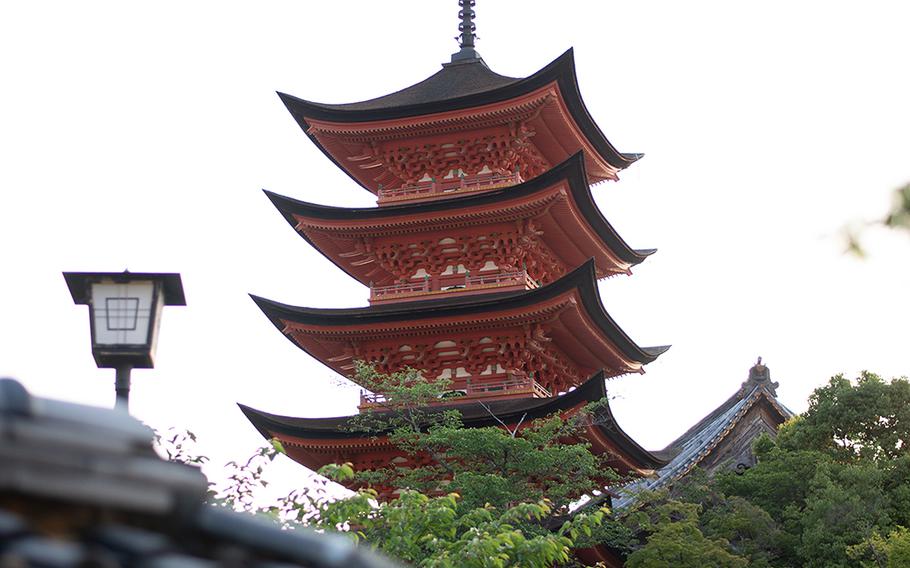 The five-story Tahoto Pagoda pokes above the cherry trees at Miyajima, Japan. (James Bolinger/Stars and Stripes) 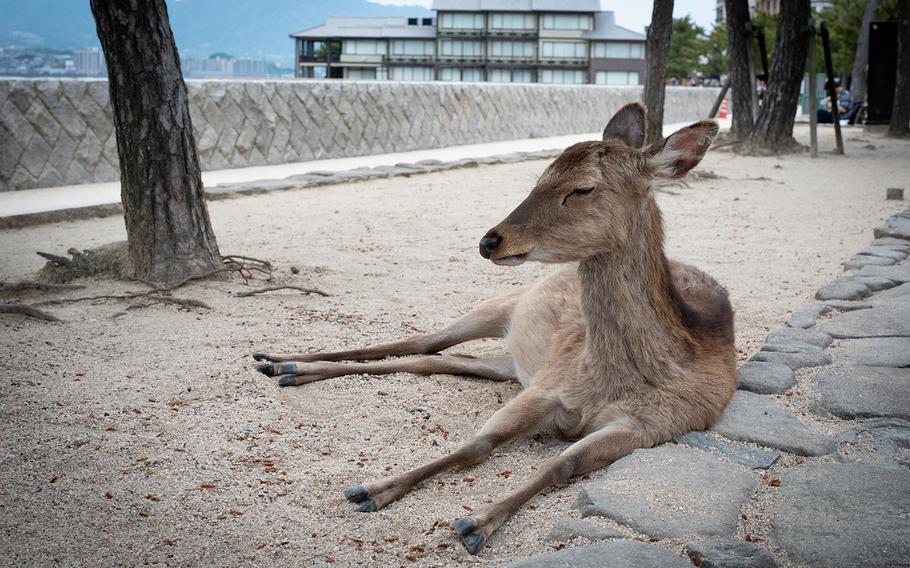 Many of the wild deer that walk the streets of Miyajima are friendly enough to pet. (James Bolinger/Stars and Stripes) The entrance to Itsukushima Shrine at Miyajima, Japan, is a photographer's dream with its brilliant orange pillars and wooden walkways. (James Bolinger/Stars and Stripes)

The floating O-torii and Itsukushima Shrine at Miyajima south of Hiroshima are two of Japan’s most popular attractions, but ongoing restoration work there shouldn’t stop Americans stationed in Japan from planning a visit.

Miyajima, or the “Island of the Gods,” is one of the three most scenic places in Japan, according to the island’s official tourist website, and a prime destination for an easy day trip or weekend getaway for those at Marine Corps Air Station Iwakuni.

It’s especially popular for professional and amateur photographers who make their way around the picturesque landscape.

The most popular photo subject is the O-torii, which appears to float gently on the waves when the tide is high. The bright orange structure, which stands nearly 60 feet tall in stark contrast to the dark green, forested hillsides behind it, was built in 1875 and is the eighth O-torii at Miyajima. The first was built in 1168.

Other photo ops include Itsukushima Shrine, a UNESCO World Heritage site, with its brilliant orange pillars and wooden walkways. There’s also the five-story Tahoto Pagoda, which pokes above the cherry trees, and the many scenic orange footbridges in Momijidani Park that cross a small river. They’re perfect for family photos.

If you time your trip right, you can catch the leaves on the Japanese maples changing color, or the cherry blossoms that blanket the entire town in pink and white flowers.

A long tramway makes its way through a primeval forest to the peak of Mount Misen, which many tourists with physical fortitude choose to hike. From the top of Misen one can see the islands of the Seto Inland Sea.

The kids will enjoy the wild deer that inhabit the island. They walk the streets and are friendly enough to pet.

My most recent adventure included a visit to the Miyajima Brewery to sample the three varieties of Miyajima beer. My favorite was the red ale, which was strong but not overly hoppy. Best of all, the brewery let me take the cup with me, and I sat on the beach with my feet in the water enjoying the peaceful sound of the surf striking the sand.

The most popular dish on the island is grilled oysters, and they are served at a variety of stands on the oceanside road. They are as big as an adult’s hand, and from my understanding are quite tasty. I’m not an oyster guy, so I did not partake, but those who did seemed pleased.

Miyajima is halfway between Iwakuni and Hiroshima and is best accessed by train. After arriving at Miyajima Guchi station, take a short walk following the signs to the ferry. A roundtrip ferry ticket costs 360 yen.

Visitors will want to bring plenty of yen for food and shopping. I started my day with 5,000 yen (about $45) and was running on empty after dinner, dessert and a few beers.

It’s possible to see most of the sights on Miyajima in a day if one takes the tramway to the top of Misen and starts early.

However, to see the entire island and get the best lighting for your photos, I recommend more than one trip, especially if you want to hike to the mountaintop. The photo opportunities also change throughout the year.

DIRECTIONS: From Iwakuni Station, take the local train toward Hiroshima and get off at Miyajima Guchi Station. Follow the crowd through a tunnel under the road to the ferries.

FOOD: The island is populated with many restaurants and stands that serve a variety of Japanese foods.