Norfolk training: 'No ship is worth the life of a firefighter' 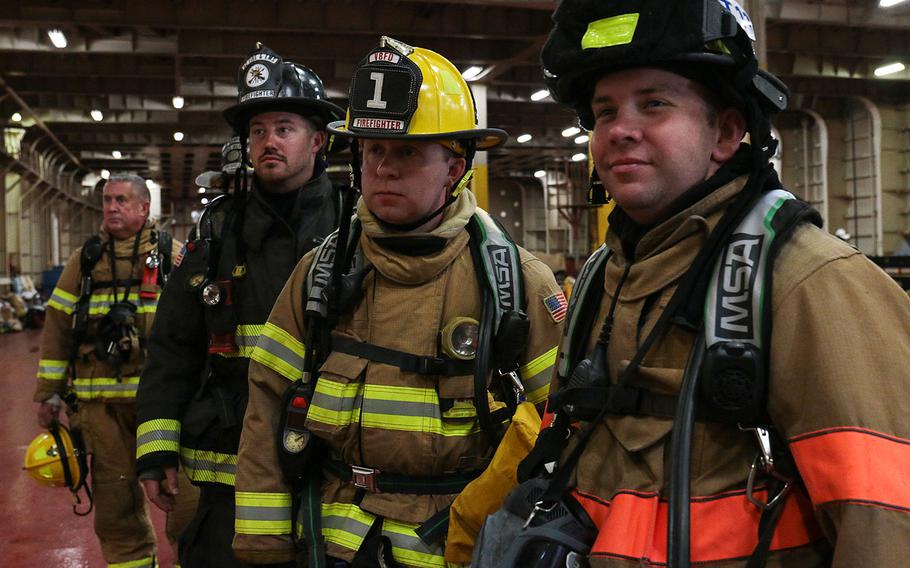 Firefighters wait their turn to go below deck of the cargo ship Cape Rise to combat a simulated fire on May 17, 2018. The firefighters were participating in the 27th annual Marine Firefighting School held May 14-19 in Norfolk, Va. (Michael S. Darnell/Stars and Stripes)

Firefighters wait their turn to go below deck of the cargo ship Cape Rise to combat a simulated fire on May 17, 2018. The firefighters were participating in the 27th annual Marine Firefighting School held May 14-19 in Norfolk, Va. (Michael S. Darnell/Stars and Stripes) 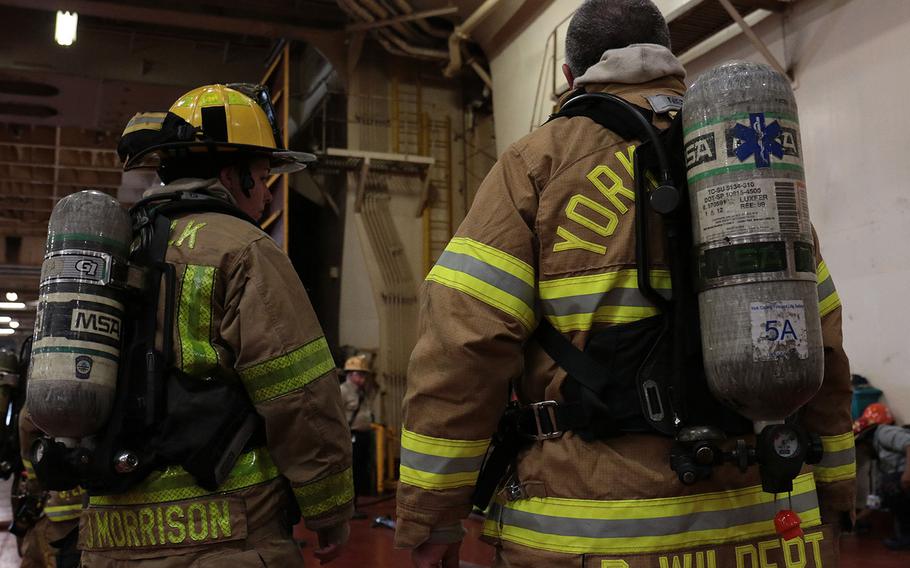 Firefighters gear up to go below deck of the cargo ship Cape Rise to combat a simulated fire on May 17, 2018. The firefighters were participating in the 27th annual Marine Firefighting School held May 14-19 in Norfolk, Va. (Michael S. Darnell/Stars and Stripes) Part of the training at the 27th annual Marine Firefighting School in Norfolk, Va., was teaching firefighters the complexities of maneuvering around the cramped corridors and gangways of a naval vessel. Here, firefighters go on a hunt aboard the docked cargo ship Cape Rise on May 17, 2018. (Michael S. Darnell/Stars and Stripes) 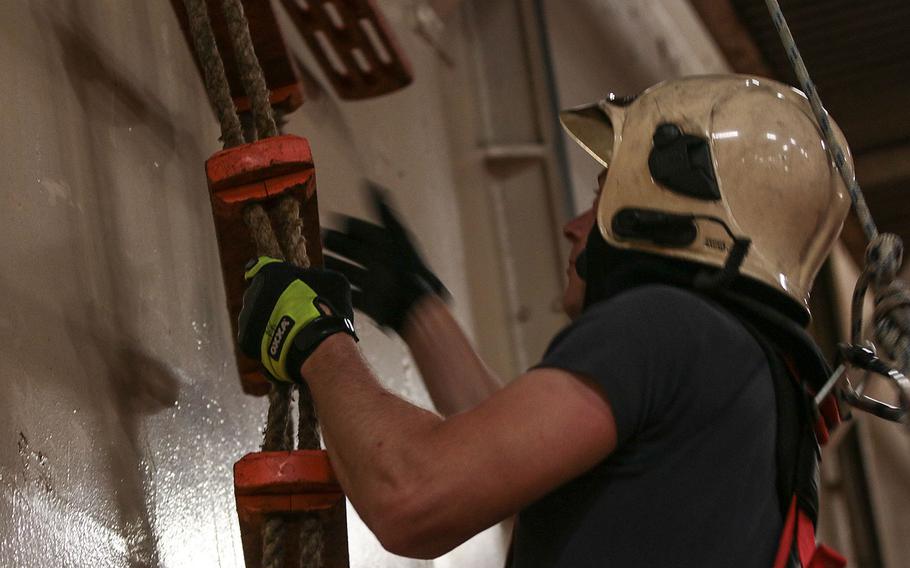 A firefighter climbs a ladder as part of the training at the 27th annual Marine Firefighting School held May 14-19 in Norfolk, Va. (Michael S. Darnell/Stars and Stripes) Coast Guard Chief Warrant Officers Rob Birdwell, left, and David Porco, came to Norfolk, Va., from their training center in Coast Guard Training Center Yorktown, Va., to teach firefighters about the unique challenges of keeping a ship afloat while fighting a massive fire on it. Here, they demonstrate that on a model at the 27th annual Marine Firefighting School held May 14-19 in Norfolk. (Michael S. Darnell/Stars and Stripes)

NORFOLK, Va. — Fighting fires is among the most dangerous of professions. The Federal Emergency Management Agency reports that 93 firefighters lost their lives last year and 38 have been killed in the line of duty in 2018.

Most firefighters have trained extensively to mitigate the danger on land. But that’s not necessarily true when firefighters are asked to combat flames aboard naval vessels, where much of what they’ve trained for on land can be turned on its head.

That’s a problem for municipalities near major bodies of water, and it’s one that the annual Marine Firefighting School in Norfolk, Va., looks to solve.

In its 27th year, the five-day course brings together more than 100 students from regions as close as Norfolk and as far-flung as Singapore to better equip them to handle the unique dangers of shipborne firefighting.

When a fire breaks out on a massive naval vessel, everything -- from the complex layout to the chemicals aboard -- becomes a new danger. Keeping the vessel afloat becomes a real concern.

Al Huelsenbeck, deputy chief of operations for the Delaware River and Bay marine incident response team and one of the instructors for the Norfolk training event, said that the firefighters in attendance are experienced, but are not accustomed to the unique challenges of fighting fires on ships.

“The majority of municipal firefighters are not acclimated to ships, so that becomes a concern for them,” he said. “We have to put it into the marine environment.”

To do so, the instructors at Norfolk run students through a scenario in which a fire has broken out below decks of a cargo ship, using the docked Cape Rise.

The firefighters are broken into companies of 25 and each one has an hour to put out the simulated fire – complete with vision-obliterating smoke. They are forced to maneuver three decks of twisted corridors, steep drop-offs and narrow gangplanks, all while managing heavy hoses and a limited supply of air.

Doug Dillon, chief of the maritime response team for the Delaware River and an instructor at Norfolk, said that in a normal structure on land, firefighters “can get out very quickly; it may only take a few seconds.” On a ship, it can take 3 to 5 minutes to exit. Firefighters can use up half of their air supply just reaching the fire, he said.

Firefighters responding to a call on a ship have to learn to cooperate with people they work with every day joined by different agencies that could have jurisdiction over ports and naval facilities.

The training forces firefighting departments, including some Coast Guardsmen, to work together even though their tactics, techniques and jargon can be wildly different.

The below-deck scenario is just one part of the Norfolk training course. Firefighters also have to decipher a ship layout map to find points around the vessel – similar to land navigation drills in the military. They climb a rope and plank ladder and learn from the Coast Guard about how a ship’s buoyance can be affected by firefighting techniques.

The training course at Norfolk shows how complex and intense fighting fires below decks can be, to firefighters and their commanders, Huelsenbeck said.

“There is a saying among some firefighters,” Huelsenbeck said. “ ‘Ship’s no problem. It’s nothing but a high-rise put on its side.’ You know who tells you that? The guy who never fought a fire belowdecks on a ship.”

“They can make a more informed decision and most importantly, the safest decision for their people, and that’s why we do this,” he said. “No ship is worth the life of a firefighter.”