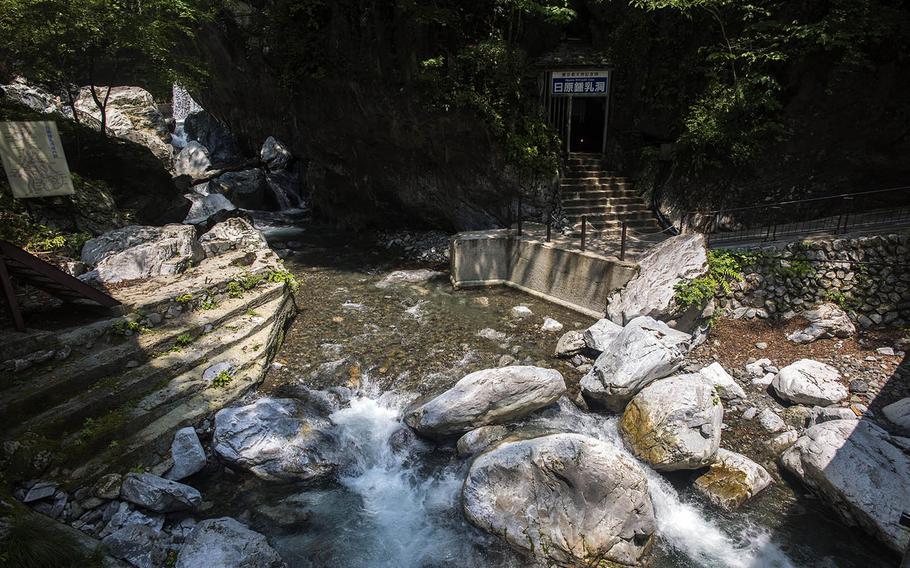 Buy Photo
Walk across the Nippara River to enter the Nippara Limestone Cave near Okutama, Japan. (Theron Godbold/Stars and Stripes)

Buy Photo
Walk across the Nippara River to enter the Nippara Limestone Cave near Okutama, Japan. (Theron Godbold/Stars and Stripes) 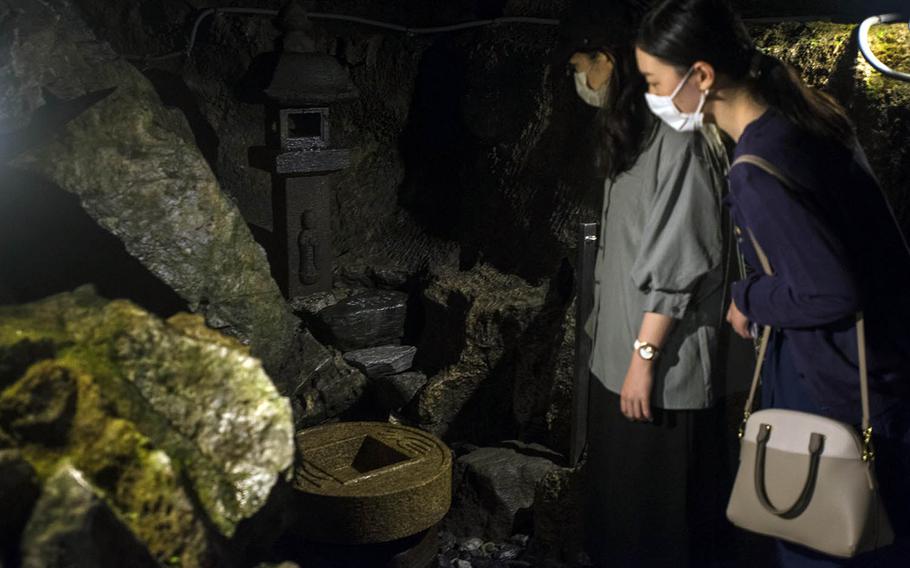 Buy Photo
Visitors to the Nippara Limestone Cave near Okutama, Japan, check out a worship spot used by monks from the Shugendo sect of Buddhism. (Theron Godbold/Stars and Stripes) Buy Photo
Nippara Limestone Cave near Okutama, Japan, is the largest of its kind in the Kanto region. (Theron Godbold/Stars and Stripes) A 1½-hour drive west of Yokota Air Base, home of U.S. Forces Japan in western Tokyo, is Nippara, the largest limestone cave in the region.

Located in Chichibu-Tama-Kai National Park near Okutama, Nippara Limestone Cave makes for an interesting destination with an average year-round temperature of 53 degrees inside.

The cave reopened in July after roads there were damaged during the 2019 typhoon season.

When driving to the cave, don’t miss any of the scenery on the narrow and winding roads leading to a small parking area overlooking the Nippara River and the cave entrance.

Limited free parking is available with an overflow lot a mile away.

Entrance fees vary from $8 for adults, $7 for middle-schoolers and $6 for elementary school children. The staff speaks minimal English and pamphlets are in Japanese.

After paying my entrance fee, I crossed a small walking bridge over the Nippara River that leads to the cave entrance. Here I was greeted with a blast of chilled air. After putting on a light jacket, I stepped through the doorway leading to more than 2,500 feet of cave systems.

As I walked through the eerie world under a mountain, I had to stoop at places as the walls and ceilings dripped chilled water that had seeped through the earth.

Lights guided the path through corridors of stone, winding its way through the cave system. The main chamber and halls are lined with small stalactites and stalagmites.

The cave has been a sacred place for practitioners of Shugendo, a Japanese religious tradition that combines elements of folk beliefs, Shinto and Buddhism. They live in the mountains undergoing ascetic training, a lifestyle characterized by abstinence from sensual pleasures, and remnants of their practices can be seen inside.

The main chamber is lit with colorful lights that give an otherworldly glow to the space. Two paths lead to small shrines.

Climbing your way from the main chamber and up a steel stairway, the cave grows smaller at points as the path leads you to a section where stalactites and stalagmites line the surfaces and small alcoves. These calcium bicarbonate deposits, thousands of years old, are generally smaller at Nippara but are worth the trek.

The entire path from entrance to the exit took about 45 minutes at a leisurely pace.