Nintendo Tokyo is a paradise for gamers and anime fans 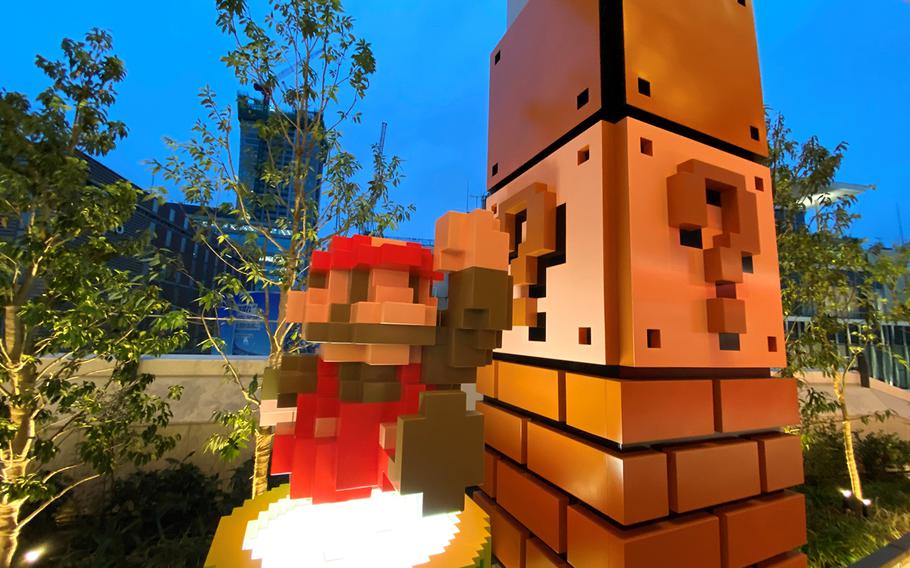 A statue of 8-bit Mario greets customers just outside Nintendo Tokyo on the sixth floor of the Parco Shibuya building, Thursday, Nov. 28, 2019. (Aaron Kidd/Stars and Stripes)

A statue of 8-bit Mario greets customers just outside Nintendo Tokyo on the sixth floor of the Parco Shibuya building, Thursday, Nov. 28, 2019. (Aaron Kidd/Stars and Stripes) 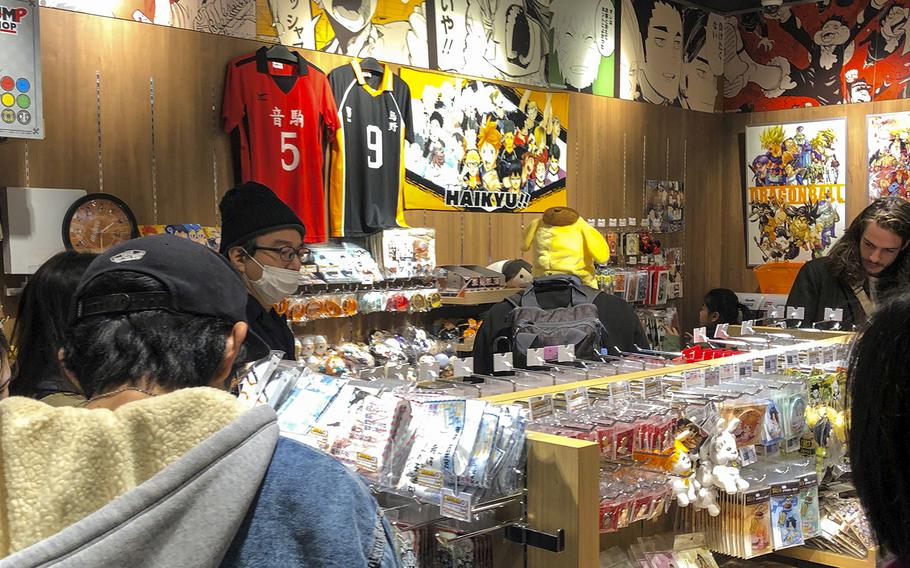 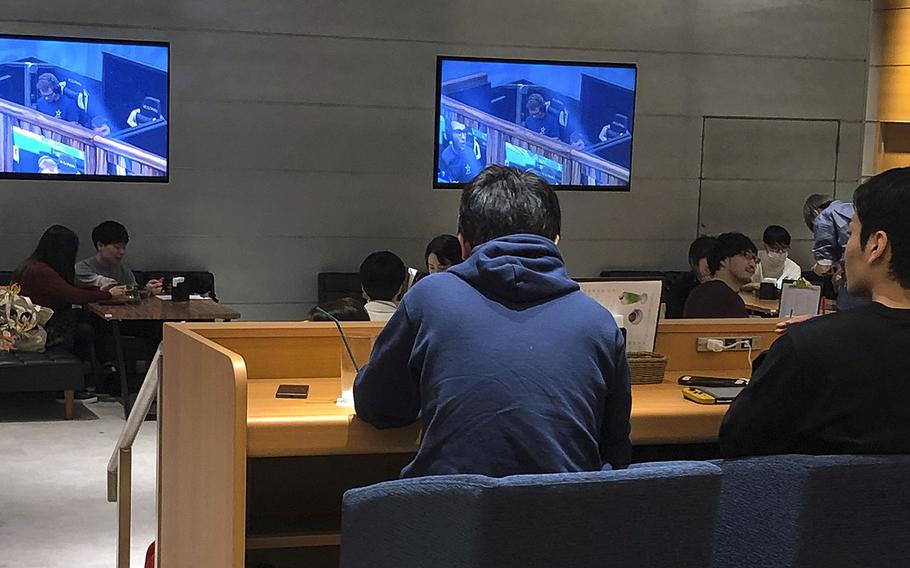 GG Shibuya Mobile Esports Cafe and Bar near Nintendo Tokyo allows patrons to enjoy a drink or a meal while playing games with friends or other customers. (Christian Lopez/Stars and Stripes) 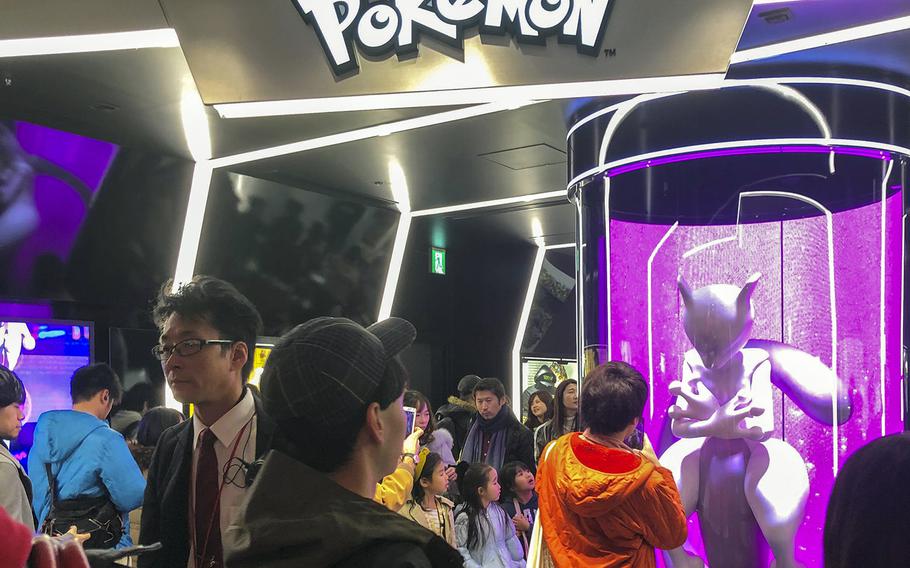 Customers take photos of a Mewtwo statue while waiting to enter the Pokemon Center near Nintendo Tokyo in Shibuya, Sunday, Dec. 1, 2019. (Christian Lopez/Stars and Stripes) 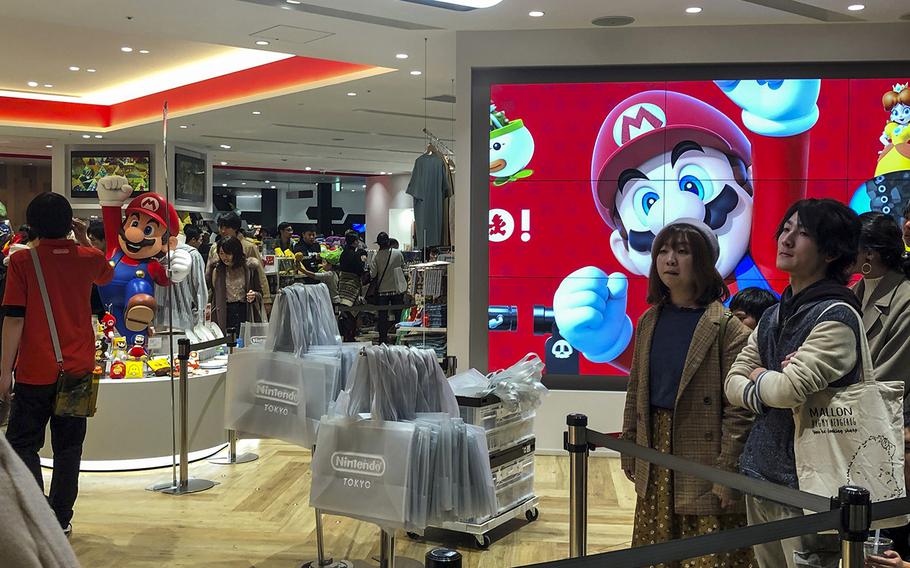 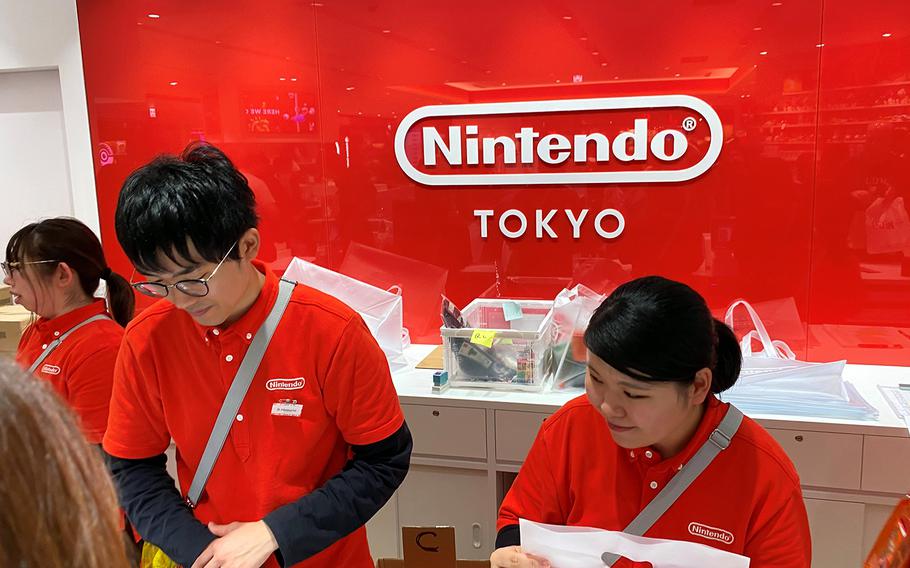 Nintendo Tokyo clerks ring up purchases at the store inside the Parco Shibuya building, Thursday, Nov. 28, 2019. (Aaron Kidd/Stars and Stripes)

Fans of anime and video games — especially franchises that fall under the Nintendo umbrella — are making pilgrimages to the sixth floor of the newly opened Shibuya Parco building, site of Nintendo Tokyo.

The path to “Cyberspace Shibuya” — a term coined by Parco — is marked by customers carrying shopping bags emblazoned with Nintendo’s iconic red-and-white logo.

I visited about a week after it opened on Nov. 22, and lines to the sixth floor started at the ground floor of the 20-story complex.

While the floor boasts a variety of shops dedicated to Nintendo, Pokemon and Capcom, fans of Mario and Pikachu had to stand in line even longer to enter their official stores.

For hardcore gamers, it’s worth the wait. Nintendo Tokyo — the company’s first shop in Japan — is decorated with large statues of famous characters like Mario, Link from the Legend of Zelda and Isabelle from Animal Crossing.

Along with games and exclusive consoles, the shop sells Nintendo-themed miniatures, figurines, plushies, pillows, bags, watches, apparel and dining sets. Some items are available only in Japan.

Prices for most items range from 600 yen (just under $6) for keychains and hand towels to more than 7,000 yen for tote bags and backpacks. A simple Nintendo Tokyo T-shirt fetches 4,800 yen.

A section of the store also has a Nintendo Switch on display so customers can try out the latest releases, such as Luigi’s Mansion or Pokemon Sword and Shield (Nintendo owns the Pokemon franchise).

At the nearby Pokemon Center Shibuya, customers are greeted by a statue of a Mewtwo inside an incubation chamber. Like Nintendo Tokyo, the Pokemon shop offers a plethora of merchandise.

At a shop dedicated to Capcom — a Japanese video game maker known for titles like Street Fighter, Monster Hunter and Resident Evil — a statue of Street Fighter’s Ryu greets customers with his famous Hadouken pose, in which he channels energy to shoot an opponent.

Next door, a store called Jump Shop sells merchandise from a variety of Japanese anime titles like Naruto and One Piece.

The sixth floor also hosts GG Shibuya Mobile Esports Cafe and Bar, where patrons can enjoy a drink or a meal while playing games with friends or other customers.

Imagine a sports bar for gamers with monitors covering the walls. One very large screen, which was being used for a Street Fighter matchup during my visit, will surely host future Super Smash Bros Ultimate tournaments.

For a limited time during the holiday season, those who spend more than 5,000 yen at Nintendo Tokyo will receive a free Christmas ornament. Spend 20,000 yen or more to get the entire four-piece set.

FOOD: Aside from the sixth-floor gaming cafe and bar, Parco Shibuya has dozens of restaurants offering a variety of cuisine, including Spanish-Italian, Korean barbecue, oysters and burgers.