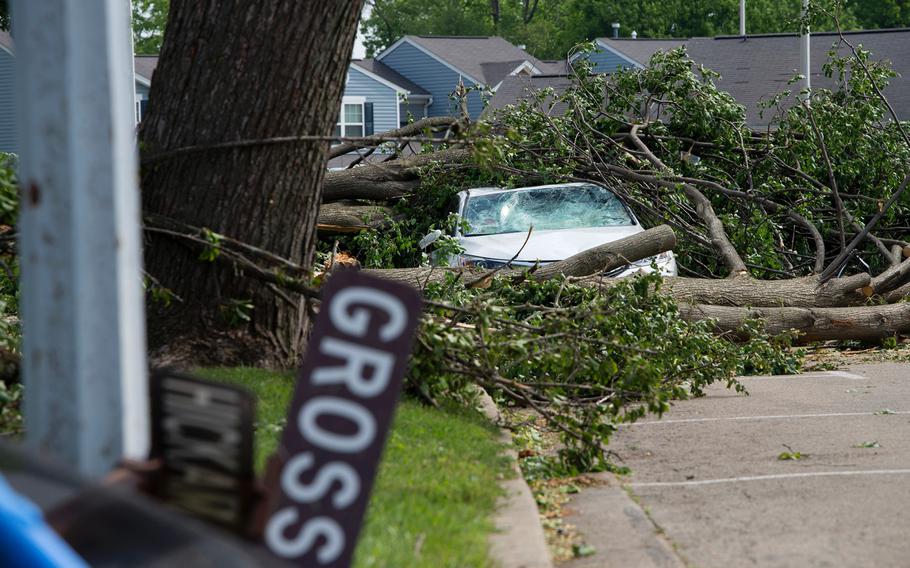 A tornado damaged approximately 150 homes at the Properties at Wright-Field near Wright-Patterson AFB, Ohio, May 27, 2019. (Jean-Paul Arnaud-Marquez/U.S. Air Force)

A dozen homes at Wright-Patterson Air Force Base are uninhabitable after a tornado ripped through the Ohio base on Memorial Day, base officials said.

In total, roughly 150 homes in the Prairies at Wright Field housing area were damaged, according to a news release from the base. During the past two days, base officials and the privatized housing contractor have inspected all units to identify structural damage.

“Displaced families were directed to temporary lodging facilities to ensure they had a safe place to stay during recovery operations,” according to the release. Of the 12 homes damaged, three were vacant.

The holiday weekend brought severe weather to much of the Midwest, including the southwest Ohio base, home to the 88th Air Base Wing, Air Force Materiel Command and the Defense Department’s National Air and Space Intelligence Center. In all, eight tornadoes touched down in the region surrounding Wright-Patterson on Monday and Tuesday, according to the National Weather Service, which sent teams to the area Wednesday to access damage. About 8,000 servicemembers and 22,000 civilians work on the 8,000-acre base.

Officials at Wright-Patterson are also continuing to access damage and determine what the cost will be to finish clearing debris and repair structures across the base, said Marie Vanover, a base spokeswoman.

“We will continue to work with the privatized housing contractor to removed roofing and structural debris and develop a long-term recovery plan for the housing area,” she said.

One injury was reported on base, according to the Wright-Patterson release. About 12 miles west in the city of Dayton, officials said in a tweet that three injuries were reported, which was “miraculous with the amount of damage” the city sustained.

At the airfield at Wright-Patterson, operations were suspended to allow for removal of 331 pounds of debris, according to the release. Flight operations were cleared to resume Tuesday afternoon.

“There was no impact to personnel readiness,” Vanover said.

Beyond that, just a few other base facilities received minimal damage, she said. No personnel were displaced from offices and no equipment or aircraft was reported destroyed.

The Prairies Child Development Center closed for one day, but has since reopened.

Volunteers and workers spent much of Tuesday clearing downed trees and debris. By the end of the day, all roads were cleared for traffic, according to the release. In addition, electrical service was safely restored, including an inspection for any exposed or downed lines.

A boil water advisory remains in effect and water testing is expected to be completed Wednesday followed by full restoration of service, according to the release. In the meantime, residents can get bottled water at the Prairies Chapel Education Center.

For people with damage to personal property, the 88th Air Base Wing Legal Office is operating a claims center in the Hope Hotel from 8 a.m. to 4 p.m. The number of claims made so far was not available Wednesday.

The Dayton area is bracing for another day of potential severe weather, said Myron Padgett, a meteorologist with the National Weather Service in Wilmington, Ohio. Damaging winds and hail are the main threat as heavy rains continue to move through southwest Ohio on Wednesday afternoon and Thursday.

“We can’t rule out a tornado, but that’s a very low threat,” he said.

Friday and Saturday are expected to be dry with temperatures in the upper 70s and low 80s, Padgett said.