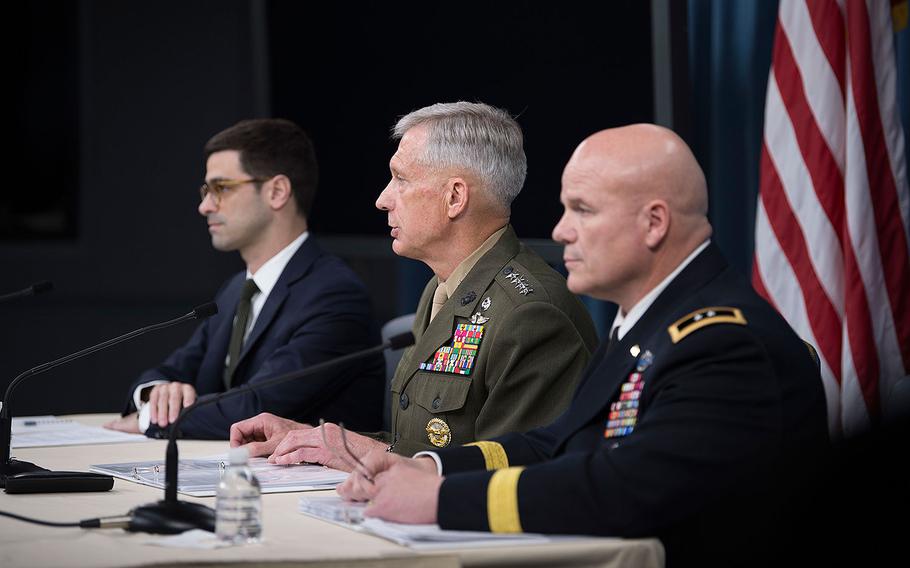 Marine Gen. Thomas D. Waldhauser, commander, U.S. Africa Command, speaks to reporters at the Pentagon on May 10, 2018 about the results of the investigation of the Oct. 4, 2017 ambush in Niger. Assistant Secretary of Defense for International Security Affairs Robert S. Karem is on the left and Army Maj. Gen. Roger L. Cloutier Jr., chief of staff, U.S. Africa Command, and lead investigating officer, is on the right. (Kathryn E. Holm/U.S. Navy)

WASHINGTON — Seven Americans who survived a deadly ambush on a convoy in a remote part of Niger in October expected to die on the battlefield, according to new information released Thursday by the Pentagon.

More than an hour after their team of 11 American and 34 Nigerien troops was attacked just outside the village of Tongo Tongo in the West African nation, the American survivors – six Green Berets and an intelligence contractor – drafted final words to families and friends, a video narration of the ambush revealed. Four U.S. soldiers were killed by Islamic State fighters in the ambush.

“They wrote short messages to loved ones on personal devices, believing they would soon be overrun,” the video’s narrator states as dots representing the seven Americans and four Nigeriens take a defensive position in a swamp while enemy fighters pursued them.

The Pentagon on Thursday released the 23-minute video that it prepared for Congress, one week after Defense Department officials released an eight-page summary of a roughly 6,300-page investigation into the Oct. 4 incident that led to widespread scrutiny of the U.S. military’s mission in Africa. An abbreviated 11-minute version of the video was shown to reporters on May 10, but it was cut off just before the narrator mentioned the messages soldiers sent home.

Marine Gen. Thomas Waldhauser, the commander of U.S. Africa Command, told reporters that they were not initially shown the video because of its length.

According to the newly released video, the ISIS fighters stopped pursuing the Americans and Nigeriens shortly after they drafted their messages when American drones and two French fighter jets arrived at the scene. After four shows of force by the French warplanes, the enemy forces eventually fled the area, though no bombs were dropped.

The deaths of four U.S. soldiers, Staff Sgt. Bryan Black, Staff Sgt. Dustin Wright, Staff Sgt. Jeremiah Johnson and Sgt. La David Johnson, made the fight the deadliest on the African continent for American troops since the infamous Black Hawk Down incident in Somalia in 1993.

Black and Wright were Green Berets and Jeremiah Johnson and La David Johnson – who were not related – were support troops attached to 3rd Special Forces Group, which had deployed from Fort Bragg in North Carolina about a month before the attack.

Top AFRICOM officials, including Army Maj. Gen. Roger Cloutier, the AFRICOM chief of staff who led the probe into the incident, blamed systemic problems for the soldiers ending up in a fight where they were outmanned three-to-one and outgunned.

The soldiers did not spend enough time training together before deploying, did not properly prepared for their mission with Nigerien troops and were not properly equipped to fight a well-trained enemy, Cloutier determined in his investigation. The troops initially set out on a mission to capture or kill a leader of ISIS in the Greater Sahara without properly informing their chain of command, which thought the eight-vehicle convoy was on a mission to meet with village leaders. The American-Nigerien unit did not anticipate encountering such a large force of militants, which Cloutier said had never been observed operating in the area previously.

The new video also revealed other details about the efforts to rescue the American survivors and the four U.S. soldiers who were killed, including La David Johnson, whose body was not found for another two days after the attack.

The video shows a Nigerien force tasked with rescuing the survivors some five hours after the beginning of the ambush had opened fire for 48 seconds on the American-Nigerien unit with automatic weapons after “mistaking the team for enemy forces.”

“Fortunately, no one was injured further,” the video’s narrator said.

Drone footage included in the new video shows the recovery of La David Johnson’s body. Pentagon spokesmen asked the footage not be published out of consideration for Johnson’s loved ones.

The grainy, black and white footage shot from high in the air shows Nigerien troops recovering the soldier’s body from under a tree more than a half-mile from the ambush site and later shows American forces loading his remains into a helicopter.

Cloutier told reporters May 10, Johnson died at the location where his body was found and he had never been captured alive by enemy fighters, as some reports had indicated previously. ISIS militants stripped his body of his boots and his gear, but he was dead – shot more than 20 times, according to a defense official – before they reached him.

“He made his last stand, and he fought to the end,” Cloutier said.