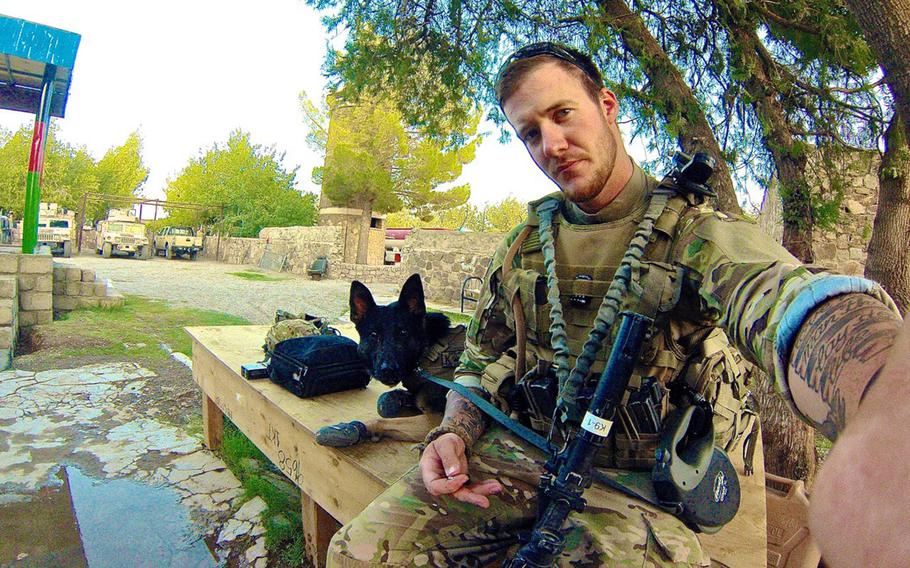 Army Sgt. Wess Brown snaps a selfie of him and his military working dog Isky in Afghanistan. The German shepherd, whose career was ended when he had to have a leg amputated, now serves as Brown's PTSD service dog. (Courtesy of Wess Brown)

Army Sgt. Wess Brown snaps a selfie of him and his military working dog Isky in Afghanistan. The German shepherd, whose career was ended when he had to have a leg amputated, now serves as Brown's PTSD service dog. (Courtesy of Wess Brown) 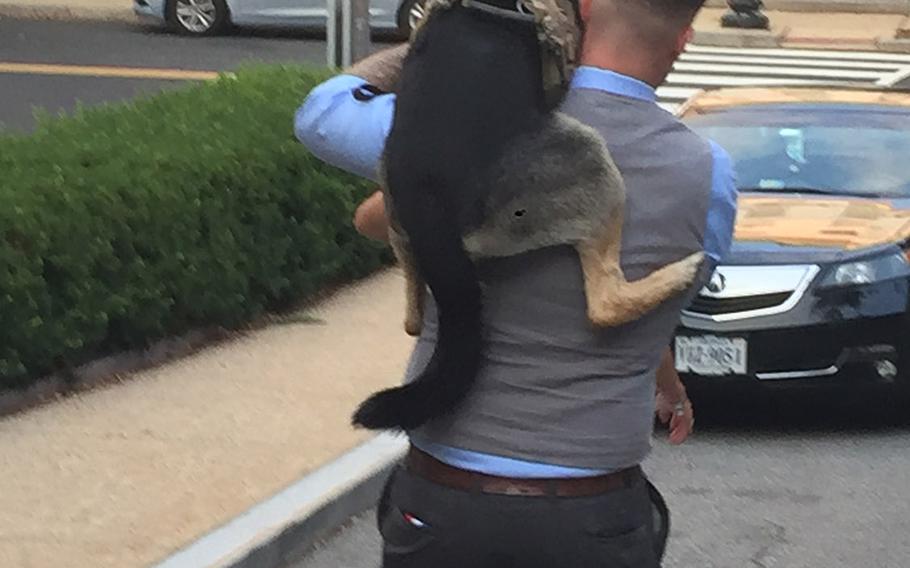 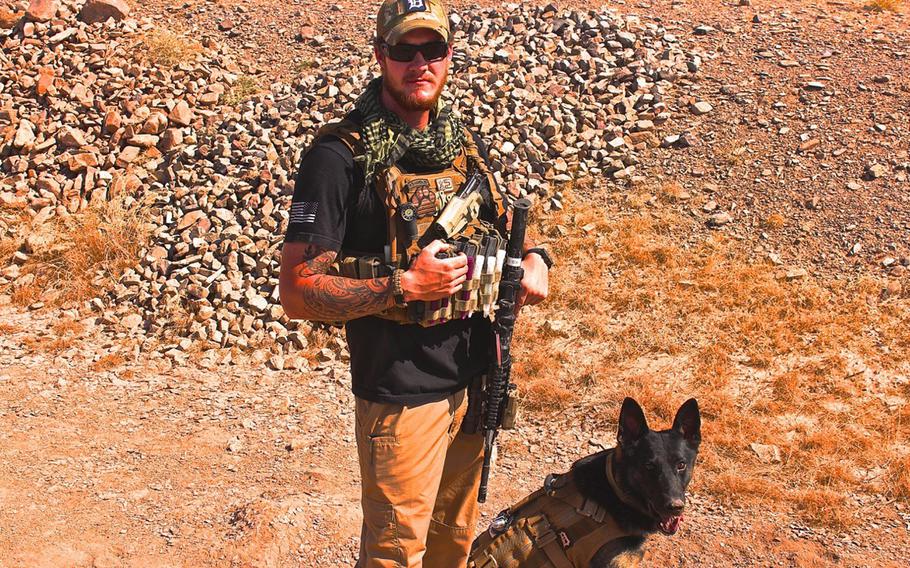 Army Sgt. Wess Brown is the only handler military working dog Isky has ever had. The two have been together since the German shepherd was 18 months old. The dog received a Medal of Courage last week for his service. (Courtesy of Wess Brown) 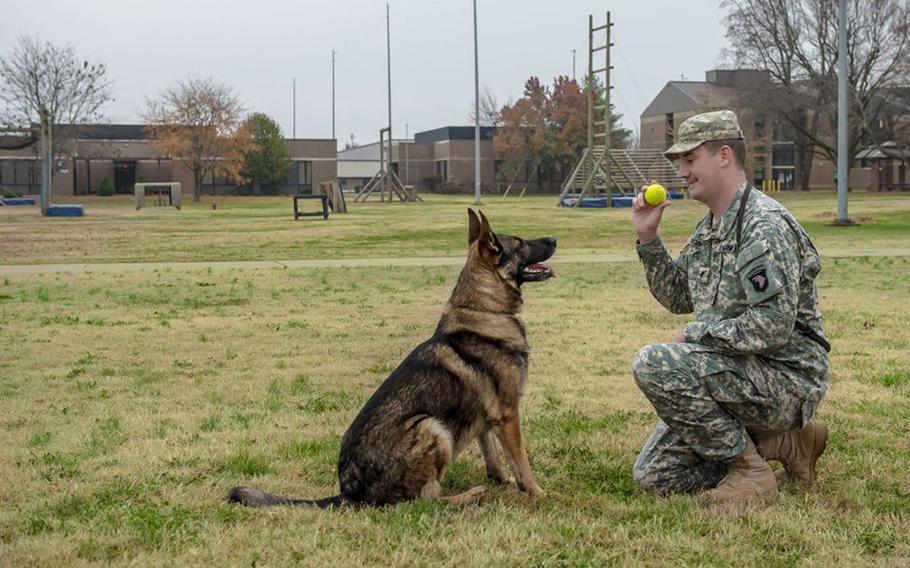 Matty, a Czech German shepherd, served as a bomb-detection dog in Afghanistan with his handler, Army Spc. Brent Grommet. The two were reunited after three years, and now Matty is Grommet's support dog. (Courtesy of the American Humane Society) 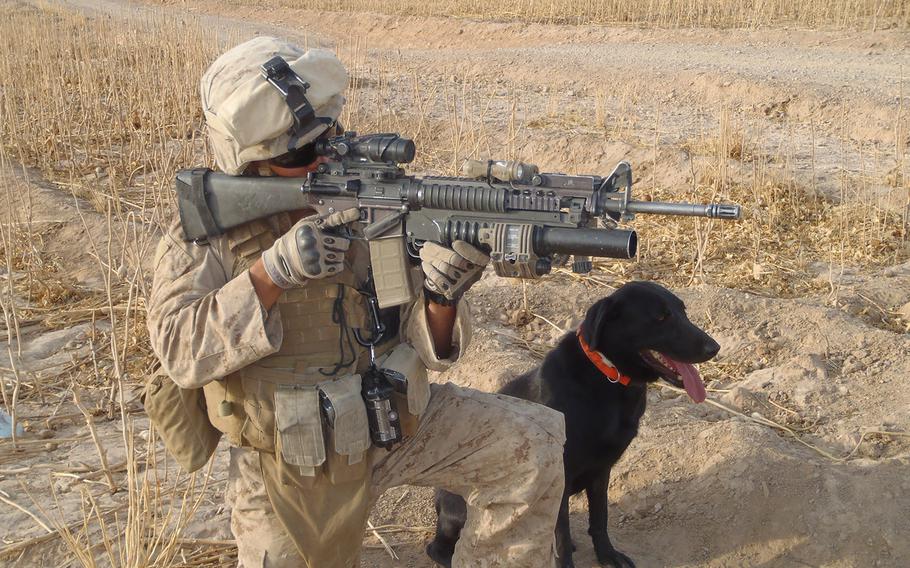 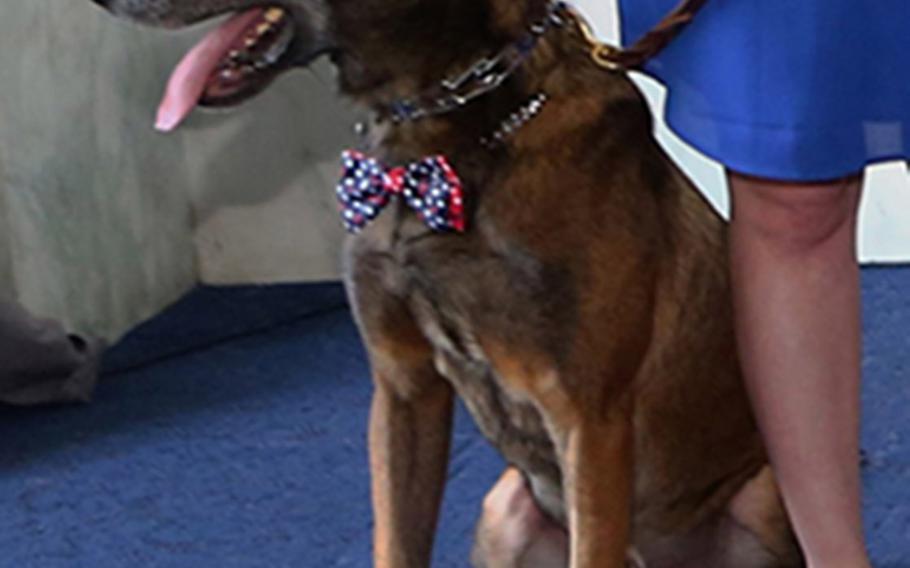 WASHINGTON — During a routine perimeter check in the desert of Afghanistan, Isky found a roadside bomb. He had come to a complete stop, sitting near the explosive device, patiently waiting for orders from his best friend, Army Sgt. Wess Brown.

For his service, he was honored Tuesday on Capitol Hill – along with three other dogs – with the first-ever K-9 Medal of Courage. It is the nation’s highest honor for military dogs, acknowledging their extraordinary valor and service, awarded by the American Humane Association.

Isky and Brown were with 100th Military Working Dog Detachment and have been together since October 2011.

“After he came out of training from Lackland – he was about 18 months old – I was his first handler to certify with him,” Brown, now 27, said.

While most military working dogs can have two to seven handlers, Isky has only had one: Brown.

“I didn’t PCS,” Brown said. If he had, the dog would have gone to a new handler.

“We were on a combat mission, one of many,” Brown said. “To avoid an ambush we had to get into the vehicles fairly quickly. While Isky was running up the stairs, I had a hold of him, but he fell off the side and broke his leg in six different spots.”

The leg had to be amputated.

“Once I knew he got injured and knew what was happening, as soon as his amputation was scheduled and his future with the Army was done,” Brown put in the paperwork to adopt him, he said.

Brown has been separated from Isky for only two weeks, and that was while Isky recovered. Even when Isky isn’t with him, Brown carries his picture.

These days, instead of searching for bombs, Isky suns himself on a porch in Virginia with Brown. He has become Brown’s PTSD service dog, and the two comfort each other.

“I have nightmares, I get night terrors stuff like that,” Brown said. “I’ll wake up, and he’s jumped up in bed with me. He kind of does the same thing. I’ll hear him have bad dreams and I’ll wake him up. For all I know he’s chasing a ball, but it sounds to me like he’s having a pretty rough time in some of these dreams. I’ll wake him up and he jumps right up in bed with me. And we both calm down.”

Brown has been diagnosed with traumatic brain injury and post-traumatic stress, and has three crushed discs in his neck. He is currently waiting to be medically retired from the Army.

Isky hasn’t been trained as a PTSD dog. But his bond with Brown is strong enough that when Brown has an anxiety attack, Isky knows.

“When I look at him, I feel safe because of everything we did together in Afghanistan. If it wasn’t for him and doing what we did, there would be a lot more people unable to go home,” Brown said.

More than 200 Congressional staffers and 19 members of Congress attended the event to honor military working dogs. The other dogs who earned the Medal of Courage:

Matty, a Czech German shepherd, was a bomb-detection dog in Afghanistan. Now retired Army Spc. Brent Grommet, his handler, says that Matty saved his life and the lives of everyone in his unit more than once. The two were wounded together, including being in a truck that was hit by two roadside bombs. They were flown back to the U.S. for treatment, and while Grommet was in surgery, Matty was wrongly given to someone else. The Humane Association helped reunite the two, and now Matty serves as a support dog for Grommet. Fieldy, a black Labrador retriever, served four combat tours in Afghanistan, where he worked to detect explosives. Handler Marine Cpl. Nick Caceres spent seven months deployed with Fieldy in 2011 and adopted him three years later when the lab was discharged. Bond, a Belgian Malinois, worked 50 combat missions and deployed to Afghanistan three times. He was a multipurpose dog with a special operations unit before he retired. Bond suffers from combat trauma and will be reunited with his handler, who will leave active duty in a few months.Email: tibbetts.meredith@stripes.com Twitter: @mjtibbs