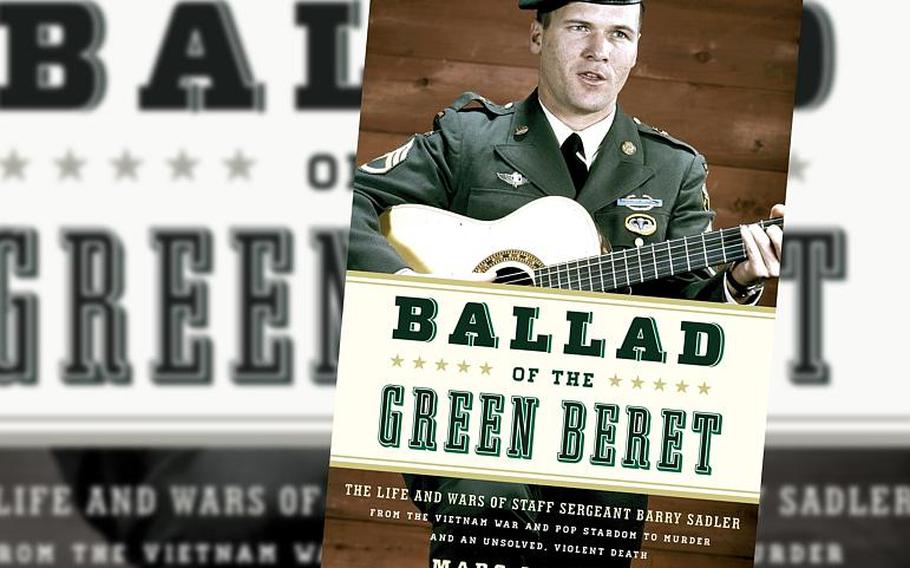 "Ballad of the Green Beret: The Life and Wars of Staff Sergeant Barry Sadler from the Vietnam War and Pop Stardom to Murder and an Unsolved, Violent Death," by Marc Leepson (Book cover courtesy of Marc Leepson)

Ballad of the Green Beret: The Life and Wars of Staff Sergeant Barry Sadler from the Vietnam War and Pop Stardom to Murder and an Unsolved, Violent DeathBy Marc Leepson

The Vietnam War has been chronicled through a stream of books, films and TV series that began flowing well before Saigon fell in 1975. In a new biography, historian Marc Leepson tells a war story we haven’t heard before.

But the book’s action-packed subtitle reveals just how much the average reader stands to learn about its subject. Most readers, if they know Barry Sadler at all, are likely to recall the clean-cut, active-duty Army medic who shot to the top of the pop charts for five weeks in 1966 with “The Ballad of the Green Berets.” It’s the lesser-known, post-fame story about this one-time musical sensation, though, that plays out like an episode of VH1’s “Behind the Music.”

Leepson does an admirable job of representing Sadler, whose shifting stories and penchant for self-aggrandizement regarding his hardscrabble childhood, the origin of “The Ballad” and his activities after the Army made him something of a moving target. Through thorough research and dozens of interviews with people who knew Sadler best or served as Green Berets, the author captures the essence of perhaps the most famous soldier to have fought in Vietnam.

Sadler, who had previously completed a four-year hitch in the Air Force, enlisted in the Army and felt a desire to write a song about Airborne troops upon earning his jump wings in early 1963. Although his accounts about the song’s composition vary, and he continued to revise it, “The Ballad of the Green Berets” became a complete song that year. The song, which was already familiar to his Army buddies, came to the attention of Gen. William Yarborough, the publicity-savvy commander of the Army Special Warfare Center at Fort Bragg, N.C. With the help of an enterprising Green Beret public information officer, Gerry Gitell, Sadler landed a songwriting deal in 1964. By the end of that year, he shipped out to Vietnam. Five months later, fate intervened when Sadler ran into a punji stick while on patrol and a subsequent infection put him in the hospital. Leepson, himself a Vietnam veteran, ends that chapter with a nice piece of foreshadowing: “Barry would walk with a slight limp for the rest of his life.”

It took a few years for the metaphorical limp to become a hindrance. RCA signed Sadler to a recording contract in late 1965 and and his debut album, “Ballads of the Green Berets,” was recorded in a day. The single “The Ballad of the Green Berets” was released in January ’66. It soon shot to the top of the charts, which led to the sales of nine million singles and two million albums. Sadler, though, soon became a victim of his success. The Army, seizing on the opportunity, took Sadler off regular duties and sent him around the country as a human recruiting poster for 15 months. The tour brought adulation, but bred bitterness when the brass declined to send him back into the field. He left the Army in 1967 with the the hopes of making more music and trying his hand at acting.

Sadler remained a staunch supporter of the Vietnam War, an increasingly unpopular conflict to which his fortunes were tied despite “Vietnam” not being mentioned explicitly in his hit song. Some of Sadler’s associates said that had “The Ballad” come out just months later, as the antiwar tide began to rise, he never would have been a pop sensation.

Failing to top the charts might have been the best possible outcome, as Sadler was ill-equipped to handle his sudden fame. He squandered his six-figure royalties from “The Ballad” on women, booze and bad business ventures. In 1978, he killed a lover’s ex-boyfriend and faced a murder charge in Nashville. In part because of his all-American image at the height of his musical success, Sadler avoided substantial jail time. Leepson, who was granted access to the investigating detective’s files, deftly guides the reader through this episode of crime and (light) punishment in vivid detail.

Employing his knowledge of military history, Sadler forged a respectable second act as a pulp-fiction novelist. He wasn’t any more fiscally responsible the second time around. He ended up in Guatemala, where he continued his carousing, ran with shady characters and possibly engaged in shadier activities. In 1988, he took a bullet in the head while riding in a taxicab. Was it a careless accident, or attempted murder?

Although he had control over much of his post-Army life, it’s easy to see Sadler as another casualty of the Vietnam War. As a young man he wished for musical success, but he wanted to be a soldier even more. Then a simple twist of fate took him out of the field and into a recording studio. “I wish that I’d never, ever written that stupid song,” Sadler told one writer in 1971.

Leepson, to his credit, never plays the victim card on Sadler’s behalf. He sticks to the facts, lets those who knew Sadler do most of the talking and holds his subject accountable for his poor choices.

Musically, Sadler wasn’t in the same league as the Beatles, the Beach Boys or the Rolling Stones, who all topped the charts in 1966, and — although he ultimately became one — his hit song was certainly no “Paperback Writer.” So in the hands of a lesser biographer, this balladeer’s story could have been a flimsy clip job covering one of pop’s many one-hit wonders. Instead, Leepson delivers a Vietnam story we haven’t heard before. Like many of the stories tied to that conflict, it stands as a cautionary tale.