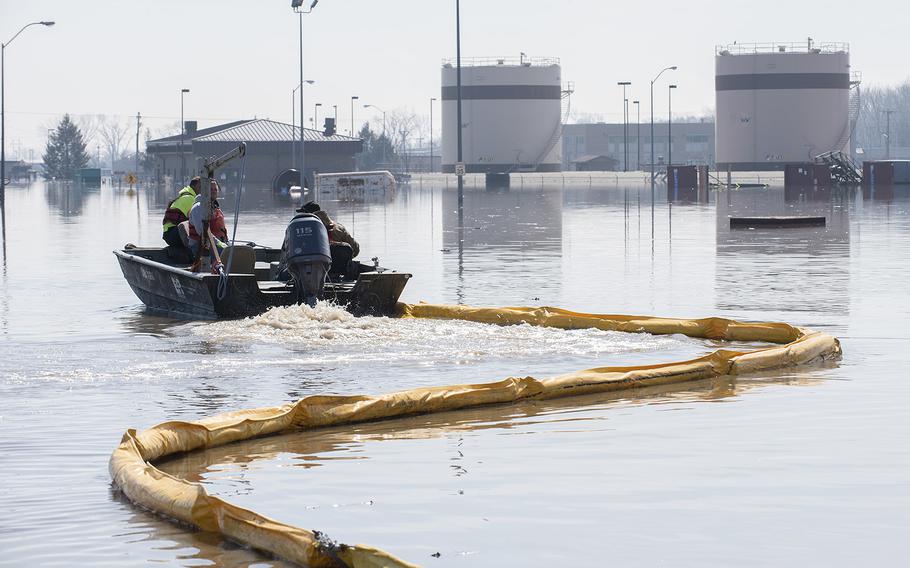 Contracted employees deploy a spill containment boom around the Offutt Air Force Base fuel storage area as a precautionary measure March 18, 2019 following flooding of the southeast portion of the base. (Delanie Stafford/U.S. Air Force)

Contracted employees deploy a spill containment boom around the Offutt Air Force Base fuel storage area as a precautionary measure March 18, 2019 following flooding of the southeast portion of the base. (Delanie Stafford/U.S. Air Force) 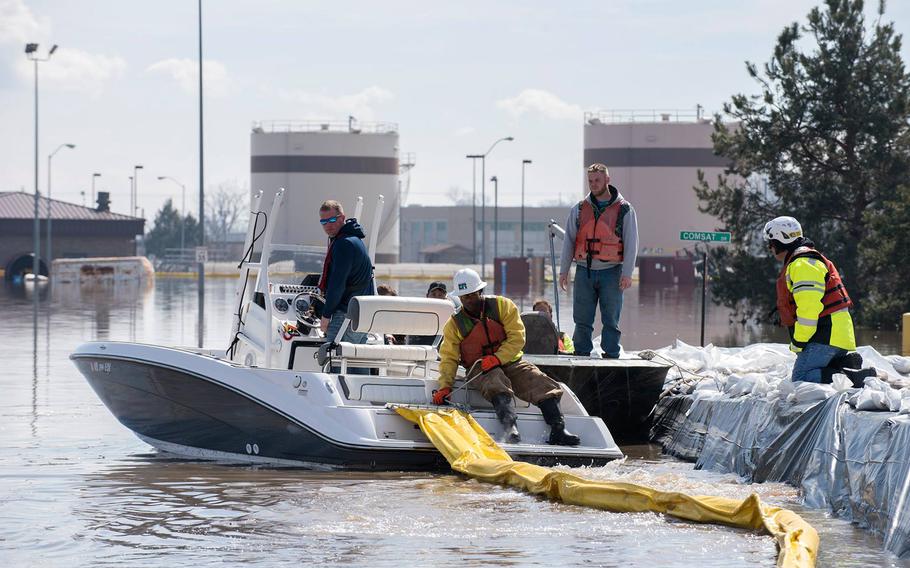 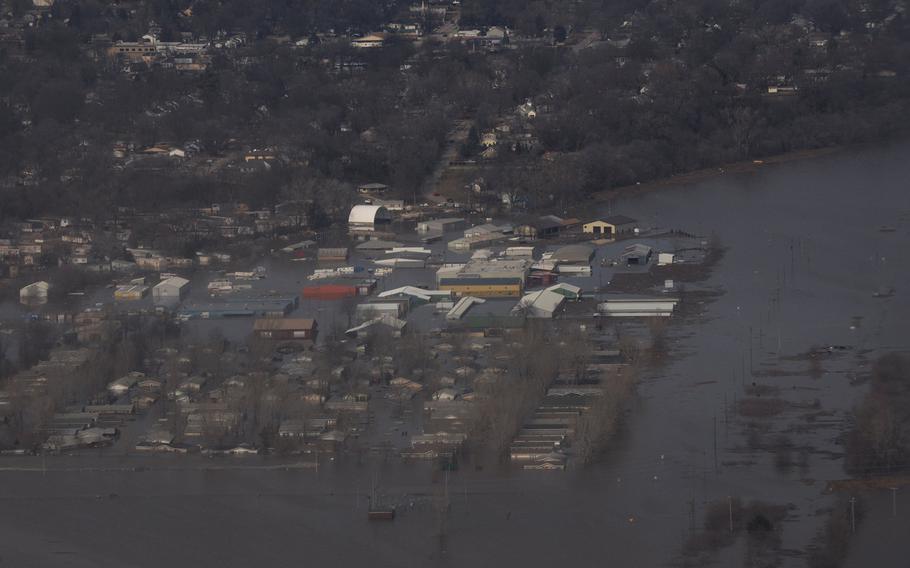 Water continues to recede at Offutt Air Force Base and Camp Ashland in Nebraska, allowing work crews to enter and assess damage at buildings that flooded nearly a week ago when heavy rains and melting snow upstream overwhelmed levees and shorelines along the Missouri and Platte rivers.

Crews have entered 10 of the 30 buildings at Offutt that flooded when water began rising March 15 at the base that is home to U.S. Strategic Command and sits just west of the Missouri River near the city of Bellevue, said Ryan Hansen, spokesman for the 55th Wing, which oversees operations at the base.

“It’s a very methodical process,” Hansen said Friday. Personnel with expertise in bioenvironmental hazards and engineering entered the buildings first to make certain they were safe, then people familiar with the facility came in to begin cleaning. The wing’s maintenance facility on the edge of the flooded southeastern portion of the base was the first building entered. Between its on- and off-base facilities, Offutt encompasses about 4,000 acres.

“It was pretty messy with mud and all sorts of (debris) from the water,” Hansen said. “We are going through to see what is salvageable.”

Next, a contractor will come through to see what can be renovated and what should be replaced. It’s similar to the recovery process following the damage Hurricane Michael left in October at Tyndall Air Force Base in Florida, Hansen said.

Water still remains in about half of the buildings that were flooded, but with sunshine in the forecast, officials expect water to continue to recede.

By Wednesday, the flooded runway was cleared of water and crews quickly cleaned it of debris. Before air traffic can resume, Hansen said a team of inspectors needs to inspect the runway. That should happen in the coming days, he said.

Offutt has about 6,500 airmen and the 55th Wing is the Air Force’s only unit to fly the RC-135, a fixed-wing reconnaissance aircraft. At any given time, the wing has about 700 airmen deployed. The flooding at Offutt will not impact that mission, Hansen said.

States along the Missouri River continue to deal with the aftermath of flooding, following historic amounts of snow in areas north. Heavy rains in recent weeks melted much of that snow, sending it downstream where it overwhelmed communities along the banks.

Along the Platte River, the Nebraska National Guard base Camp Ashland completely flooded. On Friday, water receded enough to allow crews to access the base and begin to assess damage.

The floodwaters left behind an “astounding” amount of sediment and silt that will take a significant clean-up, said Lt. Col. Kevin Hynes, a public affairs officer in the Nebraska National Guard.

Camp Ashland, which sits on the east and west sides of the river, is a primary training and education center for the state’s Guard, the region’s Army Reserve and active-duty servicemembers. Noncommissioned officer education makes up the bulk of classes offered at Ashland, but truck drivers and future officers also attend classes on site. Prior to flooding, 225 soldiers were evacuated and are continuing a noncommissioned officer course at an Omaha readiness center, Hynes said.

Going forward, training will shift to the Guard’s Greenlief Training Site in Hastings, he said.

Camp Ashland flooded about four years ago, but Hynes said that was a different situation. A tremendous amount of rainfall south and west of Lincoln flowed through a creek watershed and very slowly flooded the base.

In last week’s flooding, the river simply flowed over the levees. The buildings built on stilts, mostly school rooms, offices and barracks, seemed to have cleared floodwaters, Hynes said. However, older facilities along the river flooded.

“It’s been an historic event for Nebraskans across the state,” Hynes said.