Navy report tells a tale of chaos and terror aboard Fitzgerald 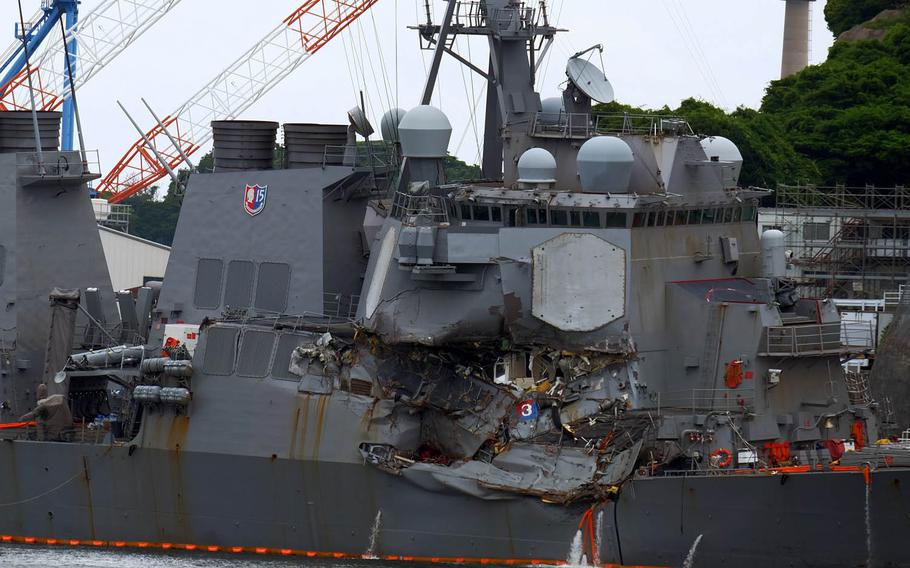 The Navy destroyer USS Fitzgerald, which was involved in a collision with a merchant ship Saturday, June 17, 2017, is seen at Yokosuka Naval Base, Japan, Sunday, June 18, 2017. (Tyler Hlavac/Stars and Stripes)

WASHINGTON — For the 35 sailors in Berthing 2 on the USS Fitzgerald, June 16 was a normal night, with the deployed ship steaming in calm seas. All that would change within hours, as the Fitzgerald and a civilian cargo ship collided, killing seven.

The ship was acting under “darkened” conditions after nightfall, with all exterior lights turned off except basic navigation lights meant to warn other ships that the vessel was present amid darkness. Interior lighting was switched from white to red to reduce the visual signature of the ship. It was under “Modified Zebra” conditions to facilitate crew rest, and all interior hatches were secured to mitigate the risk of flooding or fire.

By 1:30 a.m. June 17 the Fitzgerald was about 56 nautical miles from its homeport of Yokosuka, Japan, when the collision happened, according to a Navy report released Wednesday.

The captain and most of the senior officers were in their quarters, and 35 sailors were in triple-racked bunks in Berthing 2. The ACX Crystal cargo ship struck the Fitzgerald under the waterline on the starboard side near the bow, along an entry space near Berthing 2.

It created a 13-by-17-foot hole and ruptured the non-watertight door to Berthing 2. The wall suporting the door bent to nearly 90 degrees, and seawater rushed in unimpeded.

The ship immediately began to list to port, the report said. The situation in Berthing 2 was catastrophic and terrifying for sleeping sailors, who woke to the massive collision and the rush of seawater. An alarm was sounded for 2 seconds at 1:32 a.m., the report said.

Berthing 2 was in complete chaos. The space flooded within a minute. Debris made evacuation difficult, but sailors lined up calmly to exit — despite being up to their necks in water — according to procedure.

Twenty eight sailors made it out through the port-side scuttle hatch. Seven others died inside.

Sailors describe trying to assist others climbing through the scuttle door, but rapidly rising water forced many of them to stop. The last sailor rescued was in the bathroom at the time of the collision and barely escaped. The two sailors assisting others went on to help when it appeared water was running out of Berthing 1.

This was the first of two deadly collisions that the Navy is investigating. The USS McCain collided with another civilian ship in July, claiming the lives of 10 sailors. The Navy is planning to release full reports on both incidents this week.