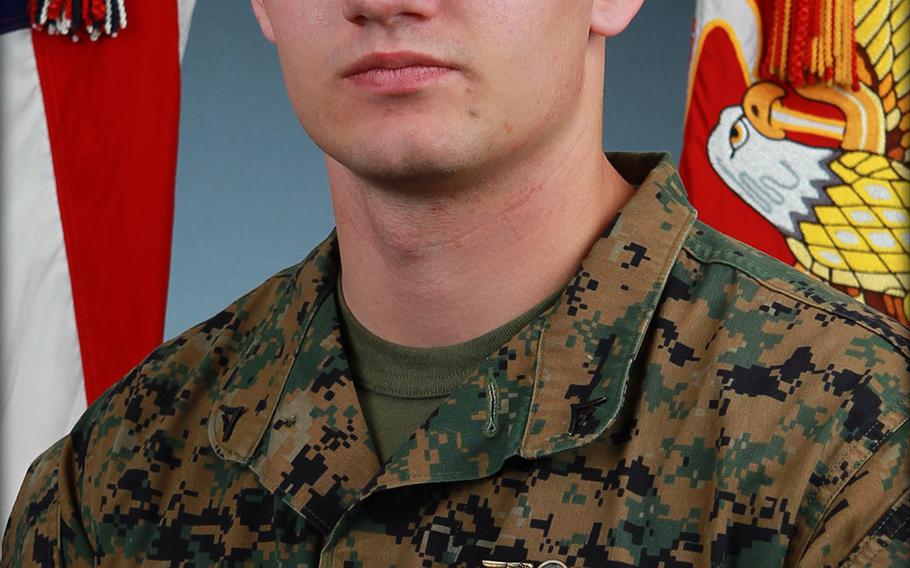 MANAMA, Bahrain — The U.S. Navy on Friday identified the missing U.S. Marine who is presumed lost at sea after he bailed out of an MV-22 Osprey when it lost power after taking off from the amphibious assault ship USS Makin Island.

The U.S. Navy ended the search Thursday in the northern Persian Gulf for Cpl. Jordan L. Spears, 21, of Memphis, Ind., who embarked on the Makin Island as part the 11th Marine Expeditionary Unit. He was a tiltrotor crew chief working with the 11th MEU's aviation combat element. He was assigned to I Marine Expeditionary Force and based at Marine Corps Air Station Miramar, Calif.

Spears was one of two aircrew members who went into the water Wednesday when it seemed the Osprey might crash. The other aircrew member was rescued and is in stable condition aboard the Makin Island, officials said.

The Osprey’s pilot was able to regain control of the aircraft and return to the ship. The Navy said the plane was participating in flight operations to support the military’s mission in Iraq and Syria.

“U.S. Navy, Marine Corps and Coast Guard personnel conducted an extensive search of the area using all available assets, which continued throughout the night and the next day,” the Navy said in a news release.

"Cpl. Spears was a cherished member of our MEU family, and he fulfilled a key role in our aviation combat element," Col. Matthew Trollinger, commander of the 11th MEU, wrote on the unit's official Facebook page. "His absence will be felt throughout the unit. My heart goes out to his family, and they will remain in our thoughts and prayers."

Prayers and expressions of support poured onto the Makin Island’s official Facebook page as news of the incident reached family and friends at the ship’s San Diego home port.

“This has been on my heart all day, my prayers are with the family and the ship,” Ruth Tedrahn of San Diego wrote on the Facebook page.

The Makin Island, along with its amphibious ready group that includes the 11th Marine Expeditionary Unit, left home on July 25. Last month the ship arrived in the Middle East, where it relieved the Bataan Amphibious Ready Group in the Persian Gulf and has been conducting operations in Iraq and Syria against the Islamic State.

Last month, all 25 personnel aboard a Marine CH-53E Super Stallion helicopter survived after it crashed in the Gulf of Aden while attempting to land aboard the USS Mesa Verde.