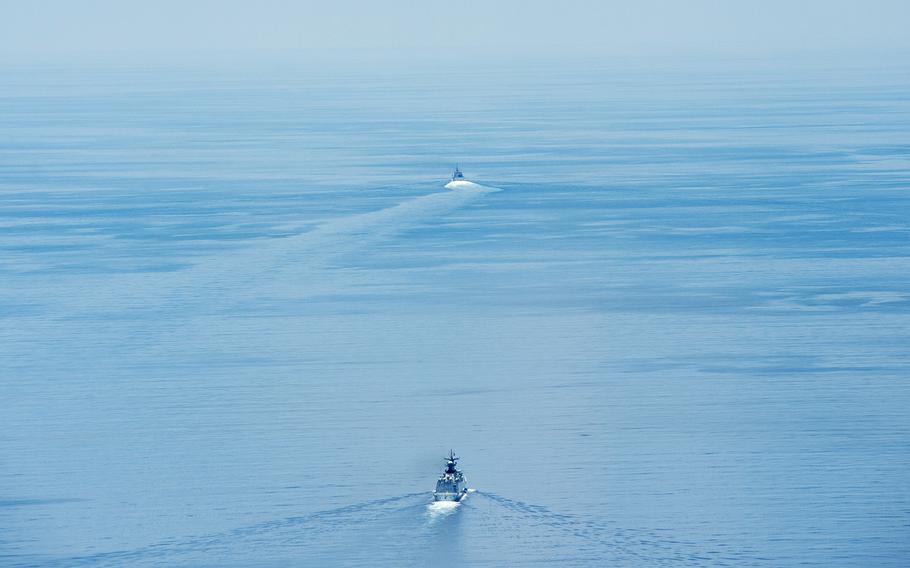 The littoral combat ship USS Fort Worth conducts routine patrols in international waters of the South China Sea near the Spratly Islands as the People's Liberation Army-Navy guided-missile frigate Yancheng sails close behind on May 11, 2015. (Conor Minto/U.S. Navy)

WASHINGTON — For the first time in more than three years, the United States could soon sail a warship within 12 miles of the man-made islands that China claims in the South China Sea, a U.S. defense official said Thursday.

The official, who was not authorized to discuss the issue and spoke on condition of anonymity, said the decision to conduct a “freedom of navigation operation” into the water surrounding the disputed Spratly Islands has not been made and would require White House approval. According to international maritime law, a nation can claim water extending 12 nautical miles from its coasts as sovereign territory.

Sailing a U.S. Navy ship into those waters would signal that the U.S. does not recognize China’s claims of the islands and considers the area international waters.

“U.S. forces are present and active in and around the South China Sea and East China Sea on a daily basis,” said Navy Cmdr. Bill Urban, a Department of Defense spokesman. “In addition, we have one of the most robust — if not the most robust — freedom of navigation programs in the world. Beyond that, I can’t comment on current or future operations.”

One destroyer is conducting “presence operations” in the South China Sea, designed to reinforce the U.S. ship’s right to be there, Hawkins said.

“We have been clear that our forces will fly, sail and operate in the Asia-Pacific region wherever international law allows, just as we do elsewhere,” he said. “The South China Sea is international waterspace where the U.S. Navy ships and aircraft operate routinely, and they will continue to do so. Our presence in the region has been pivotal in helping maintain peace and stability for decades.”

China claims most of the South China Sea, in which about $5 trillion of ship-borne trade passes each year, as its territory, including the Spratly Islands. The Philippines, Vietnam, Malaysia, Brunei and Taiwan also claim territory in the disputed region.

David Shear, assistant secretary of defense for Asian and Pacific security affairs, last month told the Senate Armed Service Committee that the U.S. has not sailed within 12 nautical miles of the disputed territory since 2012.

It was not clear what China’s reaction would be to the U.S. entering the area it considers Chinese territory. Beijing, according to the Associated Press, issued a formal protest over a May incident when a U.S. Navy surveillance aircraft flew over Fiery Cross Reef, one of China’s claimed territories.

The potential development comes just weeks after the commander of U.S. Pacific Command expressed his concerns to Congress about the buildup of the islands, which include runways likely to be used for military operations.

Adm. Harry Harris called China’s building of those airfields a “great concern militarily” in testimony Sept. 17 to the Senate Armed Services Committee. He said PACOM was considering conducting freedom of navigation operations near the islands.

“I believe that we should exercise — be allowed to exercise freedom of navigation and flight … in the South China Sea,” he said.